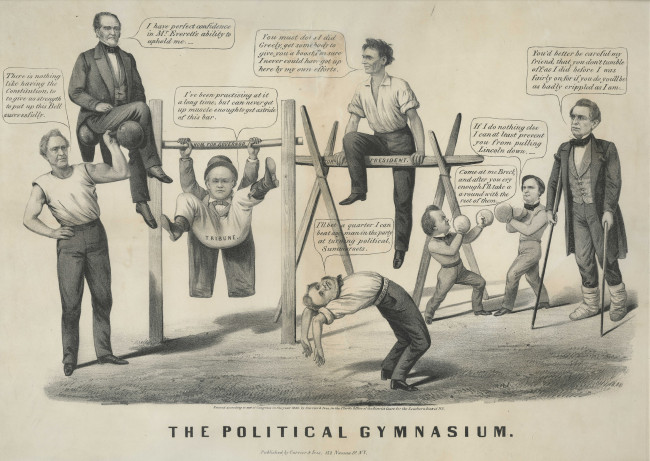 Currier & Ives was an internationally known New York printmaking company that operated between 1857 and 1907. They were prolific printers of political lithographs that were mass-produced for the public. They tried to remain nonpartisan, producing satirical political cartoons critical of all of those in politics, government, and journalism.

We recently acquired one such lithograph to be included with our William Henry Seward holdings, entitled, “The Political Gymnasium” and features candidates and their supporters during the 1860 presidential election taking part in various athletic activities.

Placing the figures in an athletic environment is meant to symbolize the competitiveness of the election and highlight the strengths and weaknesses of the presidential nominees. Bell sits on a barbell being lifted up by his running mate Everett, who states, “There is nothing like having the Constitution, to give us strength to put up this Bell successfully.” Bell responds, “I have perfect confidence in Mr. Everett's ability to uphold me.”  Lincoln supporter Greeley tries rather clumsily to climb atop a bar labeled “Nom. for Governor,” saying, “I've been practising (sic) at it a long time, but can never get up muscle enough to get astride of this bar.” Lincoln, who has successfully climbed over the bar labeled “For President,” responds, “You must do as I did Greely, get somebody to give you a boost, I'm sure I never could have got up here by my own efforts,” harkening to Greeley’s influence in the press to garner powerful support for Lincoln’s nomination.

Webb is front and center, posed in the middle of a backwards somersault. He says, “I'll bet a quarter I can beat any man in the party at turning political Summersets,” poking fun at his conversion from Whig to Republican in the 1850s. Between Lincoln and Seward stand Douglas and Breckinridge, the Northern and Southern Democratic nominees sparring with each other in boxing gloves. Douglas says, “Come at me Breck, and after you cry enough, I'll take a round with the rest of them,” to which Breckinridge responds, “If I can do nothing else I can at least prevent you from pulling Lincoln down.”

Lastly, Seward stands to the side on crutches, his feet in bandages. He warns Lincoln, “You'd better be careful friend, that you don't tumble off; as I did before I was fairly on, for if you do you'll be as badly crippled as I am,” referring to his unexpected loss of the nomination and his status as an onlooker rather than a contender in the election.

This item is an interesting and important piece that helps us understand the political landscape surrounding this important, rather tumultuous 1860 election. With slavery as a major divisive issue throughout the country, many politicians feared, and rightly so, that the election of Lincoln would lead to war. This election saw the Democratic Party split into two factions, dividing voters and ultimately leaving both parties unsuccessful. The William Henry Seward papers are full of correspondence, speeches, and newspaper articles surrounding this election, including telegrams documenting Seward’s loss of the presidential nomination and Lincoln’s request to appoint Seward as Secretary of State. For more information view the finding aid or contact rarebks@library.rochester.edu

Alison Reynolds, the William Henry Seward Project Archivist, leaves us today, after three years on this important project. Alison’s work and role have been a great asset to the River Campus Libraries and to the University of Rochester, as well as to the legions of scholars, students, and other interested parties who have worked with the Seward Family Papers and related collections.

We wish Alison all the best in her next adventure!