The Fasciculus Temporum is a compendium of both ecclesiastical and secular world history, from the biblical genesis to the 15th century. 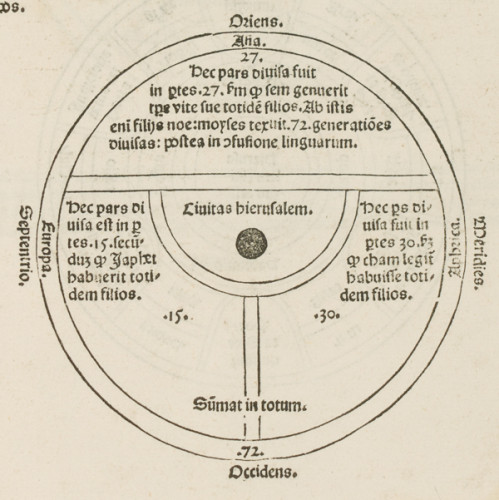 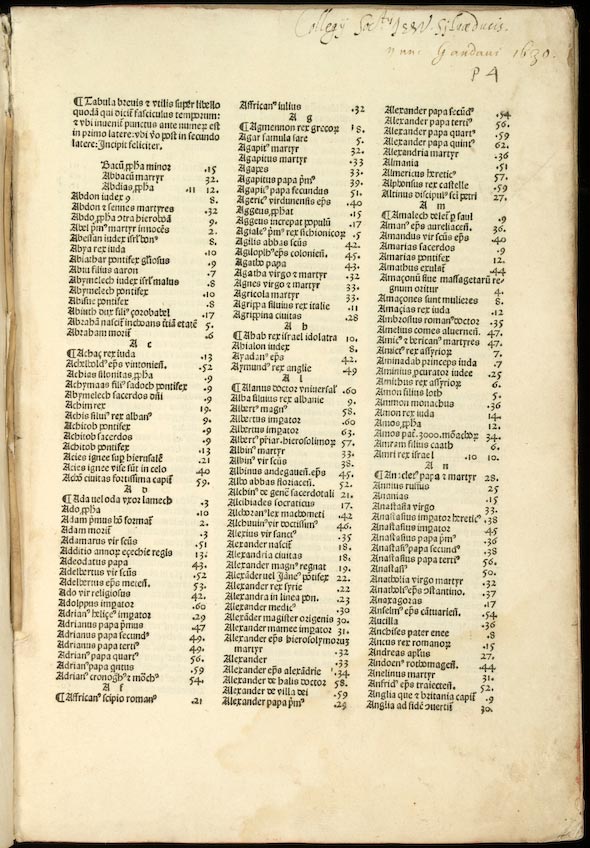 Acccording to the ownwership inscriptions on the first page of the index, the book was held in the Jesuit College at 's-Hertogenbosch (Collegii Soctis Jesu. Siluaducis), and then was transferred to the College at Ghent (Gandaui) in 1630. A possible explanation for this is that the Jesuit College in Ghent was fairly new and was developing its library at the time. This move might be also linked to the fact that the Spanish lost the city of 's-Hertogenbosch to the Dutch when Prince Frederick Henry of Orange capured it in 1629.* Drawing from three different endowments—Metzdorf, Olsan, Hoeing— this copy was purchased a decade ago from Daniel De Simone, then a rare book dealer, now Curator of the Lessing J. Rosenwald Collection at the Library of Congress. The book was added to our collection in December of 1999. 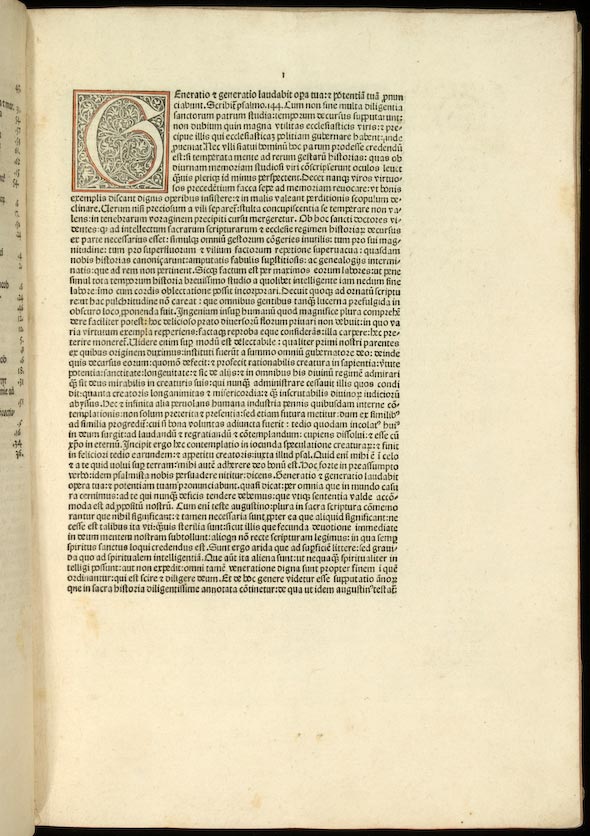 The Fasciculus Temporum is a compendium of both ecclesiastical and secular world history, beginning with the biblical account of the genesis up to more recent events such as the invention of printing. For instance, following an entry for the year 1457, we read the following reference: Et impresores librorum multiplicantur in terra (64r). The author of this chronicle, Werner Rolewinck, was born in Westphalia in 1425 and educated in Cologne where he entered the Carthusian cloister of St. Barbara in 1447. First printed in Cologne in 1474, the Fasciculus Temporum would become immensely popular in the next three decades. In fact, we know of at least 33 incunable editions, and the text continued to be printed in the following century. Moreover, in scope and content, the Fasciculus Temporum greatly influenced the most popular world chronicle of the fifteenth century: Hartmann Schedel's Liber cronicarum (Nuremberg: Anton Koberger, 1493), which is commonly known as the Nuremberg Chronicle. 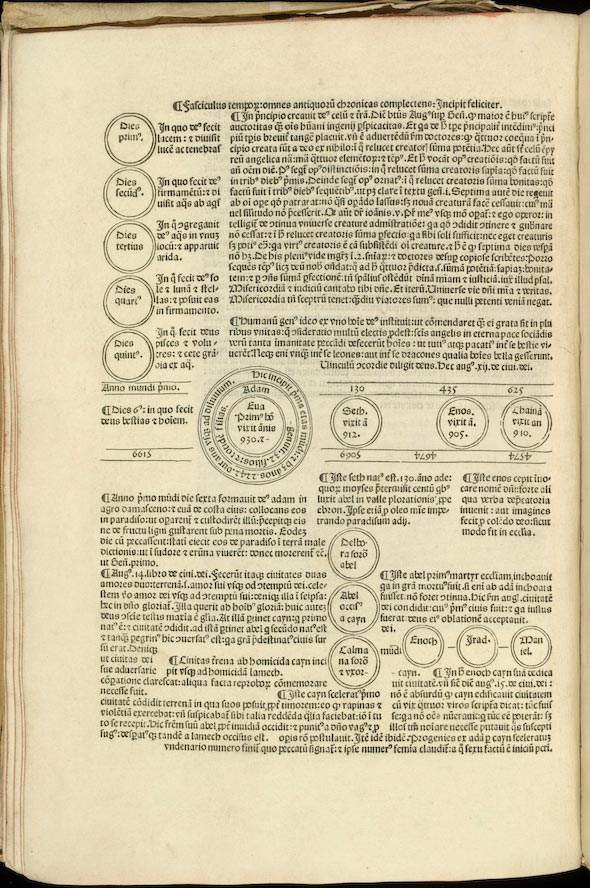 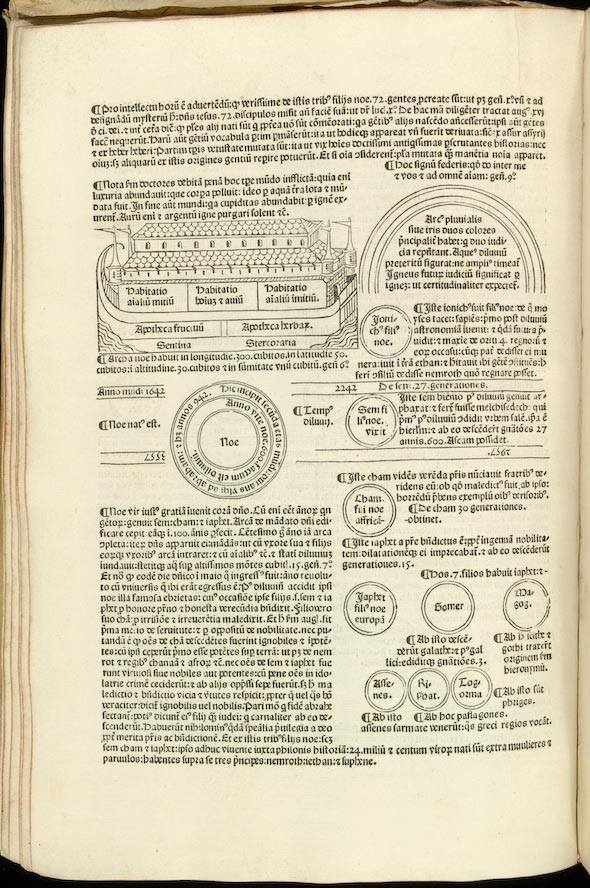 In the Fasciculus Temporum events are presented in a complicated page design intended to convey the relative importance of each chonicled historical episode as compared to the great events of Christianity. Thus, a woodcut strip across the center of each page is separated from the rest of the text located above and below by two sets of lines. Inside this band the reader would see one, two or more circles in which appear the names of Hebrew legendary figures from the Old Testament—starting with Adam—popes, and saints. Within each circle is a statement of each's individual's length of life or, as in the page displayed below, the length of a particular papacy: Hilarius was Pope for six years, three months, and six days. Above the circle is shown the date from the creation of the world (anno mundi), which was established as 5199 B.C., and below them the number of years before and after the birth of Christ—the B.C. dates are printed upside down. Whereas the upper section of the page is devoted to biblical and ecclesiastical history, the lower part includes secular events. For example, we can learn about what the fifteenth-century chronicler commonly knew on the origin and history of the city of Venice. In this and other editions, most of the woodcuts depicting cities are merely archetypical representations. However, the woodcut of Venice is an exception: many fifteenth-century readers would have recognized the façade of il palazzo di Doge (37v). To be precise, this woodcut is the second earliest printed depiction of Venice. In the previous year, George Walch had included a woodcut representation of the city in his edition of the Fasciculus Temporum(Venice: Georgius Walch, 1479).

The German printer Erhard Ratdolt is perhaps best known for the introduction of three-color astronomical diagrams, and geometrical graphics in general, in printed books. His edition of Euclid's Elementa (May 25, 1482), for example, is indeed a milestone in the history of printing. Moreover, he was also an innovator in the design of the page itself. Instead of printing a "guide letter" in the center of a large blank space reserved for the manual rubrication of initials, he employed richly ornamented woodblocks, as shown in the first image above. Originally from Augsburg, Ratdolt traveled to Venice, which was then the most important publishing center in Europe. According to the evidence from his book production, he spent at least a decade in this city, from 1476 to 1486 (Redgrave, 1894).

While none of the early printed editions of the Fasciculus Temporum included a map, Ratdolt decided to insert a woodcut map in this 1480 edition, the first of four editions he published in Venice. Oddly, the map is included again only in the third edition of 1484, being absent in the 1481 and 1485 printings (Campbell, 1987: 142). 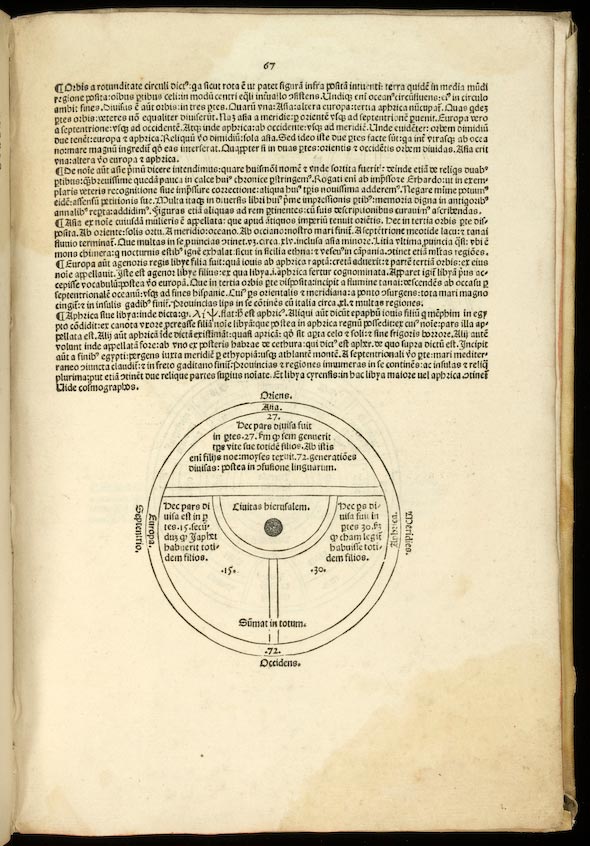 The map belongs to the T-O type, a convention scholars use for an early cartographic form whose origin goes back to the theories of the Ionic philosophers of the fifth century B.C. Ratdolt probably copied one of the many Christian versions that widely circulated in the Middle Ages. Overall, these T-O maps include the four points of the compass, East (Oriens) at the top, West (Occidens) at the bottom, and North (Septentrio) and South (Meridies) on the left and right respectively. A T divides the O, or hemisphere, into the three continents of Asia, Europe, and Africa. These maps would often show the Tanais and Nile rivers on the cross of the T, and the Mediterranean as its downstroke (Woodward, 1985: 510-21; Campbell, 1987: 1). The Ratdolt map does not depict these three rivers, but adds an innovative feature: the city of Jerusalem (civitas hierusalem) is prominently displayed in the middle of the map. Finally, according to the medieval tradition, in the Ratdolt diagram the three continents are associated with the names of the sons of Noah, who were responsible for populating them, Shem (Asia), Ham (Africa), and Jafet (Europe). The graphic also includes precise information on the subdivision of Asia (27 parts), Europe (15 parts), and Africa (30 parts).
*I owe the explanation of this provenance to John Goldfinch, Head of Incunabula and Early Western Printed Collections at the British Library.

Redgrave, Gilbert R. Erhard Ratdolt and his Work at Venice. London: The Bibliographical Society at the Chiswick Press, 1894.