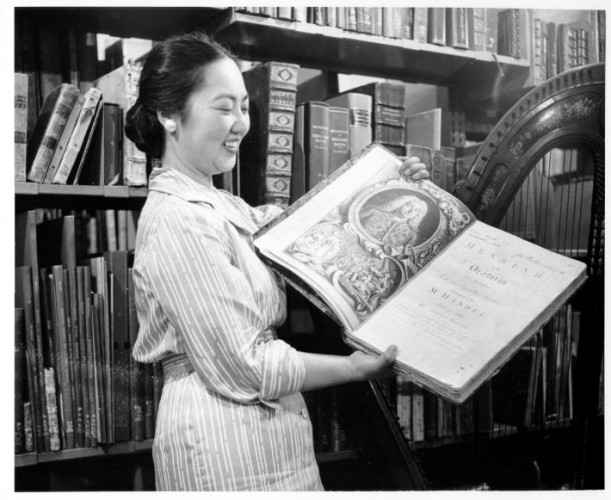 Ruth T. Watanabe served as the head of the Eastman School of Music’s Sibley Library for thirty-seven years. During her time there, Watanabe devoted herself to expanding Sibley’s collections, developing and hiring staff, creating a rare books department, a conservation laboratory, and a reading room. As the head of the largest music library in the United States, Ruth T. Watanabe was integral to Sibley Library’s growth and success and remains an important figure in University of Rochester history to this day.

As a Japanese-American woman born in 1916, Ruth Watanabe grew up in a segregated and prejudiced United States and had to overcome obstacles to be successful. After Japan’s attack on Pearl Harbor on December 7th, 1941, President Franklin Roosevelt issued Executive order 9066 that declared the United States would incarcerate all people of Japanese descent in order to prevent espionage. In addition to interning people of Japanese descent, the US Department of War froze all Japanese banking accounts and financial assets. The Pearl Harbor attack followed by the executive order resulted in a wave of anti-Japanese crimes, attitudes, and discrimination, and the internment of Japanese people for the duration of WWII was extremely damaging and culturally traumatizing for all the Japanese-Americans involved.

Ruth Watanabe was one of the thousands of imprisoned people. In 1942, Ruth Watanabe was a twenty-six year old college student who had just completed her bachelor’s degree along with two masters in music from USC. Though she had plans to continue her education and obtain her PhD, she was forced to leave everything behind for the internment camps. During her time Santa Anita Assembly Center, Watanabe spoke to others at the camp about music and would play recordings. Though she sought out opportunities to further her musical education, she was unable to leave the camp, and instead began to teach music at a children’s center on site. One day, however, Howard Hanson, Eastman school of music’s renowned director, sent her a telegram offering Watanabe a fellowship. She immediately accepted, and started working at Sibley Library as soon as she enrolled as a graduate student. 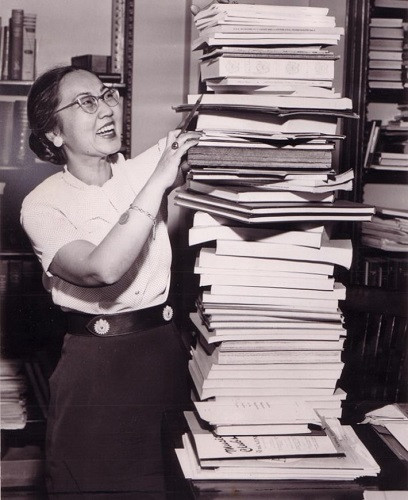 {Ruth Watanabe standing near a tall stack of publication]

Over time, Ruth Watanabe progressed up the ranks of Sibley Library from Page to the head of circulation in 1944 to a full-out librarian in 1947. By her retirement in 1984, Watanabe had established herself as an astute and capable music librarian. As Carol June Bradley writes in her biography of Ruth Watanabe, “…Ruth was a pivotal person in American music librarianship, bridging the era of "first generation" music librarians and the second generation… she developed an outstanding academic music library… and as a person, she has warmed our hearts and enriched our lives” (Bradley).

If you are interested in learning more about Ruth Taiko Watanabe, Rare Books contains several articles from the Rochester Review covering her life. Her books as well as books published in her honor can be found at Sibley Library and the Ruth Taiko Watanabe Special Collections.

by: Eleanor Lenoe '21. Eleanor worked as the RBSCP Manuscript Paging Clerk until she graduated in 2021.