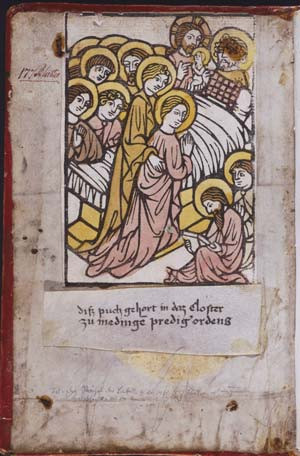 This bound fifteenth-century manuscript, Der Stachel der Liebe (The Thorn of Love), was written on paper in the hand of three scribes, the manuscript is a German translation of the Latin Stimulus Amoris, a thirteenth-century mystical treatise. According to a note affixed to the manuscript, it once belonged to the Dominican Convent at Maria Medingen (near Donauwörth in Bavaria) and was sent there from Nuremberg. Hiram W. Sibley purchased the manuscript in Germany and donated it to the University of Rochester Library in 1930.

The most significant feature of the manuscript is the woodcut pasted to the inside front cover. The woodcut depicts the Death of the Virgin and dates from 1420-30, making it one of the earliest European woodcuts in an American library.