The Thomas E. Dewey papers at the University of Rochester consist of over 1,500 boxes and nearly 500 scrapbooks, audiovisual items, and objects. 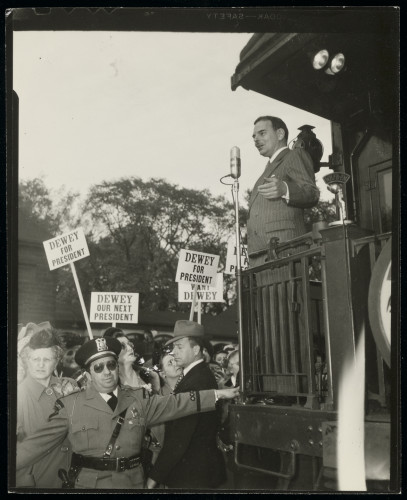 If you asked the average American what they know about Thomas E. Dewey, governor of New York State and a two-time Presidential loser, they will most likely point to the famous photograph of a grinning Harry Truman holding up a copy of the Chicago Daily Tribune that proclaims “Dewey Defeats Truman.” However, his work had an impact in many aspects of New York City, New York State, and national policy between 1930 and 1955.

The Thomas E. Dewey papers at the University of Rochester consist of over 1,500 boxes and nearly 500 scrapbooks, audiovisual items, and ephemeral objects related to all aspects of Dewey’s life. The papers cover his early career as a lawyer in private practice, a range of public roles, including Special Prosecutor, Investigation of Organized Crime, District Attorney of New York County, three terms as governor of New York, and three Presidential campaigns (two as the Republican nominee), and a return to private life and private law practice.

The papers came to the University in 1955, not long after his third term as governor ended. A University of Rochester history professor, Glyndon G. Van Deusen, had been hoping for the papers since at least 1950, but when Dewey ran for reelection, the donation was put on the back burner. On December 3, 1954, the Rochester Democrat and Chronicle noted that this decision “is being criticized in both state and private circles on the grounds the records will not be easily available for research purposes, and the papers, of considerable monetary value, belong more properly in the State Library.” It is not clear why the Governor chose to donate the papers to UR. Dr. Van Deusen could point to the recent (1951) gift of William Henry Seward’s papers to the library as an example of a great American statesman’s papers being donated and then used for scholarly work. Twelve tons of the Governor’s records were trucked from Albany to Rochester, and additional material was donated by Dewey and his wife in 1967. Over time, a detailed finding aid and online index were created for the collection.

This collection has been used by authors writing biographies of Dewey and his presidential runs, and by many academics focused on specific aspects of his work, including New York State and national politics. The collection is heavily used, and the topics it is consulted for include:

What makes this collection unusual is that there is a strong interest in it from amateur historians and independent researchers interested in organized crime, in particular Charles “Lucky” Luciano. The collection contains records from and about Luciano from Dewey’s time as District Attorney and records from the Herlands investigation of organized crime in 1954. Williams Herlands, Dewey's director of investigations for the State of New York, was instructed to establish the facts regarding the pardon of Luciano for services to U.S. Naval Intelligence during World War II. This material contains transcripts of testimony by witnesses, background files on Luciano, and the text of the Herlands Report and appendices.

While some researchers use material from Dewey’s presidential runs (and losses), these records are used less overall compared to other parts of this collection. Researchers’ interests are for the most part focused on Dewey’s many successes and accomplishments, including his crimefighting days.

This blog post was adapted from: "The Enduring Value of Defeated Presidential Candidate Papers, "  a talk and paper from MARAC’s Spring 2021 conference.