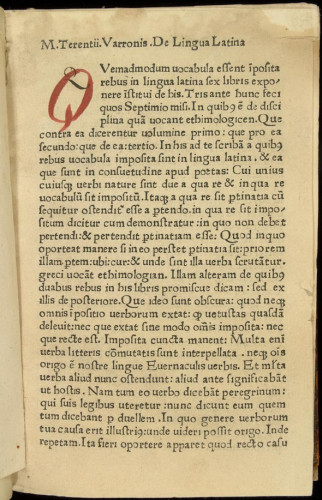 This Roman edition is the editio princeps of De lingua latina and the first work of Marcus Terentius Varro to be printed. Unfortunately, our copy is missing the first ten leaves, which included a letter addressed to Bartholomaeus Platina, a summary of the De lingua latina, and a mention to Laetus' editorial work on the text.

Marcus Terentius Varro was born at Reate, a small town located north-east of Rome. Following his studies first at Rome with L. Aelius, and then at Athens with the philosopher Antiochus of Ascalon, Varro engaged in a public career that culminated in the praetorship and service under Gnaeus Pompeius Magnus (Pompey the Great) during the Civil War. After the defeat of the Pompeian side in the battle of Pharsalus (48 B.C.), Varro received Caesar's pardon and was requested to organize the first public library at Rome. However, he never completed the task and after the assassination of Caesar he was sent into exile by Mark Antony. Varro's private library at Casinum was plundered, but he managed to escape and devote the rest of his life to scholarship (Kaster, 2003: 1582). In the Noctes Atticae (3.10.17) Aulus Gellius records that Varro had stated in the Hebdomades that, by the beginning of his 78th year, he had completed 490 books. Currently, we know of 55 titles, and it is plausible that, as F. Ritschl argued (Ritschl, 1877: 419-505), his opera omnia included 74 works distributed in 620 books. This estimation is largely based on a catalogue of Varro's writings included in a letter by Jerome (33.2), who provides the titles of 47 or 48 works in 490 books, adding that he had hardly listed half of them. Nevertheless, only two of Varro's works have survived substantially: a treatise on farming written in dialogue form, De re rustica, and a study on different aspects of the etymology, morphology and grammar of the Latin language, De lingua latina.

De lingua latina originally consisted of 25 books, six of which (5-10) are extant with considerable lacunae—only books 5 and 6 have survived entirely. The manuscript tradition of this surviving portion comes from an archetype, Florence, Laur. 51.10 (F), written in a Beneventan hand (South Italian minuscule) at the Benedictine monastery of Montecassino in the last decades of the eleventh century. This manuscript also contains Cicero's Pro Cluentio, and Ad Herennium. In 1355 Boccaccio visited Montecassino and obtained a copy of this manuscript which, transcribed in his own hand, he sent to Petrarch. Regrettably, this manuscript is not extant and, apart from F, scholars must rely on copies made in the fifteenth and sixteenth centuries, of which the best is thought to be Laur. 51.5 (f) (Reynolds, 1983: 430-1). The editor of our edition, Julius Pomponius Laetus (1425-1498), followed a manuscript whose readings are similar to those of the fifteenth-century Turin 1394 I. III.10. In turn, the Turin manuscript derives from a pre-humanistic tradition, containing numerous corrupted readings that Pomponius Laetus sometimes failed to correct or improve (Ferrero, 1949-50: 130-60). For instance, it is significant that Turin 1394 I. III.10 lacks the transcription of Greek terms as it is also shown in the alarming gaps of our copy of the editio princeps. 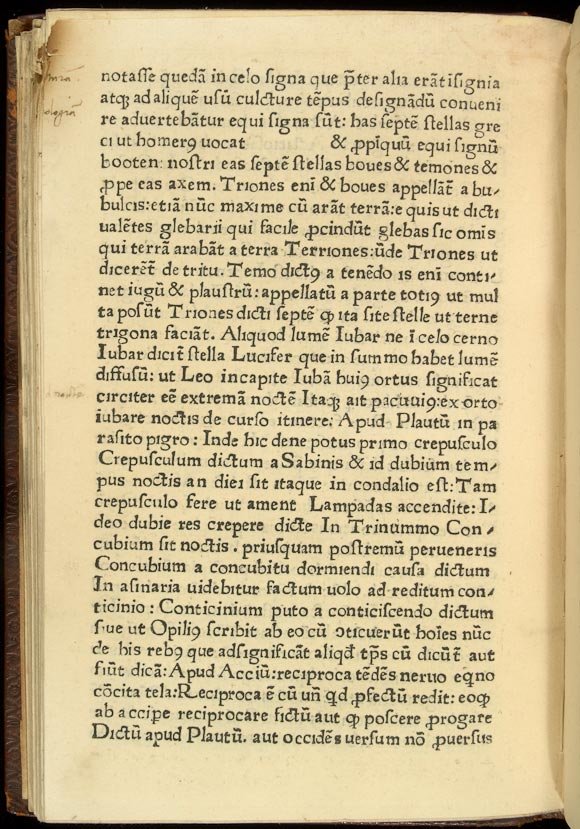 While the colophon does not include the basic information on the imprint, as a note to the reader it is an extraordinary piece of evidence about the attitude of publishers and editors when printing a classical text for the first time. The editor or publisher warns the reader (Parce qui legeris) about the fact that some parts of the text might have remained unpolished (si aliqua minus polita inueneris). Thus, Pomponius Laetus himself (Pomponius tuus) asks that whatever is still in a corrupted state, textually speaking, (quoduis corruptum erat) due to the effect of time (siue seculum fecerit) or to the shortcomings from the copy of a scribe (siue librarii Volumen) should be corrected without shame (sine rubore). 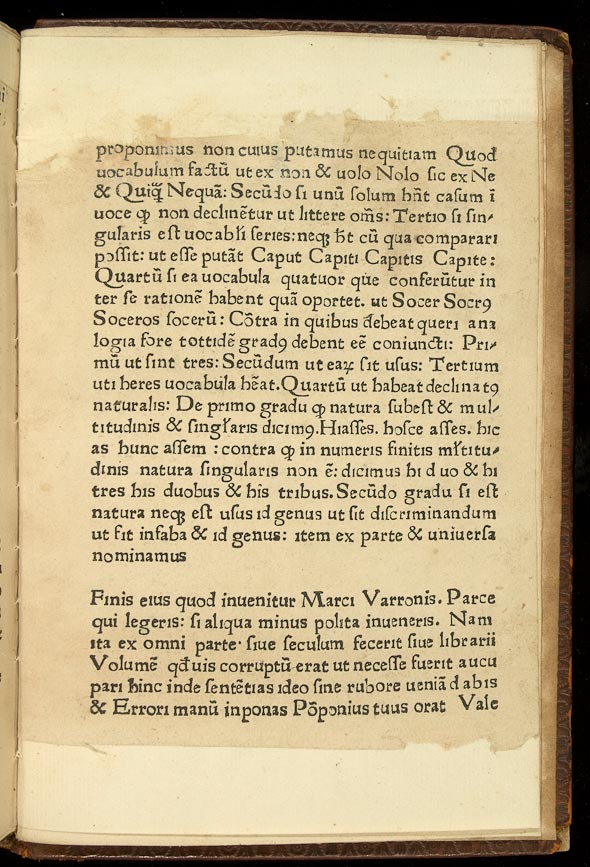