This book should be seen as part of a wider ideological trend to mythologize the West: the newly explored land is portrayed in Eden-like scenes. 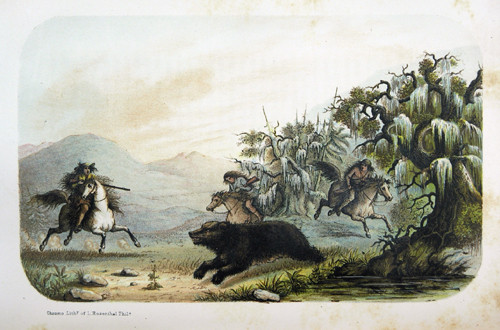 Charles Wilkins Webber (d. 1856) was a writer and adventurer born in Russellville, Kentucky. He traveled extensively south and west, spent time with John Coffee Hays and the Texas Rangers, and met John James Audubon on his last tour to the Rocky Mountains. Both his western adventures and a passion for natural history would become essential elements in his writings. In his first stories published in magazines, he echoed his past experience with the Texas Rangers. "Shot in the Eye", a short story based on Texas border life, was published in different versions in the Democratic Review and the American Review: A Whig Journal in February 1845. In 1848, he published his first book, Old Hicks, the Guide; or, Adventures in the Camanche Country in Search of a Gold Mine, New York: Harper & Brothers. This book should be seen as part of a wider ideological trend to mythologize the West: the newly explored land is portrayed in Eden-like scenes.

Spine and title page of Webber's The Hunter-Naturalist

The title featured in our "Collection Highlight" page is Webber's second major publication, The Hunter-Naturalist: Romance of Sporting, or, Wild Scenes and Wild Hunters, Philadelphia, 1851. It includes an interesting combination of outdoor adventures with digressions on natural history designed for a wide audience. These narrative asides are not scientific in the strict sense, but the result of the first-hand experience of the adventurer. In the introduction, Webber perfectly summarizes the main purpose of the book, explaining that a new method of illustration (chromolithography) will make it possible to popularize natural history:

My cherished object in this undertaking is, to introduce within the general scope of Polite Literature, a popular Natural History: upon the production of which I have so brought to bear the latest discoveries of Science, in the application of mechanical forces to pictorial illustration, as to cheapen all their cost without any deterioration of artistic value; and bring the essential spirit of what have been heretofore as sealed books, from their excessive costliness, within the reach of the People. (pag.3) 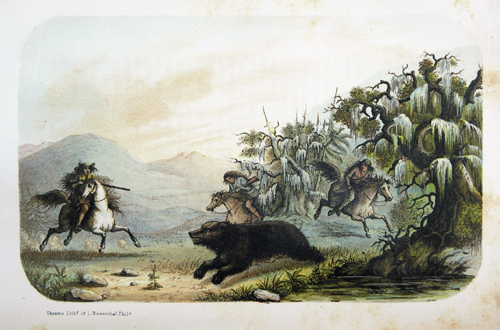 The book is profusely illustrated with ten chromolithographs and numerous small woodcuts. The standard bibliographies on American lithography are rather vague as to the number of color plates contained in it. Bennett states that it has five colored lithographs by Alfred J. Miller. Howes quotes nine color lithograph plates. Nevertheless, if we carefully examine the plates we soon realize that the information derived from them perfectly matches what the author himself says in the introduction. Webber announces that "each volume shall contain at least five such Plates as those we give in this, devoted to the illustration of the scenes of our own Indian Border Life, which will be furnished from the noble and unequalled pencil of Alfred J. Miller, of Baltimore, who accompanied Sir William Drummond Stuart on his noted expedition among the Indian Tribes of the Plains, as Artist." (pag.6) In their respective captions, these first five plates are explicitly identified as chromolithographs, one by L. Rosenthal Philadelphia (the first plate before the title page) and the other four more generally as Rosenthal Philadelphia. Rosenthal was a family company specializing in the publication of lithographs. At one point, four of the family's five brothers were partners in the firm: Morris, Louis N., Simon and Max. According to Max's son, Albert Rosenthal, "Louis Rosenthal never lithographed -- he was a publisher and printer."Max Rosenthal was the artist who actually did the drawings on the stone. However, it appears that it was Louis who received public recognition for the technical achievements: the Franklin institute awarded Louis a prize for chromolithography following the publication of The Hunter-Naturalist. As Webber enthusiastically mentions in the introduction, this is the first time that chromolithography is introduced in an American book. This illustration process requires the identification of the different colors from the original painting. An outline version of the image is then transferred to each of the stones, one for each color. The color-separator would use the lithographic techniques for drawing on each stone the relevant section of the design according to the particular color involved. This revolutionary process considerably multiplied, and cheapened, the possibilities of color reproduction in the second half of the nineteenth century. It is odd that some reference works, such as the article in the last edition of the American National Biography, mention that the plates of the Hunter-Naturalist were hand-painted by Webber's wife. This assertion would utterly contradict the philosophy behind this innovative publicizing enterprise. Moreover, one may expect that Webber would have mentioned this important aspect of his wife's participation in the project. In the introduction, the writer merely says: "and to her hand I am indebted for much of the fine work in illustration of this volume. But this is not her peculiar field -- the delicate accuracy of the Woman artist will be more prominently and characteristically displayed in our second volume, the title of which will be 'Wild Scenes and Song Birds of the World'"(pag.7). It is therefore plausible that E. M. Webber designed the color illustrations of African wildlife as well as some of the woodcuts.

The other five chromolithographs in this volume lack the identifying captions present in the previous five. We can only speculate about the reasons why the Rosenthal Company did not include their imprint on these. They are certainly of a lower quality -- we are not told the name of the painter -- and deal with a topic, African wildlife, that was not central to the plan of the announced series: 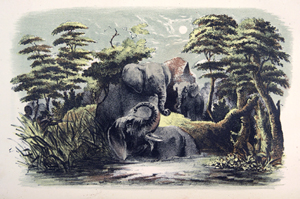 "I shall give in addition -- as in this volume -- five other Lithographs of Foreign scenes quite as elaborately drawn, but of less costly finish. And I hope so far to perfect, through the skill of my lithographer, Mr. Rosenthal, the process by which he has produced these unparalleled specimens of the art of Printing in color upon stone and at cost which will come within the limit of that of the present volume." (pag.7)

Good reviews were decisive for the commercial success of books such as The Hunter-Naturalist. In theBoston Daily Advertiser (10 Dec. 1851), Nathaniel Hawthorne enthusiastically praised the book. However, Hawthorne expressed serious reservations about the reception of the book in a private letter:

"I doubt whether the poor fellow succeeds, after all. His object is not definite enough for the public comprehension -- at any rate, he does not pursue it definitely. I fear he will find no niche to put himself into -- but I am glad that I have done this very little mite for him and his wife." (Hawthorne to E. P. Whipple, 7 Dec. 1851).

The provenance of our copy deserves to be mentioned. A hand-written receipt has been attached to the front flyleaf: "At Charles Hotel Nov 20th 1851 E. A. Stevens Esqr Recd one copy of 1 st vol Hunter Naturalist -- five dollars Recd payment. C. W. Webber.

Edwin Augustus Stevens (d. 1868) belonged to a family of inventors and entrepreneurs from Holboke, New Jersey. Along with his father John and elder brother Robert, he was involved in numerous entrepreneurships such as the initiation of the first railroad operations in New Jersey: In 1830, the New Jersey legislature granted Edwin and his brother Robert a corporate charter for the Camden and Amboy Railroad Corporation.

Although The Hunter-Naturalist was designed to be the first in a series of seven volumes dealing with American wild life and natural history, Webber only managed to publish a second volume for the announced series: Wild Scenes and Song Birds. New York: G. P. Putnam, 1854.

Duyckinck, Evert A. and George L. Duyckinck. Cyclopaedia of American Literature; embracing personal and critical notices of authors, and selections from their writings. 2 vols. From the earliest period to the present day; with portraits, autographs, and other illustrations . New York: Charles Scribner, 1855.

Gascoigne, Bamber. How to Identify Prints. A complete guide to manual and mechanical processes from woodcut to inkjet. New York: Times & Hudson, 2004.