The Neilly Author Series memoirist talks about his ‘score’ in 2020, golf at Augusta National, and his heroes. 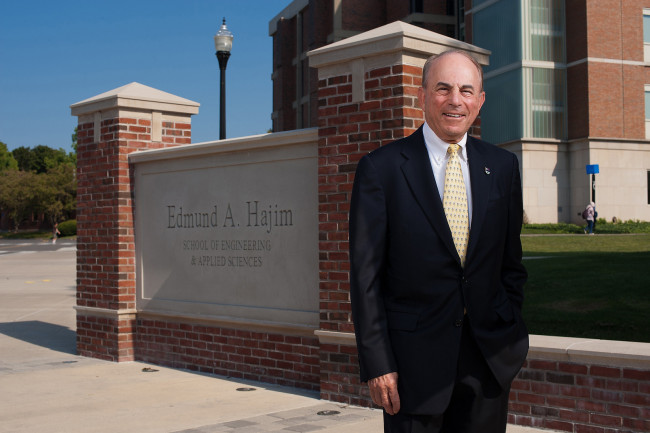 Sound familiar? That’s probably because Hajim’s service and philanthropy at Rochester have made “Hajim” a household name at the University. He served on the University Board of Trustees for almost three decades, during which he was chairman for eight years (2008–2016). He is the Edmund A. Hajim School of Engineering & Applied Sciences namesake, an honor he earned in 2008 when he made a $30 million commitment to the University. (This is just the tip of the gift-berg. Hajim and his wife, Barbara, have provided more than 200 scholarships to Rochester students and, at the libraries, support for the Barbara J. Burger iZone, the River Campus Libraries innovation program and space.) He is also the namesake of the Hajim School’s quadrangle, where you can find his statue. And he’s won numerous University awards, including the Eastman Medal (2016), the Arts, Sciences & Engineering Dean’s Medal (2013), and the Simon Business School’s David T. Kearns Medal of Distinction (2009), among others.

In 2015, Hajim was recognized at the national level by the Horatio Alger Association of Distinguished Americans in part for his “remarkable achievements in the face of adversity.” To say Hajim has faced “adversity” is saying the least. If you don’t know his personal story, you can now read it because Hajim has put it to paper in his memoir, On the Road Less Traveled: An Unlikely Journey from the Orphanage to the Boardroom.

Hajim’s journey starts at age three when he was kidnapped by his father, who told Ed that his mother was dead and drove him across the country. And as the book’s title suggests, things only got worse.

Abandoned and on his own, Hajim spent much of his youth learning lessons in self-preservation and self-reliance. The story details his service in the U.S. Navy, college education, and climb up the corporate world’s ladder. There’s even the discovery of a long-kept family secret.

On March 11, Hajim will bring his story to Rochester’s virtual campus as the River Campus Libraries’ Neilly Author Series Lecturer. Before joining us on Zoom, he faced the customary three “serious” questions.

It wasn’t easy, but we made it to 2021. In your book, you mention liking to take stock of the previous year—what you accomplished and what you didn’t—and look ahead. Knowing you don’t “keep score” and adjusting for the pandemic, how did you do, and what’s the plan for this year?

The biggest thing I accomplished was my book, a project which took nearly seven years. The pandemic and not having to travel gave me a great deal more free time to work on it. I also got a lot more reading time. I read books—mostly historical fiction, [Leon] Uris and [Ken] Follett—that have been piling up for years.

Something I did not do is spend enough time with some of my business activities. Not being able to “go to the office” made it much more difficult to help and kept me from getting quality time with key people. I also didn’t get to see my children and grandchildren as much as I would have liked. This year will be the “Year of the Book,” and I’ll have to think about whether I go ahead with two other manuscripts I have produced. I need to decide if my effort will really help readers better navigate the journey of life or if this is something I’m doing to satisfy myself. I also need to think about being more of a public figure and if that is something I want and can handle since it has never been something I have pursued in my life. To live happy is to live hidden.

We’re only a couple of months away from the golf season’s first and most beloved major championship, The Masters. If you were invited to play a pre-tournament round, at Augusta, with any three people, whose completing your foursome?

I have already played Augusta once. I played two rounds. During the first round, I was so excited I could hardly play. It was beautiful. I have memories from almost every hole. Even with caddies, the greens were impossible. The next day I settled down and shot a 91; I even made par on the famous 16th hole. What I remember most was the absolute beauty of the course. Also, how it was not as difficult as I thought—except for the greens, and we obviously did not play from the pro’s tees.

If I could play again with anyone, I would choose Tiger Woods, Jack Nicklaus, and Gary Player because I think they’re the greatest golfers of all time. I might even substitute Arnold Palmer for Nicklaus. I would ride with Player or Palmer since they seem easy-going. For the second round, I might invite Phil Mickelson so I could play with another lefty.

My first heroes were those on the silver screen. Between the ages of five and ten years old, the highlight of the week was a trip to the movies. I saw two for 25 cents. In the westerns and war movies, the good guys always did the right thing and normally survived. That resonated with me. But throughout my life I collected the good parts of people who I admired, like the generosity and concern of “the boss” at my last orphanage. There was also Oscar Minor a [mechanical engineering] Rochester professor, who took me under his wing and helped me both academically and with my extracurricular activities; a naval commander, who taught me the rules, their importance, and why they had to be followed to the letter; a [Harvard Business School] professor who introduced me to the excitement of putting together a strategy; the many business associates whose input I could not do without. And then there’s the person who has been there all along—my wife, Barbara. Without her partnership and love I would not be where I am today. ∎

For more information on Ed Hajim’s lecture, send your questions to SpecialEvents@rochester.edu. Enjoy reading about the University of Rochester Libraries? Subscribe to Tower Talk.