University Libraries has given its search function more robust software and a new identity. 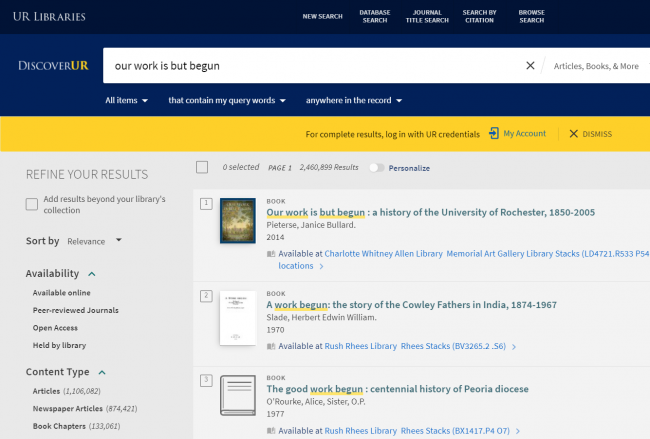 A month ago, if you asked the University of Rochester community to name the libraries’ search and discovery function, you would have been asking a trick question. There wasn’t one. However, you still would have gotten answers.

Some would have said “The catalog,” which is a type of search. Searching the catalog would produce physical and digital materials owned by the libraries. For instance, what you might find in the Rush Rhees Library stacks.

Others may have said “Articles, Books, and More,” which is another, broader search-type that includes the catalog and remotely accessed materials.

Another answer, and perhaps the least likely—since it would have come primarily from staff—would have been “Summon.” Summon is the name of the software that supported the search and discovery function—that’s past tense because, on July 12, the University Libraries upgraded to “Primo VE.”

The upgrade to Primo provided the libraries with an opportunity to solve the ambiguity around its discovery layer’s identity. It needed a name that would represent all of the search components, be easy for librarians to reference when helping patrons, and invite patrons to explore the depth of Rochester’s materials. That name is DiscoverUR.

Normally, this would be a perfect mic drop moment. But we want to provide some context for those curious about the move to Primo. And we’re going to do that in a section called…

WARNING (A request): Bear with us; this requires travel through the tall grass from time to time.

When the libraries migrated to its current management system, Alma, there was a question of what to do with Summon, the discovery software you met earlier. The libraries decided to stick with it. The logic was rooted in the desire not to overburden staff and patrons with two moves at once. Despite the non-move, Summon’s days were now numbered.

Summon wasn’t built to work with Alma. The two systems are effectively silos. That disconnect had a direct impact on the user experience, which included failed searches and saving and exporting search results.

According to Stephen O’Connor, senior information analyst at the River Campus Libraries, issues with Summon were present from the start.

“There were things that we wanted it to do that it couldn’t do,” O’Connor says. “They weren’t huge things. They were pain points, inconveniences, like clicking four times to get what you want. However, if you experience enough ‘small’ issues, it gets to be very frustrating. Our issue was we couldn’t fix these problems because of how Summon interacted with Alma.  It reached a critical mass. We felt sure we could do better and serve our community better.”

In January, the libraries began comparing Summon with Primo, a more robust platform and a natural pair for Alma. Primo ended up being the runaway choice.

“We didn’t consider any other product,” O’Connor says. “We chose Primo because it is better for our users and it was built by our vendor specifically to work with Alma. It’s better for librarians, too, but really, it’s better for the users.”

The changeover was subtle. Users may not even notice the difference, but there are differences. Here are a few of the big ones:

Although Primo is currently live, it’s still in the implementation phase. That means staff may already be working on any pain points you’re experiencing. If you have feedback or incur any issues, send an email to DiscoveryFeedback@library.rochester.edu. ∎

If you have general questions about the Primo project, contact Melissa Wisner, director of Digital Strategies, at mwisner@library.rochester.edu.