On a hot summer day, nothing beats a taking a refreshing—and illuminating—dip into the University Archives. 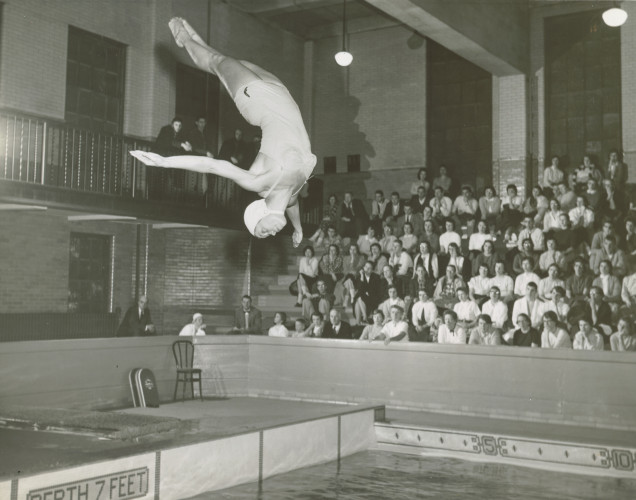 With the University of Rochester in between semesters, you may be tempted to think the libraries have powered down for the summer. Far from it, friend.

Just last week, the River Campus Libraries held a virtual Q&A for new open education grants. The week before that, we held the last installment of the six-part ExhiBit series for the digital exhibit We Want More and We Will Have It: Women Running Rochester. And looking ahead, this Thursday, we are further exploring another digital exhibit with “‘Not Dead Yet’: Lively Ladies and Elaine after Tennyson.”

Another summer highlight took place from June 7 to June 11, a week known to the world as International Archives Week. We didn’t hold a public event for this. It was just us, swimming through the University’s historical records, like Scrooge McDuck in his money bin.

We cannonballed into volumes of the Campus Times and issues of Rochester Review.

We backstroked over student dissertations and theses.

We did the breaststroke across public relations files and registrar records.

We butterflied past Faculty Senate minutes and papers of the University’s past presidents.

All of our splashing around was figurative, of course, but all of these materials—and many more—can be found within the University Archives. The archives serves as Rochester’s institutional memory, preserving materials of enduring value—and it’s a deep, deep pool. Because it’s a veritable ocean of information, Melissa Mead, the John M. and Barbara Keil University Archivist and Rochester Collections Librarian, is commonly regarded as a magician for her ability to produce relics and other Rochester history at will. But it’s not magic (we’re 99 percent certain); it’s just good archiving.

“The reason I’m able to ‘pull something out of a hat’ is that my predecessors collected it and filed it,” Mead says. “Trying to keep those files up to date is actually one of the huge pressures of this job.”

Some of the methods are time-honored and effective—pulling a flyer for an event (that has already occurred) off a wall—others are more involved, like the Archiving Our COVID-19 Stories project.

Mead also spends time thinking about her successor. “I know there are things I can’t finish, but I need to leave the archives ready for the next person, as it was left for me.”

For those currently gripped by panic, you can relax. Mead is not hinting at retirement. She is only acknowledging the importance of being a good steward of Rochester’s story. To further put you at ease, you can hear Mead explore objects from the University Archives—such as Rush Rhees’s umbrella and oversized mascot heads—and the personal collection of Mark Zaid ʼ89, a member of the River Campus Libraries National Council on July 15.

Since we still have access to Mead’s knowledge and all the sorcery she denies, we asked her to share a piece of Rochester worthy of International Archives Week. She gave us the African Students Center records.

International students have been attending the University almost since it was founded in 1850. In 1964, the University began participating in a State Department program for young political refugees from Africa. The students’ educational levels ranged from the last two years of high school to the college-graduate level. They came from 13 countries, including Angola, Malawi, Mozambique, Somalia, Swaziland, Tanzania, and Zambia. After initial evaluation and preparatory coursework, students were matched and enrolled at colleges and universities around the United States. The University of Rochester served as one of two initial orientation locations (the other was at Lincoln University).

Why Rochester? According to a Campus Times article (October 11, 1966), Rochester was chosen primarily due to the encouragement and influence of former President Cornelis de Kiewiet, who was working with the State Department. De Kiewiet, who was raised in South Africa, wrote and advocated against apartheid throughout his life.

At Rochester, the African Student Center also had a physical location with offices and meeting rooms in the Men’s Dining Center, now the Frederick Douglass Commons. Students lived in dormitories or with Rochester host families and remained in the orientation program anywhere from a few months to a full year. Some students ended up enrolling at Rochester as full-time students.

Centers were closed by the State Department at the end of September 1967. The assumption had been that the students would return to their home countries after obtaining degrees. However, many remained to continue their studies, so the “pipeline” of new students who would be assigned to Rochester’s African Student Center was ended. A total of 152 students went through the program. —MM ∎

Photo caption: U.S. National springboard champion Anne Ross (1940–1944) gives a diving demonstration in the alumni gymnasium pool. She was assistant professor of physical education for women (1957–59) and served as faculty advisor to the synchronized swimming group, the Doll-fins. Learn more.

The African Students Center papers were processed by Emma Morgan ʼ16. If you have questions about the University Archives, you can send them directly to archivist Melissa Mead at melissa.mead@rochester.edu. Enjoy reading about the University of Rochester Libraries? Subscribe to Tower Talk