When New York State approved research libraries to open, iZone got the call 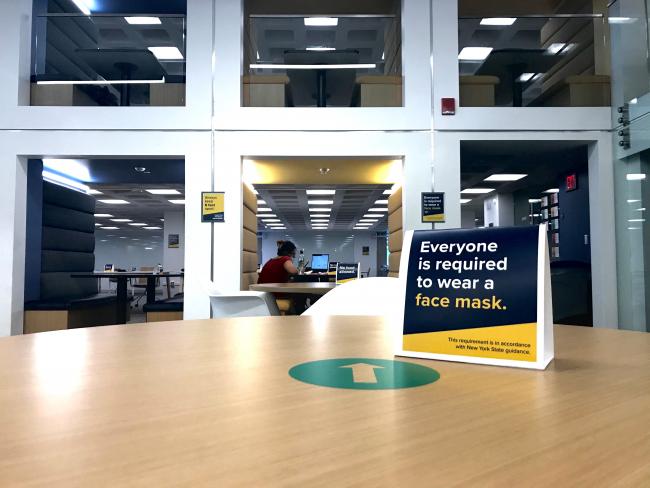 It feels impossible, but it was only a little more than four months ago that the River Campus Libraries (RCL) had to close all of its physical locations. Although the libraries never stopped serving students and faculty, there’s no replacing the experience of being in Evans Lam Square, the Carlson Science and Engineering Library, or any of its other spaces. So, when an opportunity to reopen in June unexpectedly knocked on the libraries’ door, no effort was spared to answer.

A special exemption in Phase Two of New York State’s reopening plan presented the RCL with a green light to bring its spaces back to life. However, doing this across the board, following state, county, and University safety guidelines, was impossible. There was only one space that staff could prepare quickly and adequately for student use: the Barbara J. Burger iZone.

iZone reopened as a study-only space for students on June 29. It became one of the first of any University spaces to reopen in Phase Two.

“We’re not just a test site for the libraries,” says Emily Clasper, director of Service Strategies and a member of the team assembled to reopen iZone. “We’re a test site for all River Campus. And the collaboration we’ve seen is going to have an impact on the University’s restart beyond the libraries."

iZone made the best “test case” because its size and controlled access provided the right mix of conditions to accommodate the largest number of students safely. That is not to say that reopening iZone was as simple as unlocking the doors and switching on the lights.

Getting iZone in pandemic-shape required the solving of many logistical issues. For example, there was the puzzle of the physical space. Seating needed to comply with an occupancy guideline of 50-square-feet per person, plus six feet of separation. This is why there’s only one chair per table in the piazza and why the tabletops have green stickers that point to where students should sit (and where the chair should be). Other seating restrictions are in place for booth-seating and project rooms to ensure adherence to physical distancing guidelines.

Cleaning was another carefully considered issue. One of the first things a student sees upon entering is a sanitation station, equipped with hand-sanitizer and disinfecting wipes.

“I think one of the most challenging pieces I was involved with was staffing the space,” says Clasper “We used an all-volunteer [RCL] staff, so I wanted to make sure they felt comfortable, especially since some of them had had questions about their safety. But once someone staffed a shift, they felt a lot better.”

One of the ways Clasper helped ease the staff’s concerns was a three-part training program that included a one-hour Zoom session on basic staffing information, a series of short procedural videos, and another Zoom session to answer questions.

In general, it’s not the iZone anyone is used to. Typically, it’s a place that’s pulsing with the energy. Its natural state is organized-chaos created by students working side-by-side on individual assignments or collaborative projects. Now, everything about the space says, “Keep your distance,” sometimes almost literally. Signs are placed on tables and posted on walls throughout iZone to remind students of rules and guidelines.

Everyone is required to wear a mask.

“It generally feels much different,” says Bosic. “There are very few people, and everyone is spread around, so it’s very quiet. But I am grateful to have a study space open.”

Matt Reffold ʼ20 has been in iZone every day for the last two weeks because of a summer course in psychology.

“It’s been unbelievably helpful to get out of the house,” says Reffold, who shares housing with others. When the fall semester begins, he’ll be taking his classes remotely. Still, he sees himself visiting iZone and other library spaces throughout the semester.

“All things considered, it’s been pretty good,” says Reffold of iZone’s current conditions. “This is more normal than anything that’s happened so far.” ∎

For more information on iZone’s reopening process or to hear more on what it’s been like being open, contact Emily Clasper at emily.clasper@rochester.edu. Enjoy reading about the University of Rochester Libraries? Subscribe to Tower Talk.