May is for manuscripts 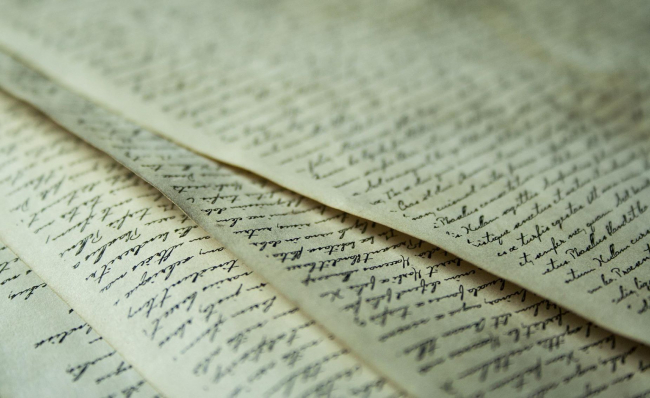 Every month of the year has been claimed as the month to celebrate, recognize, prevent, or raise awareness for a surprisingly long list of things.

Some monthly observances are more official than others. For example, National [Anything] Month signifies the backing of a Congressional resolution. Outside of that, anyone can claim a month to recognize a cause they’re passionate about. Henceforth, at the University of Rochester, the libraries will recognize May as “Manuscript Appreciation Month,” as decreed by this article.

The mention of “manuscript” may evoke an image of a hefty leather-bound tome from the Middle Ages, whose parchment pages are adorned by beautiful penwork and even more beautiful illustrations. However, that’s not even how most medieval manuscripts looked. A manuscript is simply anything written by hand.

So, when considering what makes a manuscript valuable, you must also consider who is reading it and why.

“Manuscripts—from any period, written on stone, leather, or paper, in the form of a letter, treatise, or receipt—represent our pasts and inform our futures,” says Miranda Mims, the Joseph N. Lambert and Harold B. Schleifer Director of Rare Books, Special Collections, and Preservation. “For this reason, our collection development process is intentional, careful, and done with the understanding that our respective curatorial practices intend to elevate scholarship, inspire intrigue, and offer revelation while preserving a shared cultural heritage.”

For our inaugural celebration of the handwritten word, we’ve asked Anna Siebach-Larsen, director of the Rossell Hope Robbins Library and Koller-Collins Center for English Studies, and Meredith Gozo, curator of rare books and manuscripts for Edward G. Miner Libraries, to share examples from their collections.

Note: Although we made a point to explain that manuscripts are more than ancient books and exist in every century, including the 21st, we cannot help that the very old examples tend to be very interesting. Enjoy.

Nun-sense of the highest order 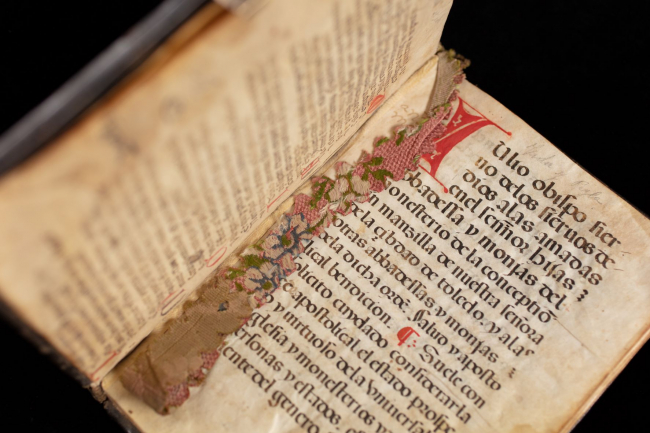 In 1484, Beatriz de Silva, a Portuguese noblewoman, had a vision of the Virgin Mary that so moved her that she vowed to remain a virgin and form a community of nuns. After entering a monastery in Toledo, Spain, she developed the practices of the Order of the Immaculate Conception, better known as the Conceptionist Order of Nuns. Twenty-seven years and several established convents later, Pope Julius II approved the Conceptionist Rule—the blessing of blessings for their discipline and plan for life.

The Conceptionist Rule is quite literal in that it has actual rules, which can be read in a manuscript recently acquired by Robbins Library. Given that the Holy See’s approval came in 1511, the “rule book” was likely produced soon after, making it one of the Rule’s earliest manuscripts and extremely rare.

Still in its original binding and equipped with a clasp (to keep the parchment pages, which tend to warp, flat), the paperback-sized book tells a Conceptionist all she needs to know about being a Conceptionist. The Rule’s rules include what clothes should be worn (blue cloak over a white tunic complemented by a scapular and wimple), when to go to bed, pray, and talk (very seldom), and what furniture can be owned (not much).

This manuscript might seem like a random, niche purchase for Robbins, but it checked a lot of boxes for Siebach-Larsen. First, it further develops the library’s collection of medieval and early modern manuscripts owned by women—this one presumably by Doña María Antonía Miranda, whose name is written on several pages. Second, it’s a Spanish translation of the Rule. Manuscripts from this period tend to be written in Latin, which is a barrier to engagement for a lot of students. This accessibility point leads to another benefit.

“Perhaps most importantly, this manuscript offers fantastic opportunities for teaching and research,” says Siebach-Larsen, noting there are graduate students and faculty members that can immediately use this for current projects. “One of the great strengths in our history department is early modern transatlantic history, and the Conceptionist Order of Nuns were an important religious group in New Spain.”

Siebach-Larsen says she hopes to organize a concert associated with the Conceptionists to highlight the manuscript and connect it to the University research, like the work done on this order of nuns by Pablo Sierra Silva, associate professor of history, and Andrew Cashner, assistant professor of music.

The representation of women in Robbins’ collection is just one of the things Siebach-Larsen is thinking about as she considers new acquisitions. “I think about gaps,” she says. “Do we have manuscripts from particular areas of the world, from particular cultures, from certain time periods? I’m also always looking for examples of different kinds of handwriting.

“And I think really carefully about research, which ties into teaching, and leads back to language. Latin is a real language barrier, so I’m looking for things in Spanish and French. We have a great collection of German manuscripts. Middle English is very, very hard to find and very expensive. Overall, I’m essentially looking to create a balance of breadth and depth.” 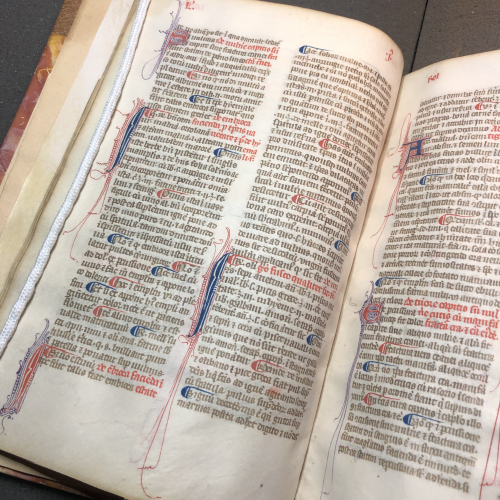 A mononym is usually an indicator that someone is operating at a higher level (e.g., Socrates, Michelangelo, Prince, Cher). In 12th-century Salerno, Italy, there was one such person, a surgeon and teacher, Rogerius—even though he was also went by Roger Frugardi, Rogerius Salernitanus, and several other names.

Why would a modern medical center’s library want a surgical text that is more than 500 years old?

From the manuscript, students embark on a journey through the atlases, which provide an outstanding textual and visual timeline of what was known about the body and when.

Gozo’s lessons often underscore how fortunate today’s students are to have accurate, detailed visual representations of the human body. In the times of Rogerius and Roland, there were few opportunities for medical students to see human anatomy firsthand—dissections were few and far between, making the primary exposure to the body’s interior accident and injuries that provided literal openings.

All medical manuscripts are significant because they are records of what was known at a given time. They are physical representations of the effort to record and preserve knowledge throughout history.

“You don’t need to be an expert to appreciate the manuscripts in our collection,” says Gozo. “Whether it’s is a beautiful, illuminated work on parchment or a common domestic receipt book, it is easily understood as a work of labor, something someone found important enough to document.

“To me, when I’m looking at a manuscript, there’s an inescapable feeling of intimacy. The fact that the original scribe or writer put a quill or pen to a page brings a real sense of humanity to the act of its creation.” ∎