One scholar’s universe is another scholar’s treasure

Students and the faculty are marveling at a 15th-century manuscript on the cosmos. And it's not just because it's close to 600 years old. 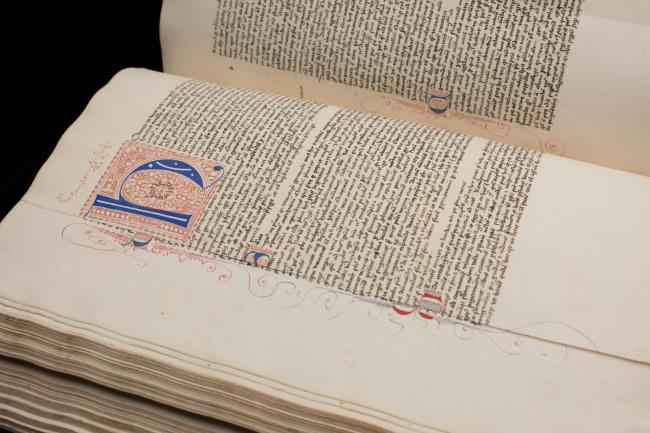 Late in 1227, Notre Dame Cathedral chapter canons assembled to name the successor of a recently deceased bishop of Paris. After contesting the first two selections, canon William of Auvergne took his dissatisfaction to Pope Gregory IX. William, a prominent theology professor at the University of Paris, made such a strong impression that the Pope made him bishop. Given that he talked himself into being bishop of Paris, it's perhaps not very surprising William would then produce an enormously influential treatise on the corporeal and spiritual universe.

William’s 600-page manuscript, De universo (On the Universe), marries science and the humanities in an exploration of the universe’s creation and structure, the elements of nature, and the essence of God, angels, and demons. Written sometime in the 1230s, the manuscript was referenced by scientists, philosophers, theologians, and artists across Europe, well into the 17th century. A rare copy of the manuscript now belongs to the University or Rochester, thanks in part to a generous grant from the B. H. Breslauer Foundation.

While some may marvel at the rarity of the text or the unique illustrations, Anna Siebach-Larsen, director of the Rossell Hope Robbins Library and Koller-Collins Center for English Studies, is excited about the inclusion of astronomy and astrology.

“I see this manuscript as an important first step in building a vibrant and exciting collection in medieval and early modern science,” Siebach-Larsen says. “It’s an extraordinary look at the culture of scientific thought and the ways in which it was transmitted, and in that sense, it’s perfect for the University of Rochester. There aren’t too many other universities that have a library dedicated to the Middle Ages that also have top-notch science and engineering programs.”

Take a look inside the manuscript with Anna Siebach-Larsen.

Previously owned by Filippo Barbarigo, a 15th-century Italian nobleman and close friend of the pope, the Rochester's copy of De universo, held in the Department of Rare Books, Special Collections and Preservation, is the only one held at a U.S. institution. Barbarigo’s copy of the text includes extraordinary and unusual illustrations of heaven and earth. There are also numerous corrections and annotations throughout, which demonstrate the how a 15th-century reader studied the text.

Laura Smoller, chair of the Department of History says friends and colleagues at other institutions are envious of the University’s commitment to acquiring materials like De universo.

“This manuscript is a dream,” Smoller says. “William of Auvergne is so important to the history of astrology and astronomy in the Middle Ages, a major area of my research and teaching. Manuscripts offer important evidence of how readers encountered important texts.”

Smoller is eager to have her students interact with the text in her course Science, Magic, and the Occult from Antiquity to Newton because it’s experiences like that in which “the past suddenly becomes real.”

Kyle Huskin, a graduate student in the Department of English, shares Smoller’s excitement.

“I was immediately struck by the astonishing opening illumination of the spheres of the universe. I cannot wait to explore its pages in greater detail,” Huskin says.

The manuscript gives faculty and students a doorway into numerous areas of study, from the concepts and ideas it presents on the universe’s architecture to the art, or even microbes, on its physical pages.

Huskin noted she was looking forward to examining the text in her Paleography Working Group sessions, as the script is “a perfect example of late gothic writing” and its content is “just plain awesome.” ∎