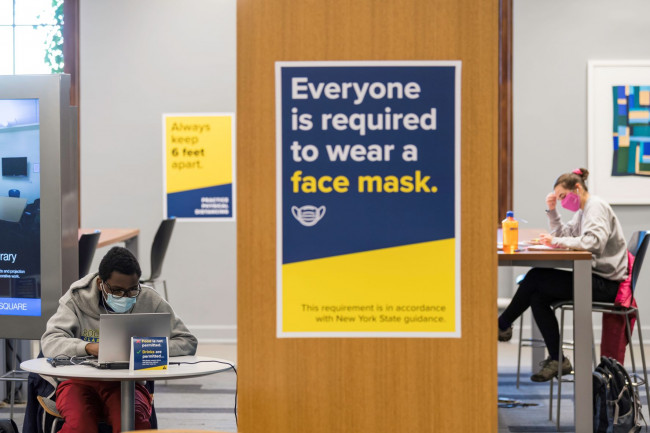 Around this time last year, the University of Rochester was still trying to re-discover its in-person legs after months of campuses being closed due to the then-new global villain COVID-19. Even though students, faculty, and staff were back together again, it was at a distance no closer than six feet while wearing face-coverings.

It was (and still is) a weird time.

The surreal face-masking and distance-keeping were policies that Rochester put into place—following guidance from the CDC—for the sole purpose of keeping the University community healthy. Pre-vaccines, these were our best defenses. And yet, they only reduced risk. That’s why for some, the return to campus was an exercise in stress and anxiety management. On top of the inherent risk that accompanied being around other people (indoors), there was the chance that those people may forget about or outright disregard said policies.

At the River Campus Libraries, the responsibility of ensuring its patrons felt safe in its spaces—meaning people were wearing masks and practicing physical distancing—fell to the staff leadership team (managers) and about a dozen student employees, especially during evenings and on weekends.

“I thought that was a pretty sobering responsibility,” says Amy Marple, section supervisor for Patron Services, who oversees the student workers. “They all rose to the occasion, but they also felt a little overwhelmed and a little isolated in the task.”

‘Have you ever dealt with an unreasonable customer?’

Faster than anyone should have been able to do anything during the height of the pandemic, Marple led the development of the position, including its design and the interviewing, hiring, and training of students to serve in the new role. The role was pretty straightforward. Ambassadors monitored open Rush Rhees Library spaces to ensure patrons were complying with active COVID-19 policies and to provide any related assistance.

Her feat of agility under duress is one of the reasons she received an Outstanding Support Staff Award from the Academic & Special Libraries Section of the New York Library Association.

“It’s nice to be recognized,” says Marple. “But we all know who really did the hard work. It was the students. Compared to what they did, my job wasn’t all that hard.”

Untrue. That’s humility talking. Clasper told the awarding board as much when she nominated Marple.

In the nomination, which received unanimous praise, Clasper lauds Marple’s performance despite “incredible obstacles.” She highlights that the creation of the student ambassador position was done in parallel with everything else Marple was doing, such as leading full-time staff and re-training existing student employees who had to take on new responsibilities due to COVID-19.

“To say that keeping an operation of this scale running was a challenge is a complete understatement,” writes Clasper. “At a time when keeping the lights on would have been a feat in and of itself, Amy was miraculously able to keep us moving toward our long-term goals. She took each challenge as it came, providing creative solutions to daunting problems, supporting staff and student workers alike, and never sacrificing the level of service provided to the University community.”

During the past summer, Rochester required that all students—undergraduate and graduate—who planned to be on any University campus be vaccinated against COVID-19 by August 1. This measure, coupled with the end of physical distancing, greatly reduced the need to have students continually walking through library spaces. As a result, the River Campus Libraries discontinued the use of student ambassadors at the end of the fall 2020 semester.

Although Rochester only used ambassadors for two semesters, it was long enough to put it in “bad” company. Last month, The Federalist published a story that castigates universities for using student ambassadors as part of their pandemic safety efforts. Rochester is among the listed “offenders.”

“I guess, to me, a snitch suggests that we were telling somebody,” says Marple, “and giving out the names of people who were not cooperating. That wasn’t the case.”

Let’s say someone in Rush Rhees Library’s Great Hall wasn’t wearing a mask. The process ambassadors were expected to follow was to give that person two reminders. If that person was not following the rules that were very clearly communicated through extensive signage—not to mention the ambassador—they were asked to leave. “It really just boiled down to reminders,” says Marple.

The Federalist piece also suggests that student ambassadors, having a “misguided sense of superiority,” are reveling in their work. That falls flat on Tanasia Gordon ʼ22.

“It was extremely stressful,” says Gordon of her experience, which often put her on the receiving end of her peers’ grievances. “I understood the frustration. I was frustrated. But there were posters everywhere—on the walls, on the tables. There were emails about it. It’s like, don’t take it out on me. I didn’t make the rules.” She didn’t. The University did. In fact, there was, and still is, a University website dedicated to “the rules” (COVID-19 policies and resources).

The job wasn’t a total blast for Lauren Novosat ʼ23 either.

“Some people just didn’t understand we were just doing our job,” says Novosat. “It was very hard. But for the most part, people were pretty respectful. It was generally a ‘restoring my faith in people’ experience.”

For both Novosat and Gordon, Marple was a balm for all their prickly experiences. “She was a fantastic person to work for,” says Novosat. “Anytime any of us had a problem and sent her an email or a text, there was an immediate response.”

Gordon left the position after serving for about a semester and a half due to a particularly rocky interaction. If it wasn’t for Marple, she says she probably would have left sooner. “Every time something happened, I knew my voice would be heard,” she says. “She’s an amazing boss and person. I’m so happy she got this award.” ∎