After 50 years, the Physics-Optics-Astronomy (POA) Library is getting a complete refresh. 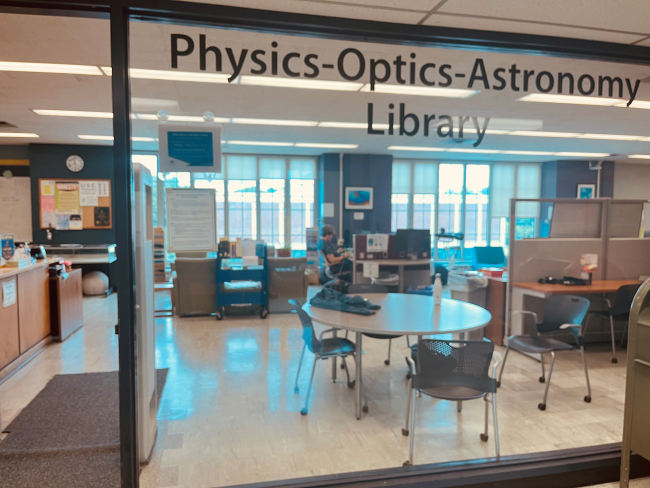 The first images from NASA’s James Webb Space Telescope (JWST) offer a clearer view of how small and young we are. It’s mind-blowing. To borrow the sentiments of Dr. Jimes Tooper (Eric Wareheim on Tim and Eric Awesome Show, Great Job!), it generates butterflies in the stomach, which tickle the spine and create goose pimples that penetrate the mind, and then, PWWOOOO!

The University of Rochester is particularly qualified to comment on this humbling moment for humanity. More than 40 optics faculty and alumni from the University have contributed to the JWST project. In recent years, dozens were involved in a series of optical, thermal, and functional tests of the telescope’s key elements. Among the alumni with JWST experience are:

These particular alumni represent the last four decades (roughly) of optics graduates. While at Rochester, they likely spent some time in the Physics-Optics-Astronomy (POA) Library. Today, if Duncan Moore and Garrett West described how they remember POA, it wouldn’t be a surprise if they provided near identical portraits. That’s because, since its establishment in 1972, POA has remained mostly unchanged.

In its 50th year, POA is gearing up for a wall-to-wall refresh, set in motion by a generous gift from University Libraries National Council member Jim Mayer ʼ82.

POA is located on the third floor of Bausch & Lomb Hall, which may be news to a lot of people in the University community—alumni included.

“I didn’t know what it was,” says Mayer on POA, regarding an email conversation about how he could help the libraries. (Last year, Mayer was among those who contributed to a giving challenge for Studio X.) So, he did what most would do in that situation. He Googled it. “It popped up, and I thought, ‘My gosh. I’ve been associated with the University for more than 61 years, and I didn’t know it was here.’”

Mayer isn’t alone. Not even close. For the last five decades, the library has operated in relative obscurity for two reasons: It’s the only River Campus Libraries (RCL) space that lives in a non-RCL building, and it exists primarily to support students and faculty from the Department of Physics and Astronomy and the Institute of Optics.

But don’t mistake POA as some misfit library among the RCL family. The library’s “hidden” status has given it the space to cultivate a unique personality and tight-knit community, with the former undoubtedly feeding the latter.

“POA users are a collection of highly energetic, whip-smart, funny, creative individuals who, by necessity and choice, collaborate daily,” says Jeffery Jones, section supervisor for POA. “And because this is Rochester, you’re as likely to hear conversations about art, music, politics, or whether vampires are composed of dark matter as you are to hear about the collapse of the wave function. It’s an easy community to love.”

For anyone who hasn’t been in POA, it’s easily the RCL’s quirkiest space. Pops of character appear throughout the library in the form of traditional and 3D puzzles in various states of completion, a corkboard of “POA Reflections” with random patron offerings, like physics pick-up lines and a collage of cats, and a plush toy of Stitch from Lilo and Stitch sitting on a string of atoms hanging from the ceiling.

POA’s distinctive features are also among the most modern aspects of the library, as much of it remains a reflection of the 1970s. However, bits and pieces have been updated over the years. The gradual changes and obtaining “new” furniture—like long study tables and a desk bike—from other RCL libraries have made the library a veritable archaeological site.

The visible age and eclectic décor made it easy for Mayer to throw his support behind the refresh. “It’s overdue,” he says. “I thought if I stepped forward, I could nudge action to be taken for a resource that’s vitally important for a community of students and faculty.

Consider what we’ve seen from the [JWST]. We have those images because of people like the students using this library and the professors down the hall. So, this project was a no-brainer. And I thought, ‘If I make a gift, maybe we can get others to make a gift.’”

The desire to revitalize POA began percolating in 2015 when patrons requested a true quiet study space. A plan to create a dedicated quiet study room began to take shape but was tabled. In 2016, POA enacted stop-gap plans to address the most pressing patron issues until a permanent solution could be agreed on.

With all that in the past and the refresh getting a “go for launch,” Jones and POA librarian Ben Mitchell are deep in a data collection phase.

Since February, Jones and Mitchell have been conducting surveys, holding focus groups, and doing charrettes to uncover the needs and wants of their users. “Also, during finals week,” adds Mitchell, “I sat down for a few hours at different times of the day to see how people were using the space.”

The results of some of the charrette exercises are worth looking at because they show what students care about while continuing to paint a portrait of the POA community. Students were given the prompts in bold; below are (some of) their responses.

Jones and Mitchell will add to this feedback through two more focus groups with graduate students. In these sessions, the POA team will seek to understand why they don’t see grad students that often and how the refresh could change that. And in the fall, they’ll hold focus groups with undergraduates.

All of these efforts are building toward delivering a new POA in September 2023.

“Anytime you get a chance to reimagine a space is exciting,” says Jones, “but POA is so much about community and collaboration. We’re working hard to protect that spirit as we go.”

Still, it needs to be functional, which hasn’t been forgotten. Months of observation have yielded an even deeper appreciation for the students.

“It’s not like any place I’ve worked before,” says Mitchell. “There were times when 10 to 20 students were here all day, every day, and the only times they’re away from the library were to go to class and eat. So, what I’m most excited about is building a space that’s as great as this community.” ∎