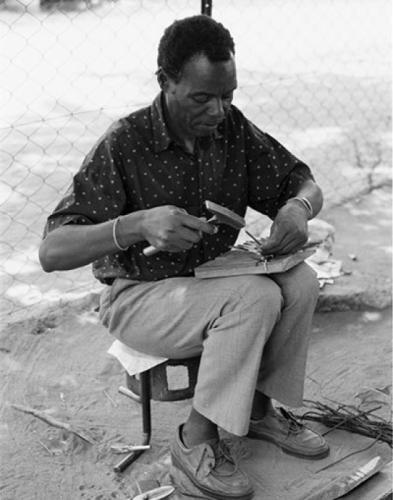 One of the newest projects out of the Digital Scholarship Lab is Sekuru’s Stories: a digital humanities project being drafted publicly by Professor Jennifer Kyker featuring the renowned Zimbabwean mbira player, oral historian, and ritual specialist Sekuru Tute Chigamba.

Born in 1939 in the rural district of Guruve, Chigamba, Tute Chigamba is now referred to by family, friends, and students alike using the honorific title Sekuru, meaning “Grandfather.” Professor Kyker, Associate Professor of Music in the College of Arts, Sciences and Engineering (AS&E), and Associate Professor of Ethnomusicology at the Eastman School of Music, began studying mbira with Sekuru Chigamba in 1995. Bringing Sekuru Chigamba’s oral narratives, or nhoroondo, together with musical transcriptions, recordings, photographs, and maps, the project represents an opportunity to use digital tools to present Zimbabwean musical and cultural heritage through the lens of one man in an interactive, accessible format.

As a digital project, Sekuru’s Stories reflects oral narrative in a way a traditional monograph cannot: it offers several non-linear paths through the stories, inviting readers to engage with a range of media: images, sounds, and an interactive map as well as the text in both the Shona language and in English. Digital tools allow this kind of knowledge and narrative to be shared with the full spectrum of material that traditionally communicates it.

Many of the photographs used in this site belong to the Chicago Dzviti Collection, held in the University of Rochester’s Department of Rare Books, Special Collections & Preservation, and have been digitized by the Digital Scholarship Lab. This collection was acquired from Chicago Dzviti’s widow Lorraine Chitungo, with generous support from Dean Gloria Culver in AS&E.

Public drafts of academic work are usual: what does it mean for a digital scholarship project like this one to be drafted in public? Professor Kyker notes that, “In part, I decided to build Sekuru's Stories publicly so I can solicit feedback from readers on the site while it is still in process. Already, I have heard from quite a few readers with useful comments and suggestions ranging from translation errors to glitches with outside platforms integrated within the site. Perhaps more importantly I wanted to give people the opportunity to subscribe and read through the new material I post each week in installments as it is going up. Given the sheer amount of material that will eventually be housed on the site, I am working on the assumption that many readers will be more likely to read a post every week than to deeply engage with the entire site once it is built. It means that the material is open to feedback, additions, and change.”

Having launched in January, the project has received over 7,500 page views to date, and there are currently eighty subscribers receiving the project’s updates. Professor Kyker has received feedback from people around the world, connecting with communities inside and outside of academia. Faculty and students from Grinnell College, The University of Dayton, Grand Valley State University, Tufts University, and Wesleyan University, to name a few, have already started using the site for their research and teaching. Final publication will be complete in September, 2019.