William Caxton (ca. 1420-1491) was the first Englishman to be involved in the art of printing, which he introduced in England in 1476. 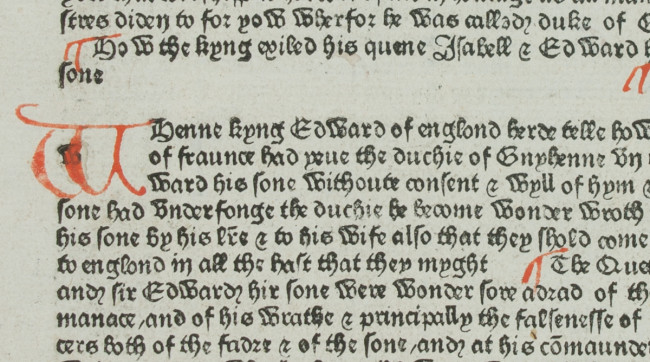 Dr. Christopher de Hamel argues that there are two main themes in the creation of leaf books. First, one might cut up a book so its leaves can be reused to improve another book. The second is relic collecting (De Hamel, 2005: 6). In fact, the practice of creating leaf books goes back to the Middle Ages, becoming very popular in the fifteenth century, when woodcuts and manuscript leaves, particularly those containing spectacular illuminations, were either bound in or pasted in devotional manuscripts. For instance, in our collection, we have an outstanding example of a hand-colored woodcut pasted on the front pastedown paper of a fifteenth-century German manuscript, Der Stachel der Liebe. In the eighteenth-century, we observe a more secular attitude. Religious fetishism is replaced by a broader collecting scope, including the gathering of leaves printed by the great printers of the fifteenth and sixteenth centuries. Probably, the idea of combining leaves with scholarly essays goes back to Rev. James Granger, who popularized the practice of inserting leaves in reference books—some bibliographers employ the term "grangerized" to refer to "extra-illustrated". In the nineteenth-century, we encounter the famous case of John Ruskin (1819-1900), who, oddly, created leaf collections out of his own collection of medieval manuscripts. On 30 December 1853, he wrote in his diary: "Set some papers in order and cut out some leaves from large missal; took me till 12 o'clock" (Evans & Whitehouse, 1958: 486). On 1 January 1854 he noted: "Put two pages of missal in frames" (Evans & Whitehouse, 1958: 487). And on 3 January 1854 he writes the following entry: "Cut missal up in evening—hard work—read some of Wilkinson's Egypt" (Evans & Whitehouse, 1958: 488). Scholars often cite Ruskin's practice as an example of cultural vandalism since he destroyed the bibliographical evidence showing how a particular medieval text was materialized in a codex format. Certainly, leaf collecting itself raises serious questions about the ethical legitimacy of creating leaf books, which in fact were very popular among bibliophiles in the first decades of the twentieth century. Usually, publishers would argue that these leaves came from a book already imperfect, and that by disbinding a manuscript, or printed book, they were actually making scholarship available to a wider audience, particularly because these leaves were normally accompanied by a learned essay. Our Collection Highlight is an example of this type of editorial enterprise.

The first book to include an original leaf from the works of William Caxton was published in 1905: William Caxton, by E. Gordon Duff (Chicago: The Caxton Club, 1905). Four other editions of Caxton's leaves followed in the next three decades. Our Collection Highlight is one of them. In 1933, the bookselling firm William H. Robinson commissioned a scholarly essay on the life and work of William Caxton from Holbrook Jackson (1874-1948). The brothers Lionel and Philip Robinson were then in charge of this firm, which specialized in antiquarian books and manuscripts. In total, sixty-eight separate leaves were used for this limited edition, which, they claimed, was made possible by using an incomplete copy of the first edition of The Chronicles of England (Westminster: William Caxton, 10 June 1480 (BMC, 2007: 116-7). While in other publications of this kind the leaf is tipped in, the publisher of this edition decided to place the leaf in its own separate folder. An additional folder contains Jackson's essay. 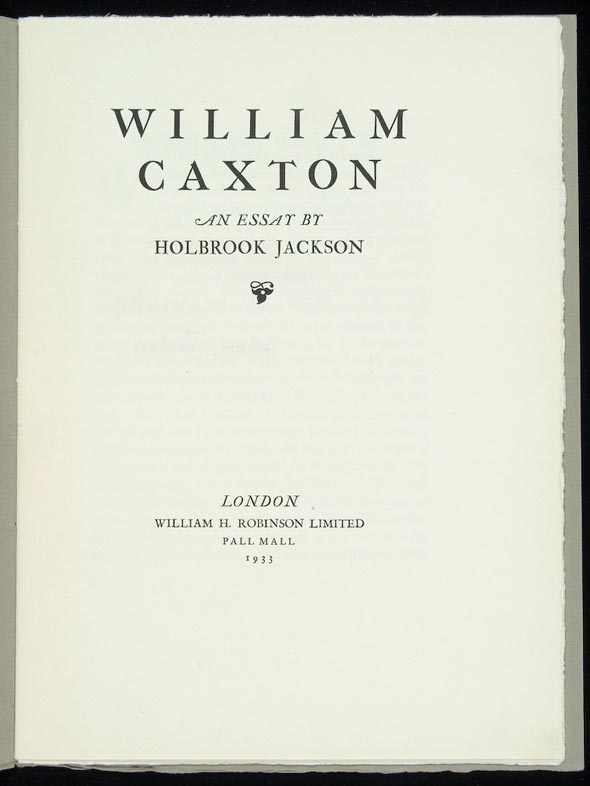 In the first edition of The Chronicles of England Caxton materialized an important typographical change designed to include larger portions of text in each sheet of paper. He first employed what scholars designate as "type 4," a reduced version of a previous "type 2", which, in turn, is a free interpretation of several Flemish hands of that period (Painter, 1977: 101); BMC, 2007: 336). As with the three previous types, it is very likely that Caxton commissioned type 4 from the well-known German printer and punchcutter Johan Veldener. Other remarkable features of this first edition of the Chronicles are the straightening of the line-endings and the introduction of signatures (Painter, 1977: 101; BMC, 2007: 117). The hand-made rubrication in this copy is not merely ornamental but is meant to guide the readers through the text. 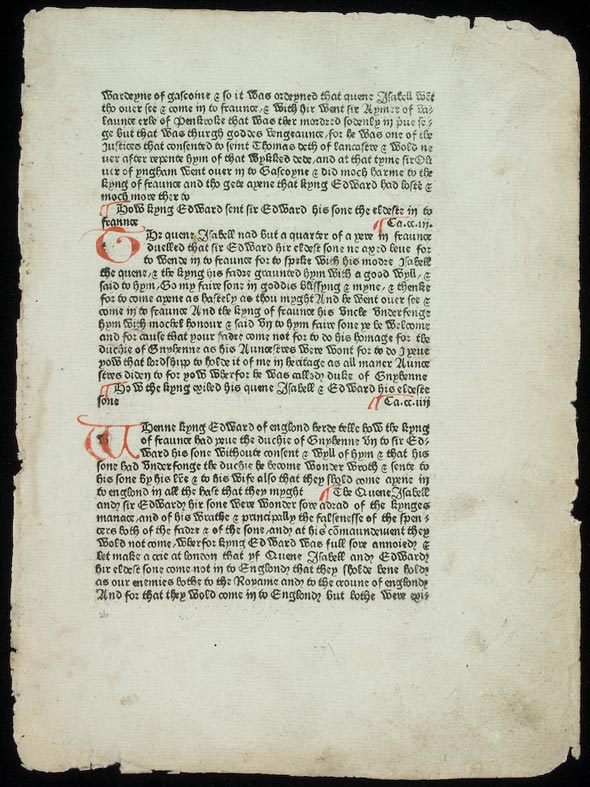 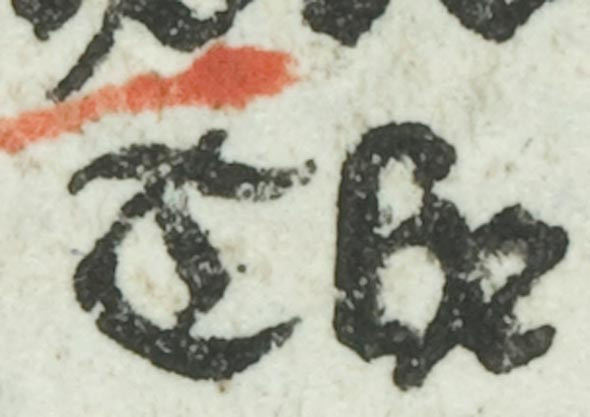 William Caxton (ca. 1420-1491) was the first Englishman to be involved in the art of printing, which he introduced in England in 1476. Originally, Caxton was a cloth merchant who lived abroad in the Low Countries, where he became extremely wealthy and acquired considerable political influence in the English trading community. As the main representative of this milieu in Bruges, Caxton was also involved in diplomatic missions on behalf of the English crown. Later in life, when he was around fifty years old, he started the English translation of Raoul Le Fèvre's Recueil des histoires de Troye, a medieval adaptation of the ancient legends of the Trojan War. Essentially, Caxton's aim was to dedicate his English version to Margaret of York, sister of Edward IV, and bride of the duke of Burgundy, Charles the Bold (Painter, 1977; Needham, 1986: 15-6).

Caxton might have lost his privileged political position in Bruges since at the end of 1470 we suddenly find him in Cologne, where he lived for one and a half years. A vibrant commercial city, Cologne was then turning into an important printing center as well. Hardly two decades after Gutenberg's introduction of the system of printing by moveable type, the new invention rapidly spread from its birthplace in Mainz not only to cities across Germany, but also to other European lands such as Italy, France, the Low Countries, and Spain. In September 1471, Caxton completed his translation of Le Fèvre's Recueil, and it is plausible that he then conceived the idea of bringing his manuscript into print. In fact, he first materialized his interest in the printing industry by commissioning to one of Cologne's presses the printing of Bartholomaeus Anglicus'De proprietatibus rerum (Cologne: Johann Schilling for William Caxton, [1472]). In 1473, Caxton returned to Bruges, where he set up the first press of this town, and soon printed his translation of Le Fèvre's famous work: Recuyell of the Histories of Troy (Bruges: William Caxton, [1473-4]), the first book printed in the English language. In 1474 he published another of his own translations, Jacobus de Cessolis' Game and Play of Chess (Bruges: William Caxton, 1474), and within the next two years four more books were printed in Bruges, all of them in French (Painter, 1977; Needham, 1986: 15-6; 83-4). 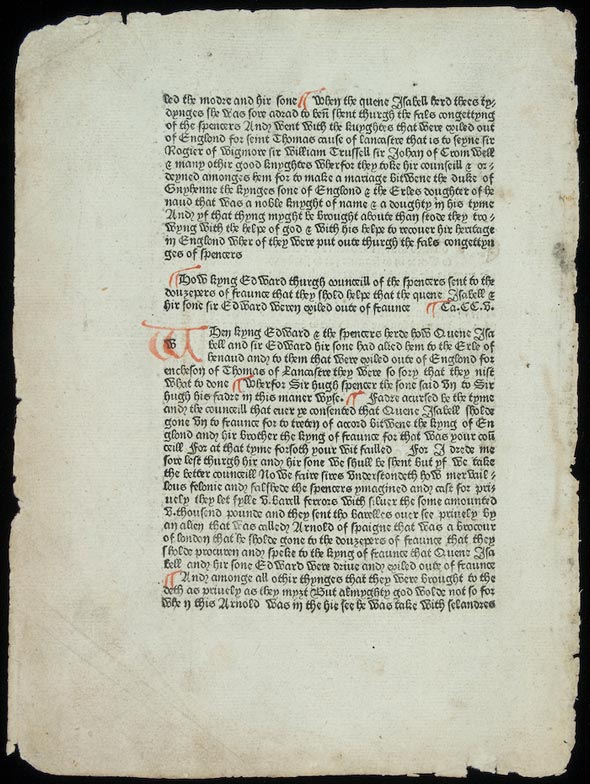 Hellinga, Lotte. Caxton in Focus: The Beginning of Printing in England. London: The British Library, 1982.

Needham, Paul. The Printer & the Pardoner: an Unrecorded Indulgence Printed by William Caxton for the Hospital of St. Mary Rounceval, Charing Cross.Washington: Library of Congress, 1986.