Collection Highlight: Dryden's The Hind and the Panther

This volume was presented to the library by alumnus, bibliographer, and appraiser of rare books, Robert F. Metzdorf (1912-1975). 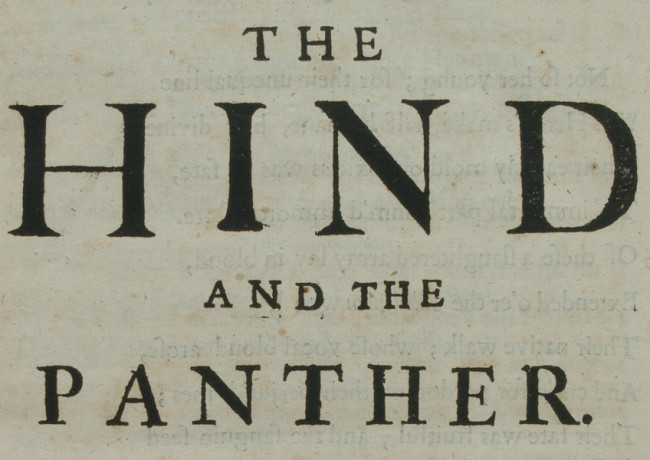 Charles II converted to Catholicism shortly before his death on 6 February, 1685, and was succeeded by his publicly Catholic brother James. As Dryden had done on previous occasions—in Astraea Redux. A Poem on the Restoration of Charles the Second (1660) and in To his Sacred Majesty, A Panegyrick on His Coronation (1661)— he praised his late master in the pindaric ode Threnodia Augustalis (1685) as the king who brought the nation peace and reconciliation. Furthermore, by invoking the presence of saints, he betrayed signs of Catholic devotion as he extolled the new king. An entry in the diary of John Evelyn on January 19, 1686, suggests that Dryden himself might have converted to Catholicism in 1685:

Two years after the publication of Threnodia Augustalis, Dryden would publish what literary critics consider his major Catholic work, the allegoric poem The Hind and the Panther (1687). 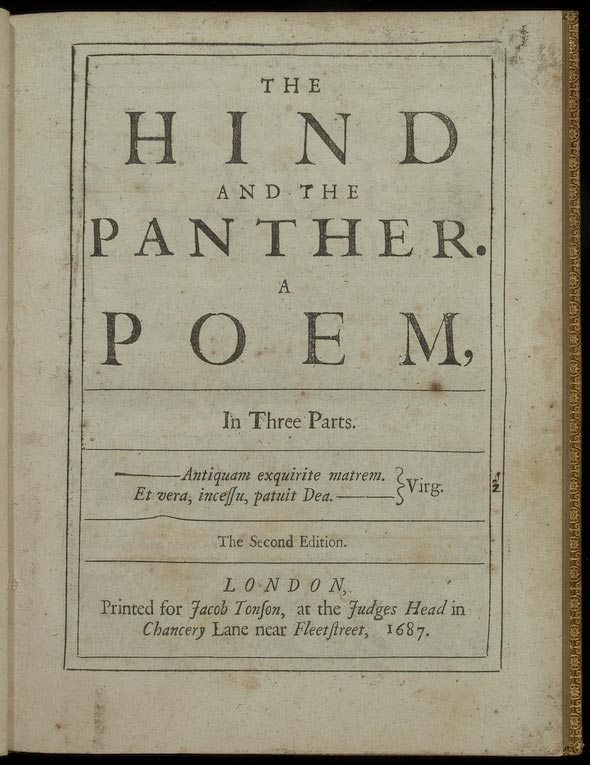 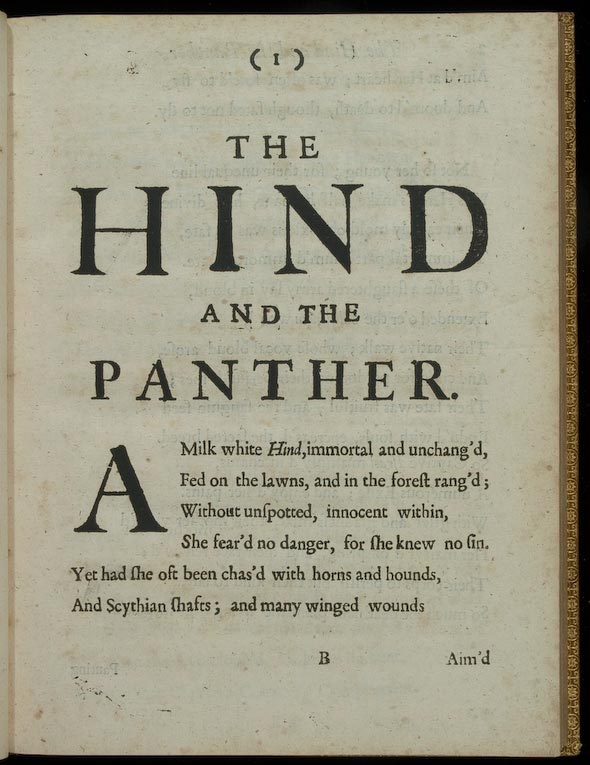 Essentially, The Hind and the Panther is a 2,500-line animal fable divided into three parts. In the first part we are introduced to the Hind, which represents the Church of Rome, to the Panther, representing the Church of England, and finally to other beasts of the forest figuring as different sects and denominations. The second part is a theological debate between the Hind and the Panther, and in the third part, the Hind and the Panther each tell a fable. The Panther's story is about swallows being persuaded to stay beyond the summer by a martin, who might represent one of King James II's advisors, and about their suffering when winter eventually returns. The Hind's narrative concerns a farm ruled by a good man (James), to which doves (the Anglican clergy) bring a buzzard to supervise the poultry (the Catholic clergy). Predictably, the buzzard becomes a tyrant, an oppressor of all the inhabitants of the farm.

"Or forc'd by Fear, or by Ambition led,
Or both conjoyn'd, his Native clime he fled:

Or forc'd by Fear, or by his Profit led,
Or both, his own unhappy clyme he fled:

In our second edition, these lines read as follows:

"Or forc'd by Fear, or by his Profit led,
Or both conjoyn'd, his Native clime he fled: 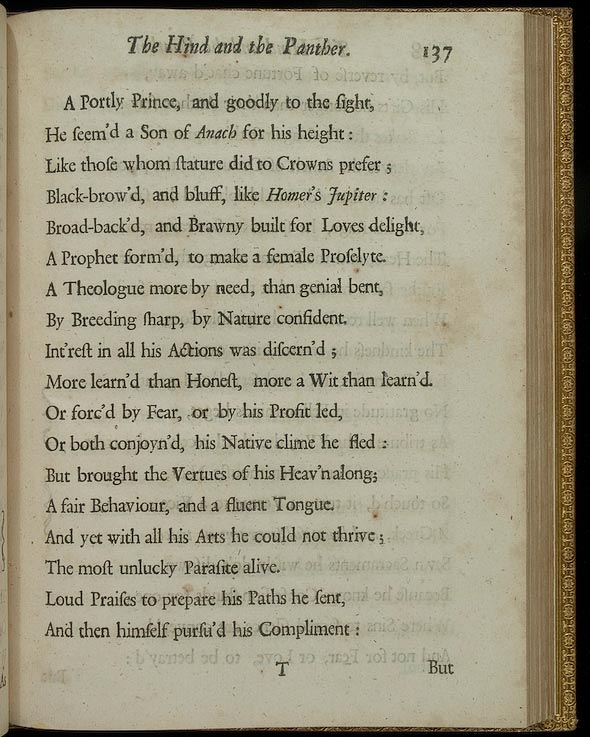 In a previous Collection Highlight, we mentioned that Dryden saw his Heroique Stanza (1659) in honor of Oliver Cromwell being reprinted by his Whig enemies in 1681 and 1687. Similarly, after the publication of The Hind and the Panther, Dryden's enemies again reminded readers of the poet's previous loyalties, in this case of his devotion to the Anglican Church as shown in Religio Laici (1682). It is indeed an extraordinary stroke of luck that our volume also contains most of these satiric pamphlets. In order of appearance, they are as follows: Matthew Prior's The Hind and the Panther Transvers'd to the Story of the Country-Mouse and the City-Mouse. Much Malice mingled with a little Wit (London: W. Davis, 1687) (Macdonald, 1939: 241a); Robert Gould's The Laureat. Jack Squabbs History in a Little Drawn, Down to his Evening, from his Early Dawn ([London: 1687]) (Macdonald, 1939: 246b); The Revolter. A Trage-Comedy Acted between the Hind and the Panther, and Religio Laici, &c (London: 1687) (Macdonald, 1939: 242); Notes upon Mr. Dryden's Poems in Four Letters. By M. Clifford, late Master of the Charter House, London. To which are annexed some Reflections upon the Hind and Panther. By Another Hand (London: 1687) (Macdonald, 1939: 244); The Reasons of Mr. Bays Changing his Religion. Considered in a Dialogue between Crites, Eugenius, and Mr Bays (London: S.T., 1688) (Macdonald, 1939: 248a). 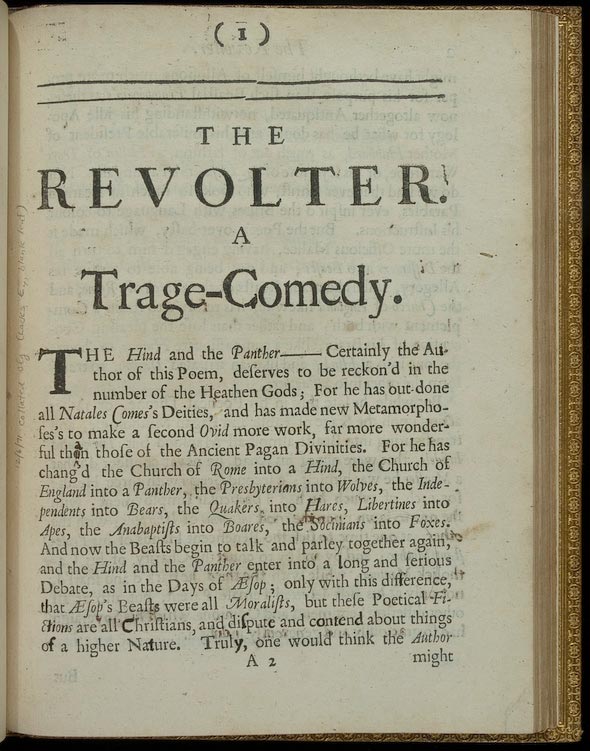 This volume was presented to the library by the well-known bibliographer and appraiser of rare books, Robert F. Metzdorf (1912-1975).