Johann Amerbach (c. 1443-1513) was Basle's leading editor, printer, and bookseller at the beginning of the sixteenth century.

Both the hand-colored bookplate and the Latin inscription (Duplum Bibliothecae regiae Monacensis) on the front pastedown paper of each volume tell us part of the provenance history of this collection. It belonged to Ioannes Ecker, probably a rich landowner--as suggested by the harrow on his "coat of arms"--and a magistrate (prepositus) of the town of Schäftlarn. Eventually these volumes came to reside in the local monastery. Located not far from Munich in Upper Bavaria, the monastery was originally a Premonstratensian abbey, founded in 762 by the priest Waltrich. After being destroyed by fire in 1527, it was reconstructed at the end of the sixteenth century, and continued as an abbey until its secularization in 1803. In 1865 King Louis I of Bavaria purchased it for 92,000 guldens, and gave it to the Benedictines the following year. It is likely that this set was eventually sold on the grounds of being a duplicate (duplum). All nine volumes were presented to the University of Rochester by Gilbert J.C. McCurdy (1895-1978) in December 1972. He is perhaps best remembered as the President of the McCurdy Department Store and the planner of Midtown Plaza in Rochester, which was built in 1962. Being a committed supporter of the Rochester community, he and his wife, Virginia, donated the Interfaith Chapel to the University of Rochester (Barnes & Heininger, 1984:140). 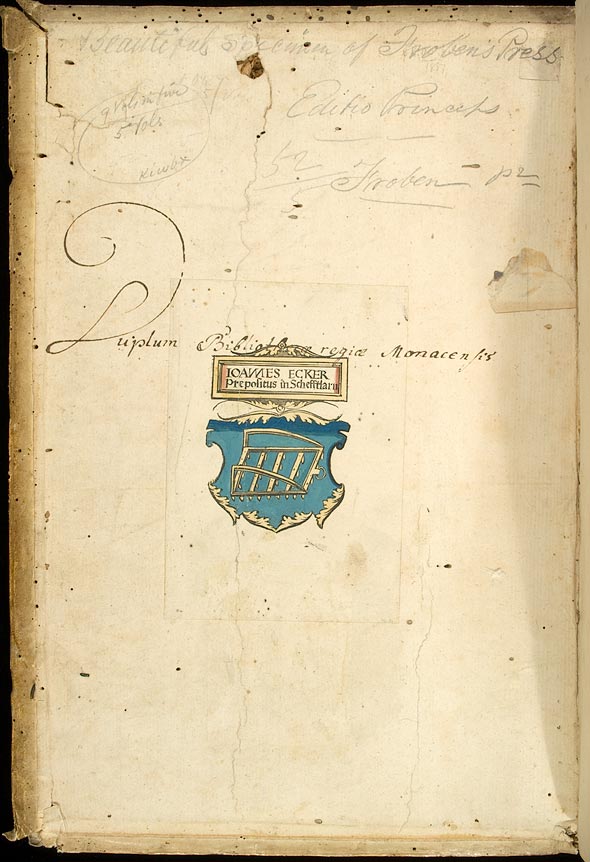 Johann Froben (c. 1460-1527) printed two milestone editions in Basle in 1516: the Novum instrumentum, the first edition of Erasmus of Rotterdam's (d. 1536) New Testament, and the Opera Omnia of St Jerome in nine folio volumes. Our Collection Highlight is the first volume of this multi-volume series.

Johann Amerbach (c. 1443-1513), who was Basle's leading editor, printer, and bookseller at the beginning of the sixteenth century, had begun the preparation for printing St Jerome's works as early as 1507, but in 1513 he died before he could complete the editorial work. Ultimately, Erasmus edited the first four volumes, which comprise theEpistola and the Spuria (works wrongly attributed to St Jerome), while Amerbach's sons, Bruno (1484-1519), Basilius (1488-1535) and Bonifacius (1495-1562) worked on the scriptural commentaries of the remaining five volumes. As the wording of the title page shows, Erasmus presented himself as the restorer of St Jerome's opera mutilata et depravatissima. However, argues Erasmus, they have been now emended (emendata) and edited along with topic summaries and learned glosses (cum argvmentis et scholiis). Curiously, this committed desire for editorial accuracy was spoilt by an embarrassing spelling mistake the compositor made in the imprint: Acvratisssima should be spelt accvratisima or adcvratissima! 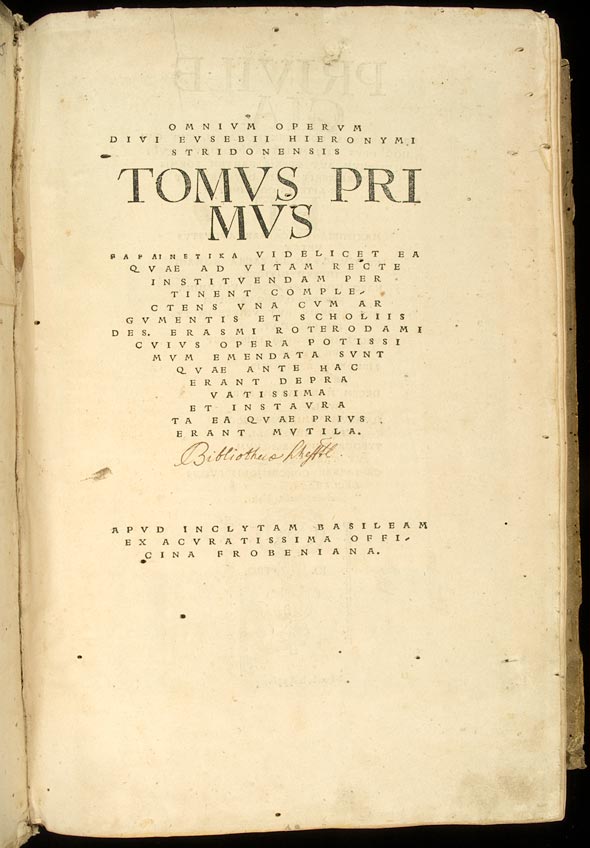 Erasmus and Froben would eventually form a renowned publishing partnership (Shaw, 1986; Jardine, 1993; Pabel, 2005). Ironically, Froben first attempted to attract Erasmus' attention by printing in 1513 an unauthorized version of his' Adagiorum chiliades, whose second edition Aldus Manutius had printed in Venice in 1508. This piracy, which actually contained some textual emendations, praised the humanist as the "ornament of Germany" on its title page: Erasmi Roterdami Germaniae Decoris.Erasmus accepted this "subtle" invitation, as he was eager to publish a series of scholarly projects when he first met Froben in 1514. Among these was an edition of St. Jerome's letters. In fact, Erasmus was already advertising the edition of Jerome's works as early as 1514. In the second Strassburg printing (and fifth edition) of De duplici copia verborum ac rerum commentarii duo (Strassburg: Matthias Schürer, 1514), he included a long letter addressed to the humanist Jakob Wimpfeling (1450-1528), dated on 21 September 1514, explaining his future publishing plans. Here is a brief extract (letter 305):

My Adagia has now begun to be printed. There remains the New Testament translated by me, with the Greek facing, and notes on it by me. Then the letters of St Jerome with the text corrected by me and the spurious and wrongly ascribed pieces removed, also with explanatory comments of mine. Besides those, all the works of Seneca the orator corrected by me with the greatest efforts; to which I shall perhaps add something in the way of notes if I can find the time. There are other small pieces as well, about which I am less concerned; and if the printer here will undertake them, I shall retire into myself like a tortoise, not to go to sleep but to be completely free for all this work (Mynors and Thomson, 1976: 32).

Erasmus' confidence in the abilities of Froben as a printer is shown in the following passage from his letter written in London on 15 May 1515, and addressed to Raffaele Riario (1461-1521), Cardinal of San Giorgio, (letter 333):

This great work is now at press, and will run, I think, to ten volumes; and so much expense and care have been lavished on the printing that I am prepared to swear that for these twenty years no work has issued from any printing-house that had so much money and so much effort spent on it. I doubt if Jerome himself expended so much effort on the writings of his works as they will cost me in the correction. At least I have thrown myself into this task so zealously that one could almost say that I had worked myself to death that Jerome might live again (Mynors and Thomson, 1976: 89-90). 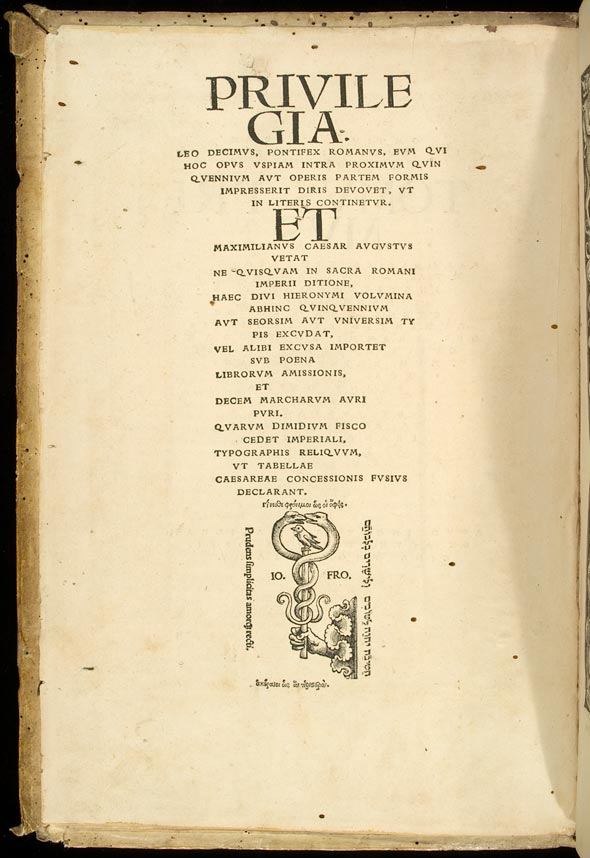 On the verso of the title page we read about two privilegia prohibiting the reprinting of any part of this edition within the following five years. While at the end of the fifteenth century readers would find the privilegium at the end of the book as part of the colophon, the location of these two privilegia within the preliminary pages of the book reflected a new publishing trend designed to emphasize the institutional support received by authors and publishers. In theory, this edition seemed well protected. It had the approval of Pope Leo X and Maximilian I, the Holy Roman Emperor. Nevertheless, a printer in Cologne, Eucherius Hirtzhorn (also known as Cervicornus), pirated parts of it in 1517 and 1518. Here are two examples of these unauthorized editions: Eximii doctoris Hieronymi Stridonensis vita, ex ipsius potissimum literi contexta(Cologne: Eucharius Cervicornus, 1517); Divi Hieronymi Epistolae tres (Cologne: [Johann Gymnich], 1518). In a letter to Erasmus, dated the second half of March 1518, Bruno Amerbach refers to the latter of these two piracies in the following terms (letter 802):

A certain Eucharius Cervicornus of Cologne has copied some letters of Jerome from our edition. We have taken him to court in Frankfurt for neglecting and indeed despising privileges from the highest authorities. He will pay the penalty, if I mistake not, for his rashness. Jean Petit the Paris printer is a new menace; he threatens to counterfeit the whole work. His efforts can be suppressed by one note from you.
Farewell, from Frankfurt, late at night (Mynors and Thomson, 1979: 352).

Below the privilegia we see Froben's printing device: a dove resting on the staff of Mercury around which two serpents entwine themselves. As we have previously seen in other printing devices created by Aldus Manutius, Henri Estienne II, and Christophe Plantin, these designs reflect the Renaissance passion for meaningful iconography. In particular, Froben's device echoes Matthew 10.16 (King James Version): "Behold, I send you forth as sheep in the midst of wolves: be ye therefore wise as serpents, and harmless as doves". In addition, this image also reinforces the prestige of Froben's editions as Erasmus clearly stated in the 1526 expanded version of the adage Festina lente. Here is a brief passage from that entry:

If only the princes on our side of the Alps encouraged liberal studies in the open-handed way one finds in Italy, the Froben serpents would not be much worse off than the Aldine dolphin. Aldus, making haste slowly, has acquired as much gold as he has reputation, and richly deserves both. Froben holds his staff always upright with no purpose in view except the public good, he never swerves from the innocence of his doves, and expresses the wisdom of serpents more in his badge than his behavior; and so he is richer in reputation than in coin. But it is time to put a stop to these digressions (Mynors, 1991: 15).

At the end of one of the indices included at the beginning of this first volume (EORVM QUAE PERIERVNT INDEX) Erasmus warns his readers against criticism of his editorial decisions. He assures them that he and the Amerbach brothers worked hard with diligent and honest faith (Sedulo bonaque fide laboratum est a nobis, & optimis fratribus Amorbachiis) so that scholars could read the works of St Jerome with as few corruptions as possible. He even claims that his is the best printed edition of the last thirty years (intra triginta annos nullum opus excusum typis, pari fide, pari cura, pari impendio). Indeed, editors of classical works inserted this type of warning, or clarification, in the form of prefaces or dedications to the readers. The overall idea was to convince scholars that the edition they had in their hands had managed to overcome previous mistakes from manuscripts and early-printed editions. However, printing did not necessarily produce editorial accuracy. It all depended on the intellectual standards of printers and publishers! 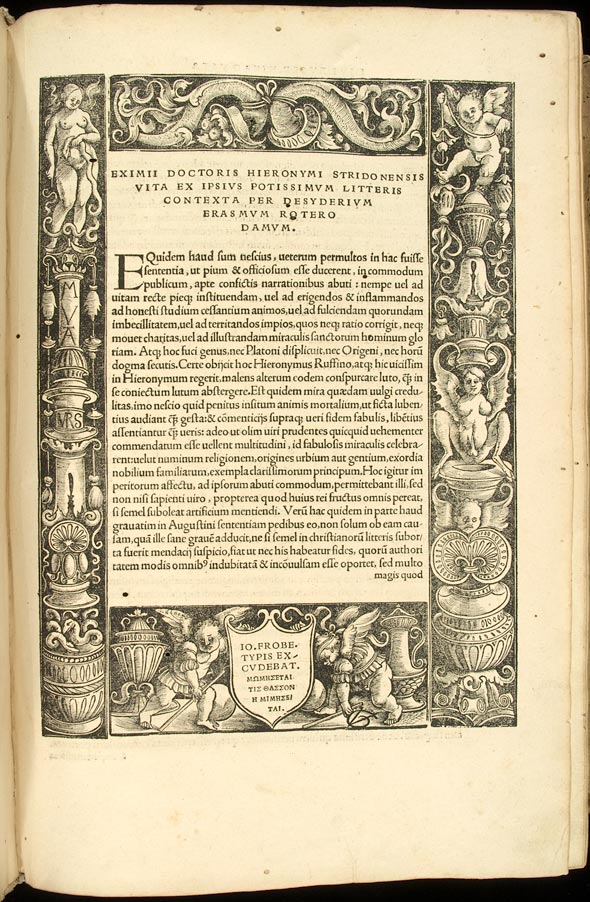 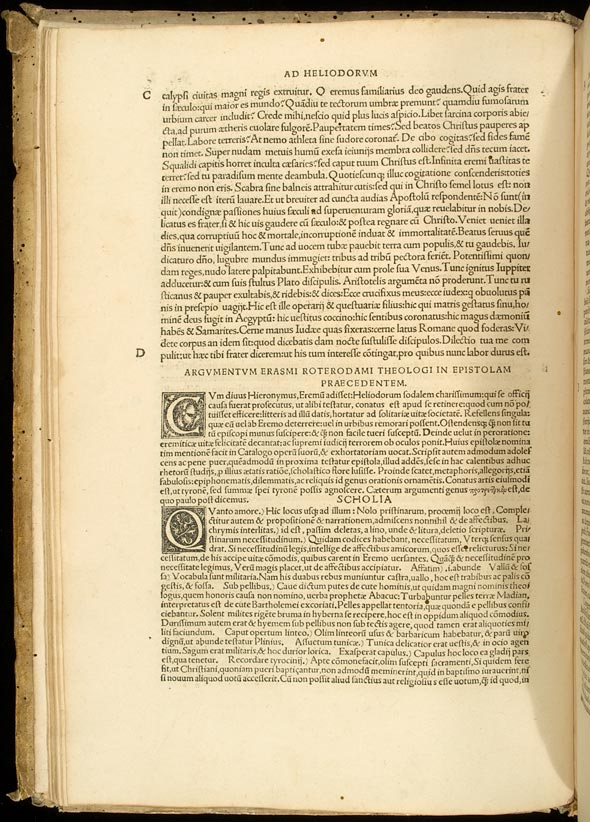 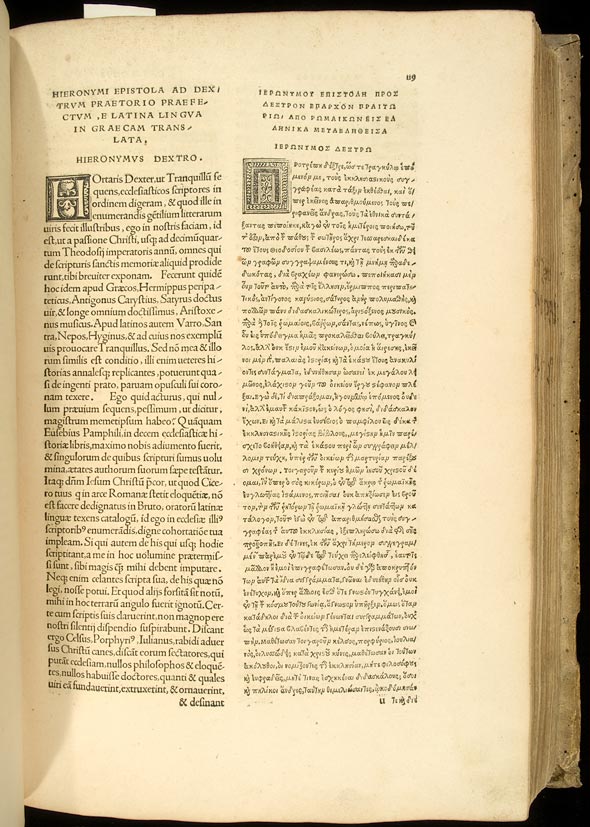 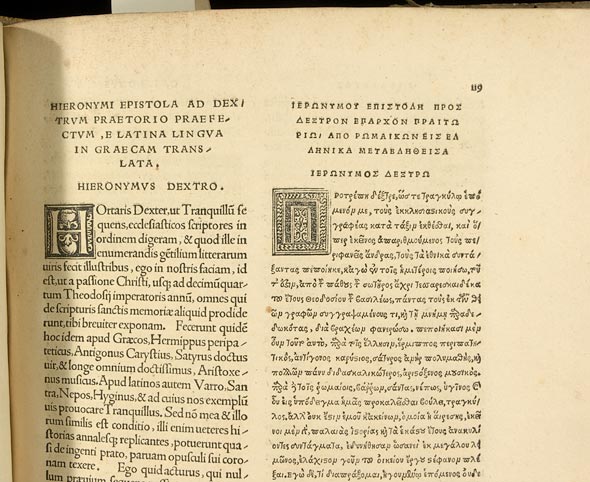 ________. Erasmus on his Times: A Shortened Version of the "Adages" of Erasmus. Trans. Margaret Mann Phillips. Cambridge and New York: Cambridge University Press, 1967.

Pabel, Hilmar M. "Credit, Paratext, and Editorial Strategies in Erasmus of Rotterdam's Editions of Jerome." In Cognition of the Book: Typologies of Formal Organization of Knowledge in the Printed Book of the Early Modern Period. Ed. Karl A.E. Enenkel and Wolfgang Neuber. Leiden, Boston: Brill, 2005.