The German cosmographer and scholar of Hebrew Sebastian Münster (1489-1552) published four editions of Ptolemy's Geography during his lifetime. 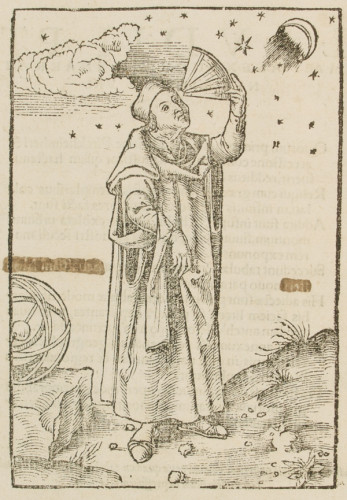 The Egyptian astronomer, mathematician, and geographer, Claudius Ptolemaeus (in English commonly known as Ptolemy), composed the Geography in Greek in Alexandria about 160 A.D. Overall, this eight-book treatise contains the descriptions and locations of more than 8,000 places in the ancient world. Book 1 is a general introduction to the subject, including a discussion of the work of the geographer Marinus of Tyre, who had compiled a list of locations based on accounts from land itineraries and coastal voyages. This first book also contains two projections on how to draw a map of the so-called oikoumene, a Greek term meaning 'the inhabited or known world', then comprising Europe, Africa, and Asia. Books 2-7 contain the longitudes and latitudes of around 8,000 locations, and book 7 ends with instructions for a representation of a globe with the oikoumene on a grid. Finally, book 8 includes descriptions of 26 regional maps: 10 of Europe, 4 of Africa, and 12 of Asia.

Though Ptolemy argues that drawing a map is the way to eliminate the type of errors found in Marinus' writings, therefore impicitly encouraging copists to execute these drawings (1.17), it is unlikely that manuscript copies of the Geography actually circulated with maps in Antiquity. In fact, there were some physical constrictions that prevented Ptolemy's projections from being materialized properly. If a map of the world could be easily shown on the wall of a portico, rolls of papyrus posed serious space limitations, their average height reaching only 30 cm. For instance, we can refer to a relatively recent discovery of a fragment of a papyrus roll from the first century B.C. containing a Greek geographical treatise with a map. The text is a description of Spain from Artemidorus' Geography, and the roll itself can be reconstructed as being originally 32.5 cm high and 93.5 cm wide. This size created a visual distortion with East-West distances represented on a much larger scale than North-South distances (Galazzi & Kramer, 1998: 189-208).

The Geography was often translated into Arabic from the ninth century onward. Conversely, the Greek text was thought to have disappeared until it was discovered by Maximus Planudes (1260-c.1310) around 1295. Eventually, Planudes arranged that the maps be drawn following Ptolemy's instructions, and what is believed to be his version of the Geography only survives in two manuscripts and one fragment, the most famous being Urb. gr. 82. held in the Vatican Library. It includes the complete text of Books 1-7, the map of the oikoumene according to Ptolemy's first projection with meridians, and lastly, the 26 regional maps on grids, each preceded by its description taken from Book 8. This particular version, which is conventionally known as the A recension, traveled to Italy from Byzantium in the early fifteenth century, becoming the model for the Latin versions, both in manuscript and printed editions (Swerdlow, 1993: 157-8).

The first Latin translation of the Geography was begun by Manuel Chrysoloras of Constantinople (d. 1415), who taught Greek in Florence and became secretary to Pope Gregory XII. His translation was completed (1406-9) by Jacopo Angeli da Scarperia, who introduced a new version of the title, Cosmographia, instead of Chrysoloras' choice, Geographia. Remarkably, the earliest manuscripts of Jacopo's version did not include maps (Swerdlow, 1993: 160).

With the introduction of printing by movable type in western Europe around the second half of the fifteenth century, the Geography immediately became an obvious candidate to undergo the transfer from manuscript to print. The illustrated editio princeps, which was published in Bologna in 1477, contains engravings of the 26 regional maps as well as the map of the oikoumene, all of them printed from copperplates. By the year 1500, at least six incunable editions with maps had been published in Europe, mostly in Italy (Campbell, 1987: 122-38), and following the discoveries from the Castilian and Portuguese voyages, European scholars started using Polemy's treatise as a platform upon which they would add new locations. Indeed, contrary to the vagueness of the allegorical maps of the Middle Ages, the Geography of Ptolemy offered a useful scientific framework, best exemplified by its geometrical grid of lines of longitude and latitude that created a potentially infinite space waiting to be filled by the printer (Brotton, 2000: 42). Moreover, at the end of the sixteenth century, the Flemish cartographers Gerardus Mercator (1512-1594) and Abraham Ortelius (1527-1598) published important revisions of the Geography, correcting some of Ptolemy's errors. For instance, according to Ptolemy's calculations, the distance between Spain and China is 180°, when the correct estimation is actually about 130°. 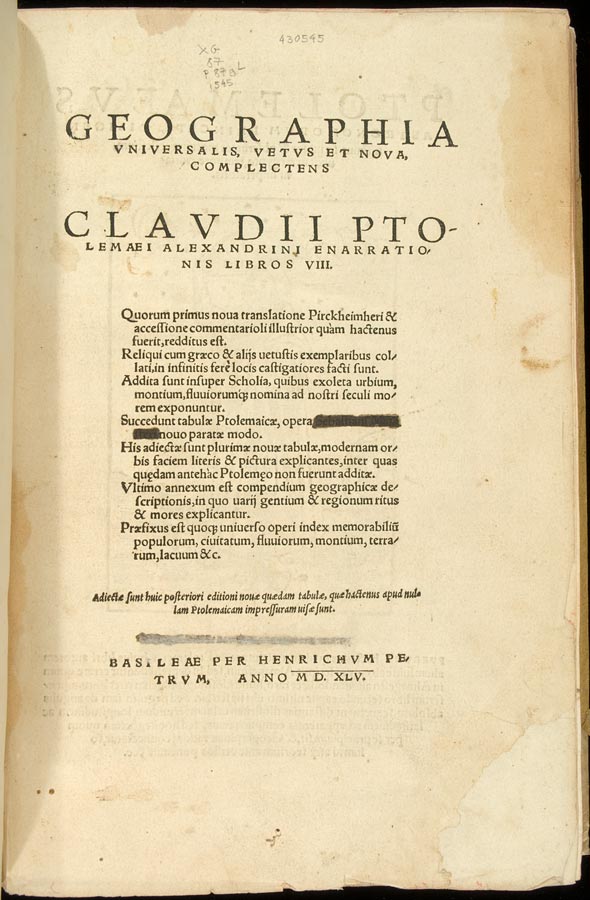 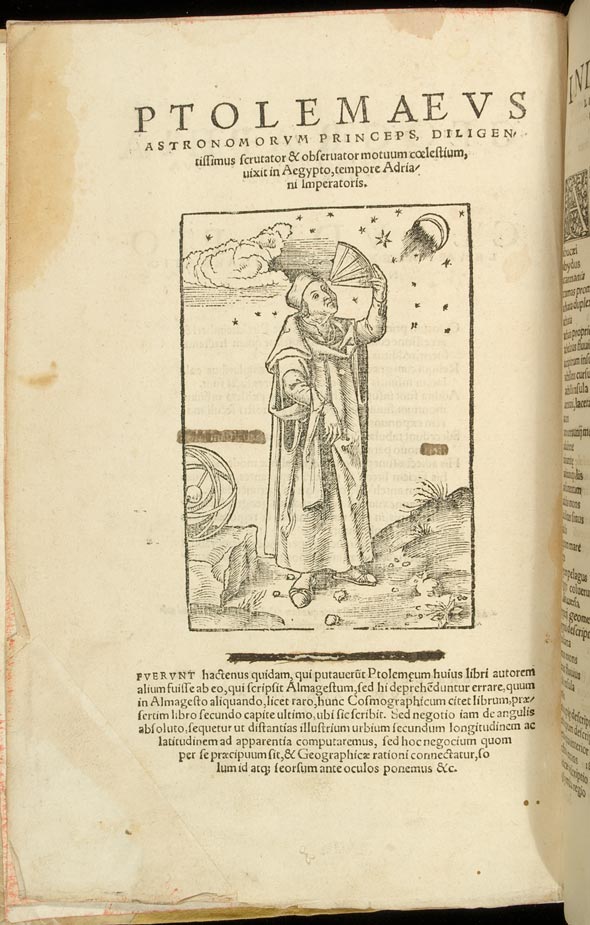 In both the title page and its own verso, which shows an illustration of Ptolemy (see above), one can see how part of the text has been crossed out. Actually, it happens again in the first page of the appendix as shown in the last image below. What are these "corrections"? A comparison with other copies of the same edition reveals that the reader of our copy wanted to hide the name of the editor, Sebastian Münster. Similarly, our copy of the second edition of Copernicus, which was also printed by Heinrich Petri in Basle, received this type of treatment. By the examination of external evidence, it seems clear that Münster's Geographia was partially censored, not for its content, but for the religious alliances of its editor. After leaving the Catholic Church in 1529, Münster employed his knowledge of Hebrew to the benefit of the Protestant cause, which explains why his name was always included in the editions of the Index librorum prohibitorum, first issued by Pope Paul IV in 1557.

The first woodcut in our edition is a map of the world (Typvs Orbis Vniversalis), in fact one of the three maps partially describing the geography of America. The other two are #46 and #54). Map #1 is a representation of the world as it was known among many geographers in the second half of the sixteenth century. It includes a description of Greenland and Iceland as one elongated peninsula attached to Europe, and of the American continent. 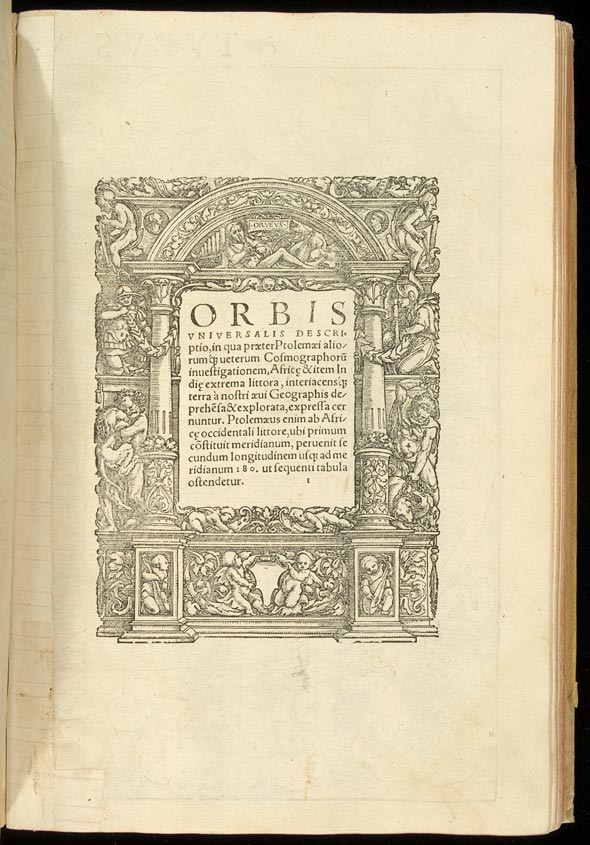 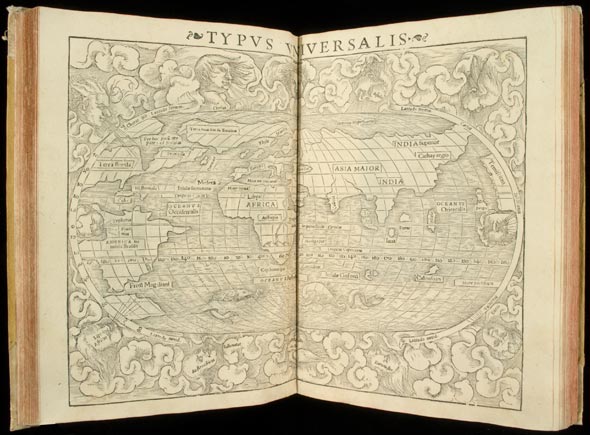 The map of Scythia included below is a good example of how both the legends and iconography related to ancient geography, particulary the ethnographic knowledge derived from encyclopedic works like Pliny the Elder's Naturalis Historia, were still popular during the Renaissance. Pliny the Elder describes the Chinese (Seres) as follows: "The Chinese, though mild in character, yet resemble wild animals, in that they also shun the company of the remainder of mankind, and wait for trade to come to them" (6.20.54); and the Scythians are described in this way: "This is the country of the Cannibal Scythians who eat human bodies; consequently the adjacent districts are waste deserts thronging with wild beasts lying in wait for human beings as savage as themselves" (6.20.53). In Antiquity, the region of Scythia embraced a large area in Eastern Europe and in Western and Central Asia (Smith, 1870: v.2, 936-45). The Imaus mons, a long mountain range running north to south, partly refers to what today is known as the Karakoram range, between China and Pakistan. Emodij montes is the Latin version for the Himalayas (Smith, 1870: v.2, 40-1). One can also see how a previous owner thought that the nudity of those monsters inhabiting the unknown world was a shameful thing to see! 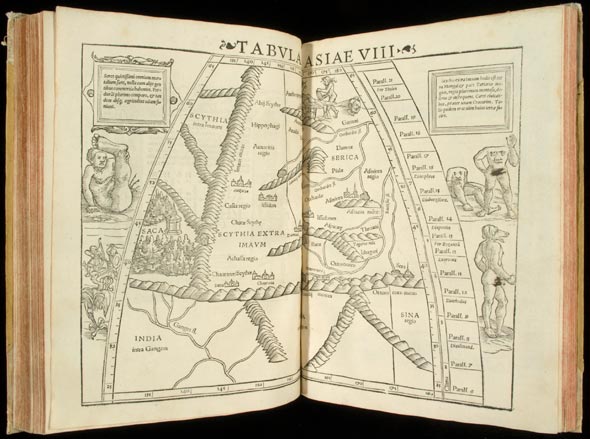 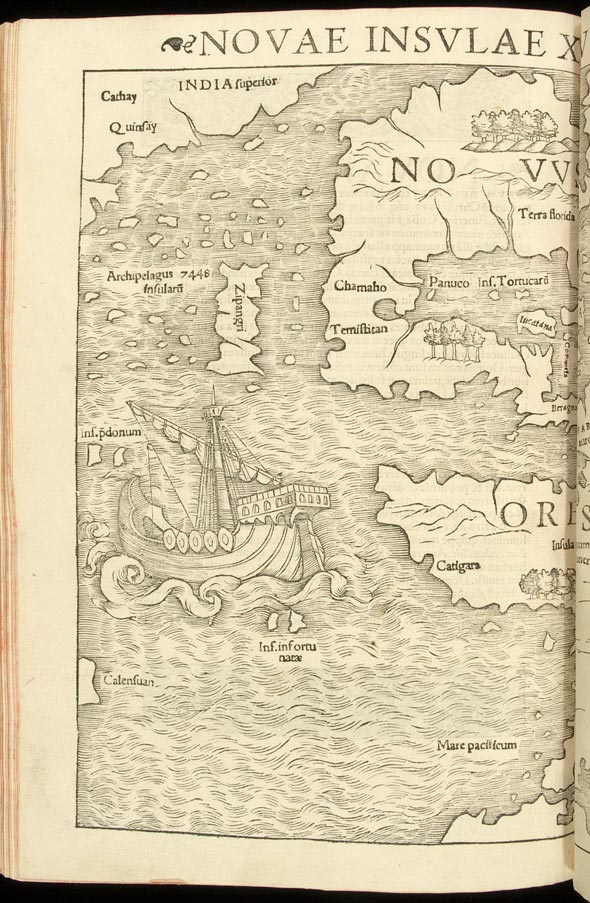 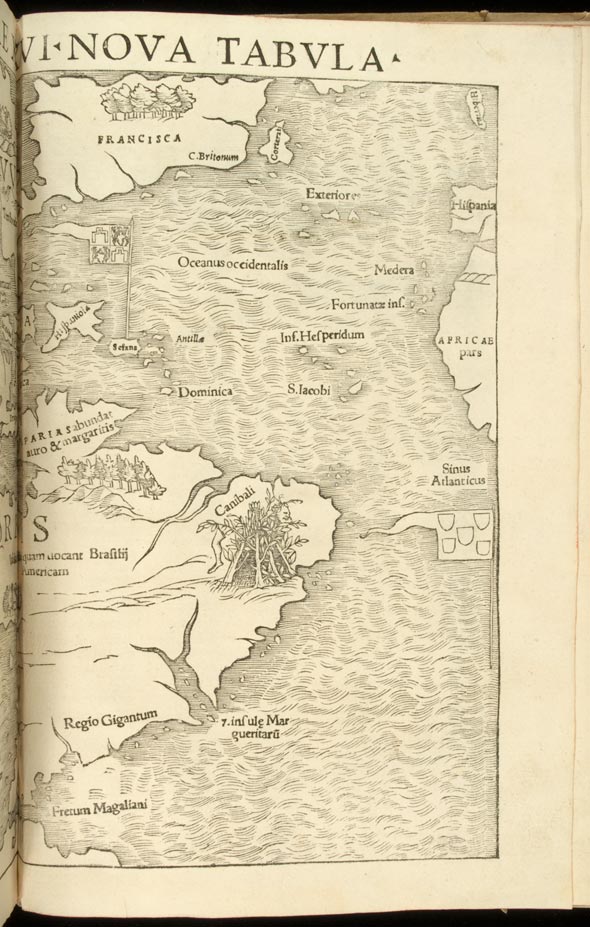 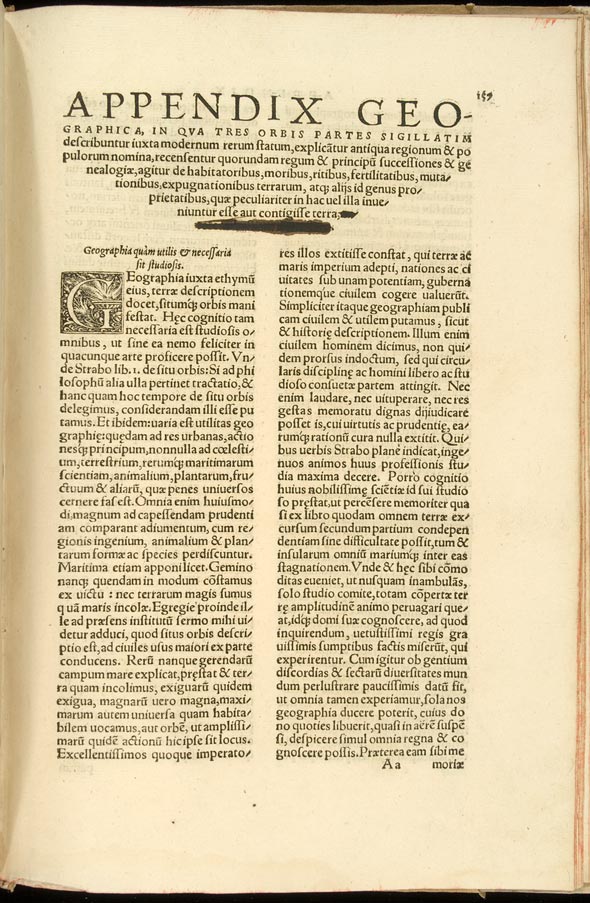 Sabin, Joseph. A Dictionary Relating to America, from its Discovery to the Present Time. 29 vols. New York: Joseph Sabin, 1868-1936.