The editor of this work, Edmond Malone (1741-1812), is best known as a Shakespearean scholar and an accomplished biographer. 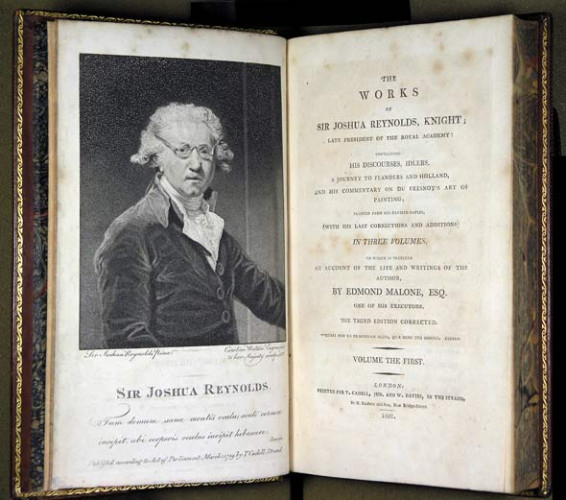 Sir Joshua Reynolds (1723-1792) dominated the artistic scene in England during the second half of the eighteenth century. An accomplished painter of portraits and historical scenes, Reynolds was also an art theorist who enthusiastically participated in the intellectual activities of the Royal Academy since its foundation in 1769. Between 1769-1790, he wrote 15 discourses on art, which are contained in volumes one and two of this set. Being a close friend of Samuel Johnson (1709-1784), Reynolds frequented the literary circles of London. In fact, Johnson helped launch Reynolds’ literary career by convincing him to write three essays for The Idler.

The first volume contains a stipple engraving reproducing one of Reynolds’ self-portraits. The engraver is Caroline Watson (1760/61-1814). Born in London, she was trained by her father, James Watson (1739/40? -1790), an Irish mezzotint engraver (Smith, 1882: vol. 4, 1487-88). However, she never worked in mezzotint but specialized in small-scale stipple engravings, most of them reproducing miniature portraits—in the stipple technique, the tonal effect is achieved by a mattoir, a punch-like metal tool with a head that projects a random pattern of dots or worm-like curves (Gascoigne, 2004: 14b). Ms. Watson was one of the few women engravers of her age who signed her own work (see caption in the low left corner: “Caroline Watson, engraver to her majesty”) and kept her own printing business—she published a number of prints from Fitzroy Street, London, in the 1780s.  Since James Watson had engraved many pictures by Sir Joshua Reynolds, it was natural that Sir Reynolds helped the career of the daughter of his collaborator, allowing her to engrave and publish two pictures in his possession: St Matthews after Rubens in 1788, and a miniature portrait of John Milton in 1786. Ms. Watson’s artistic reputation was consolidated after being appointed Engraver to Queen Charlotte in 1785 (Alexander, 1997: vol. 2, 1429-31). 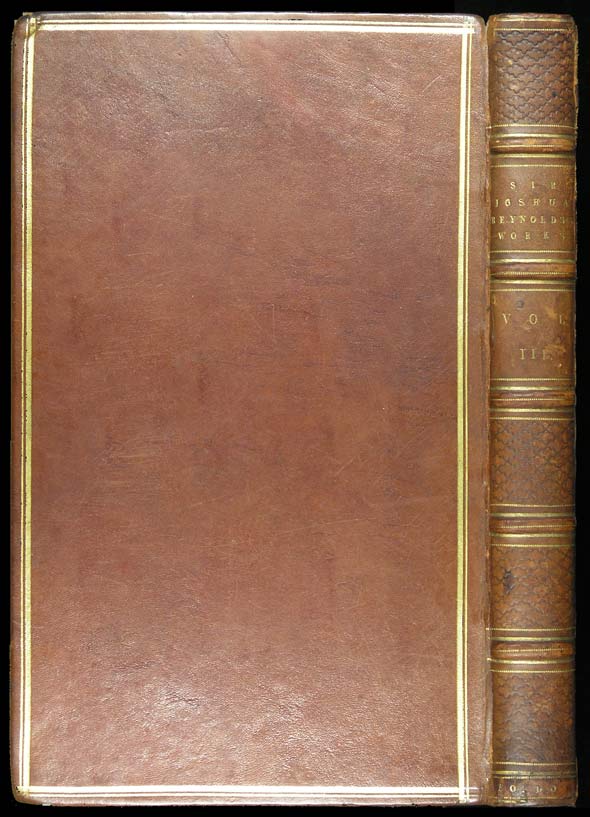 These three volumes are bound in the so-called Russia calf. This type of leather was employed in bookbinding in England in the eighteenth and early nineteenth centuries. Originating in Russia as a method of leather preparation, it was introduced in England as a leather variety in the seventeenth century. However, it was not specifically used for bookbinding until the early eighteenth century, the main period of popularity being 1770-1840. The method to obtain Russia calf can be described as follows: as part of the vegetable tanning process, which is designed to turn the skin into leather by means of vegetable components made of bark—in the case of Russia calf, the bark came from willow, poplar, or larch trees—the flesh side of the skin was cured with a mixture of birch-bark extracts. This substance gave the leather a pleasant odor that, apparently, was intended to repel insects. Finally, the leather was dyed red, or reddish brown like our three volumes. Usually, Russia calf was thicker than normal calf, and it was easily recognized from the mesh of small lozenges that was patterned across the covers as well as the spine (Roberts & Etherington, 1984: 224; Pearson, 2005: 28). In our volumes, however, a slightly different blind tooling has been applied only to the spine, resulting in a flowery pattern.

Roberts Matt T. and Don Etherington. Bookbinding and the Conservation of Books. A Dictionary of Descriptive Terminology. Washington: Library of Congress, 1982.

Smith, John Chaloner. British Mezzotinto Portraits; being a descriptive catalogue of these engravings from the introduction of the art to the early part of the present century. Arranged according to the engravers; the inscriptions given at full length; and the variations of state precisely set forth; accompanied by biographical notes, and appendix of a selection of the prices produced at public sales by some of the specimens, down to the present time.  4 vols. in 5. London: Henry Sotheran & Co., 36 Piccadilly, 1878-1883.