The volume is richly illustrated with woodcuts placed at the beginning of each book within the Eclogues, Georgics and Aeneid. 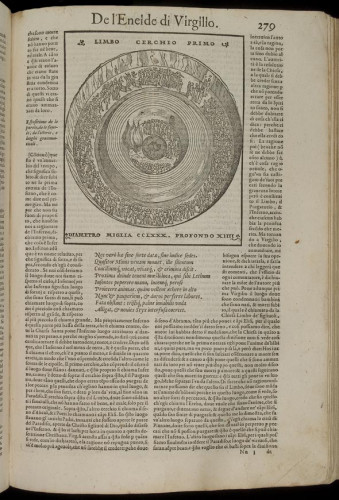 On the title page we can clearly read the following Latin inscription indicating ownership of the book: Ad usum D. Francisci Mariae Senighi. 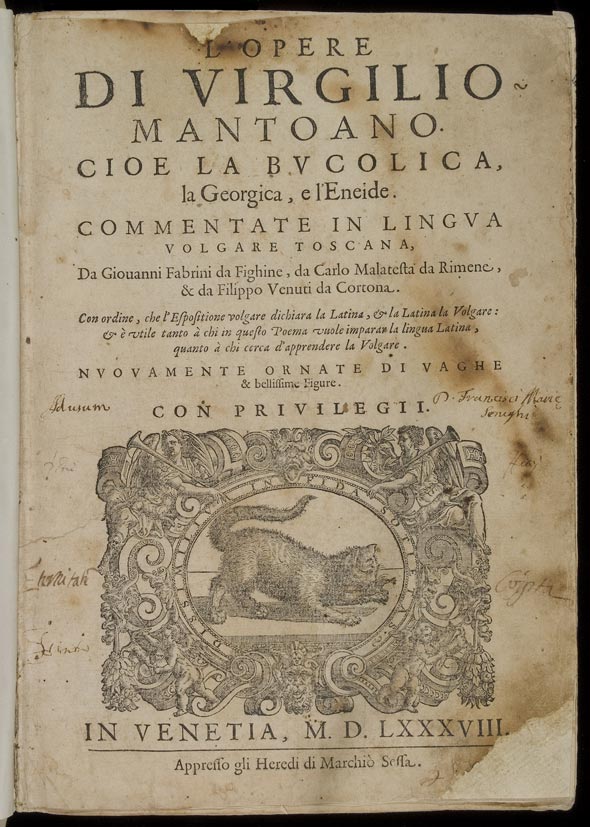 The volume is richly illustrated with woodcuts placed at the beginning of each book within the Eclogues, Georgics and Aeneid. Except for Aeneid 6, where a different set of woodcuts was added, the illustrations are closely based on the woodcuts of the famous Sebastian Brant-Johannes Grüninger edition, published in Strasbourg in 1502 (Rabb, 1960: 187-99). To be precise, Grüninger's illustrations also served as a model for editions of Virgil printed in Italy and France throughout the sixteenth century. For instance, Grüninger's original woodblocks were in the hands of Jacques Sacon in 1517—Opera Vergiliana & familiariter exposita (Lyons: Jacobo Sachon, 1517)— and of Jean Crespin in 1529—Opera Virgiliana cvm decem commentis, docte et familiariter exposita (Lyons: Johannes Crespinus, 1529) (Mortimer, 1964: 537, 538). It is likely that Crespin eventually passed the blocks to Jacopo Giunta at Lyons since in the 1552 Giunta edition of Virgil, the woodcuts of the Eclogues and Georgics were also printed from the Grüninger's blocks—P. Virgilii Maronis opera omnia innumeris pene locis ad veterum Petri Bembi cardinalis et Andreae Navgerii (Venice: Giunta, 1552). The fact that these images produced in 1502 would be reprinted and imitated for almost a century seems to contradict the increasing popularity of certain humanistic principles of art, which advised to depict scenes of antiquity as a world dramatically removed from the present. Instead of a faithful representation of the past, however, the Grüninger images are both anachronistic and old-fashioned in style. As E. P. Goldschmidt masterly argued, it is likely that publishers and editors like Sebastian Brant were strictly concerned with the pedagogical value of these images, disregarding the artistic fashion of the times:

If to us they look very strange, it would be rash to impute their oddity to his ignorance, for Brant was a very learned man. He did not seek to give archaeologically correct representations of the scenes recounted in the Aeneid, he wished to provide easily remembered pictures, utilizing familiar figures and symbols which the pupils' minds would easily comprehend and retain. For instance: Aeneas and his companions are shown in contemporary fifteenth-century clothes and armour, their opponents, however, are always distinguishable, because they appear as 'Saracens', in Oriental costume and with turbans (Goldschmidt, 1966: 48). 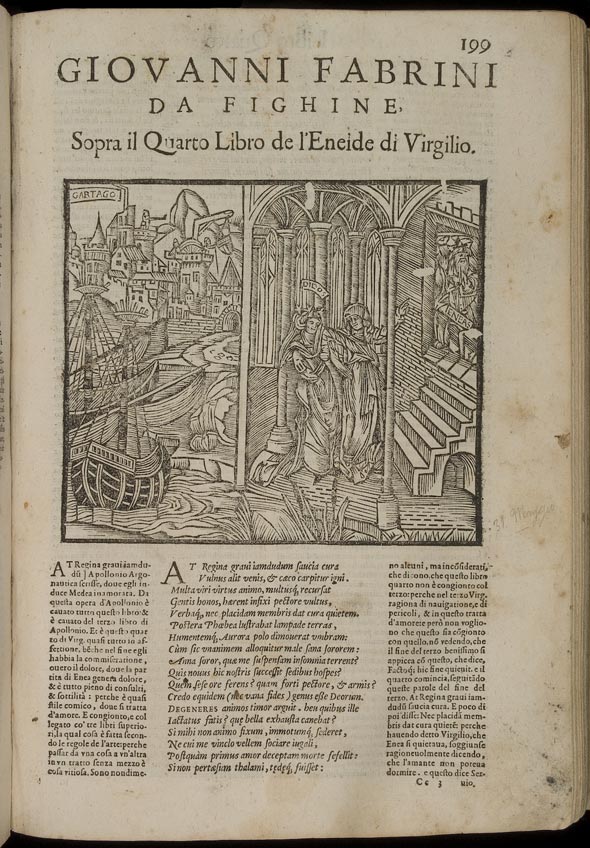 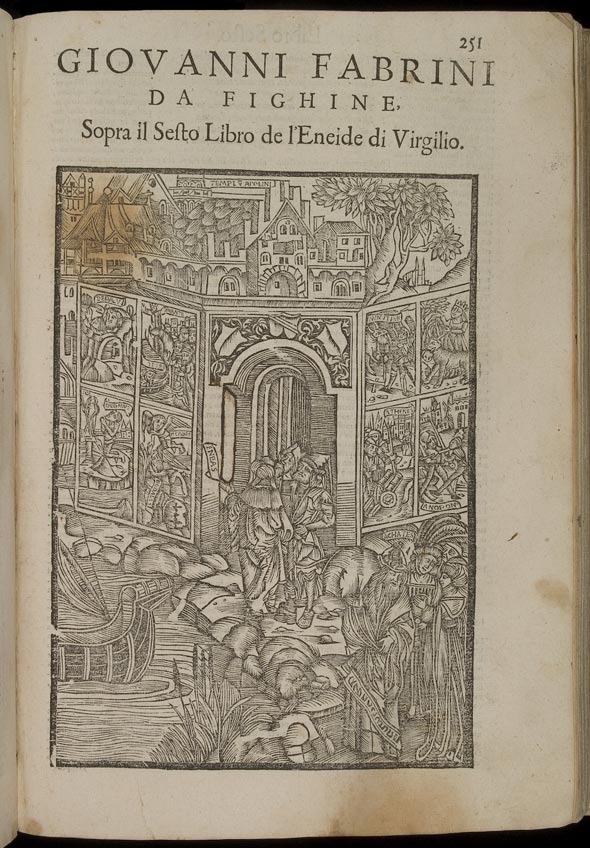 Giovanni Fabrini (1516-1580), one of the editors of our book, began teaching in Venice in the second half of the sixteenth century and published a commentary in Italian to accompany the Latin text of the Aeneid: L'Eneide di Virgilio Mantuano: Commentata in lingva volgare toscana (Gio. Battista Sessa & Fratelli, 1575-6). In fact, Fabrini's commentary only covered the first seven books of the poem, with the examination of books 8-12 supplied by Filippo Venuti (1531-1587). The Sessa publishing house reprinted this edition of the Aeneid in 1588, adding the Eclogues with a commentary by Carlo Malatesta (16th century) and the Georgics commented upon by Filippo Venuti.

The commentary of Fabrini considerably reinforced a long tradition of Christian readings of Virgil. Indeed, from the fourth century onwards, many Christian apologists saw Virgil as a poeta theologus, a prophet whose work had established connections with the Scriptures. For instance, with the exception of Jerome, most of the Fathers of the Church (Lactantius, Ambrose, Prudentius, and Augustine) accepted the view that Eclogue 4 was a Messianic poem announcing the arrival of Christ. Similarly, in the prologue to his edition of the Aeneid, Cristoforo Landino (1424-1504) claimed that, since the writings of pagan authors contained valuable insights into the Christian doctrine, it was absolutely reasonable to search for references of this type in the entire opera of Virgil. Thus, using his Neoplatonist background as well as a philological method that emphasized the role of analogy, Landino produced a fully Christian interpretation of Aeneid 6, where Aeneas's descent to the Underworld is described. On the verse Tros Anchisiade, facilis descensus Averno (Aen. 6. 126), Landino comments that the Underworld is located in the center of the world, as the New Testament teaches (Matt. 12: 40). Moreover, there are five ways to descend to Hell, argues Landino, one of which involves a contemplation of vice that allows the soul to indentify evil and learn how to avoid it; this is the sort of journey experienced by Virgil guided by the Sibyl in book 6 of the Aeneid, and by Dante under the guidance of Virgil in theInferno. Likewise, Fabrini continued this tradition of christianizing Virgil. Actually, he pressed the point even further, often at the risk of being unable to provide convincing evidence. For example, when commenting on Aen. 6. 426-39, Fabrini claims that Virgil was guided by the Holy Spirit and that he had even read the Old Testament (Kallendorf, 1999: 105-18). 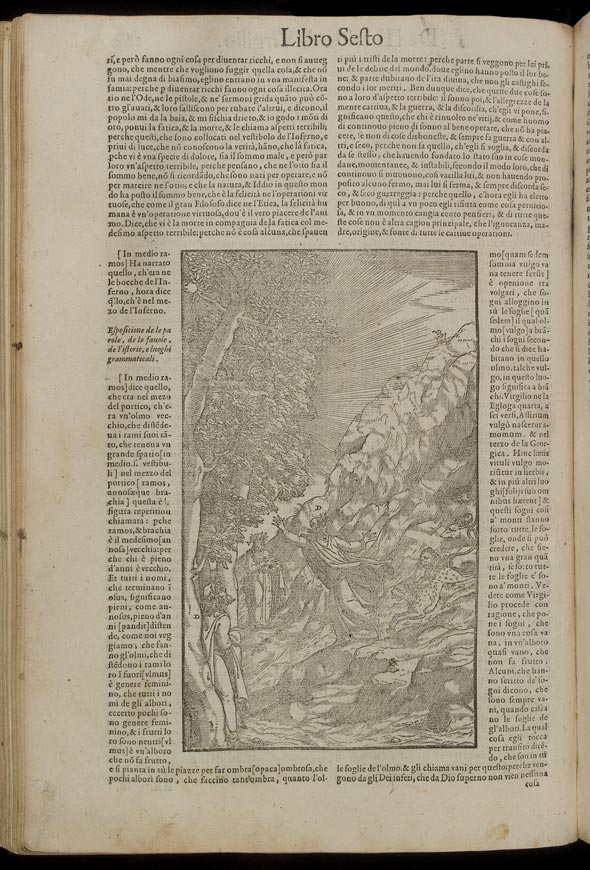 It is interesting to note that a completely new set of woodcut illustrations was introduced in book 6 of the Aeneid. In a style that looks more humanistic and modern than the one shown in the woodcuts derived from the edition of Grüninger, these new illustrations might puzzle the readers of today. In the image displayed above we see a figure labeled D running towards another figure labeled V in an attempt to escape from a leopard, a lion, and a wolf. Certainly, this is an image illustrating the first Canto of theInferno in Dante's Divine Comedy. In fact, this woodcut along with the others included in book 6 were printed with the same woodblocks employed to illustrate Alessandro Vellutello's edition of La Commedia: La Comedia di Dante Aligieri con la nova espositione di Alessandro Vellvtello (Venice: Francesco Marcolini, 1544). While there is no evidence to argue that Fabrini himself was responsible for recycling these woodcuts in his commentary of Aeneid 6, "the systematic visual allusions to the Divine Comedy certainly serve to tighten the link between Virgil's underworld and the Christian hell" (Kallendorf, 1999: 118). 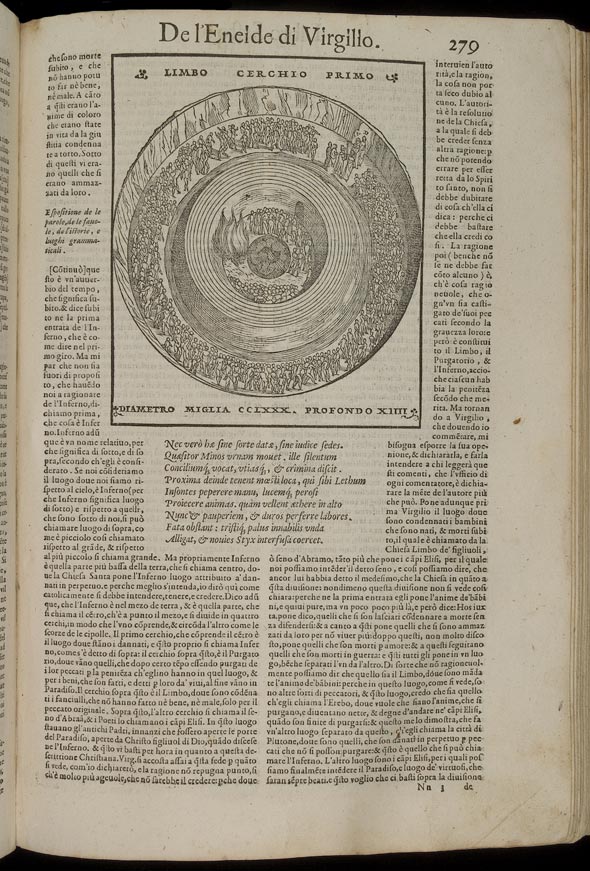 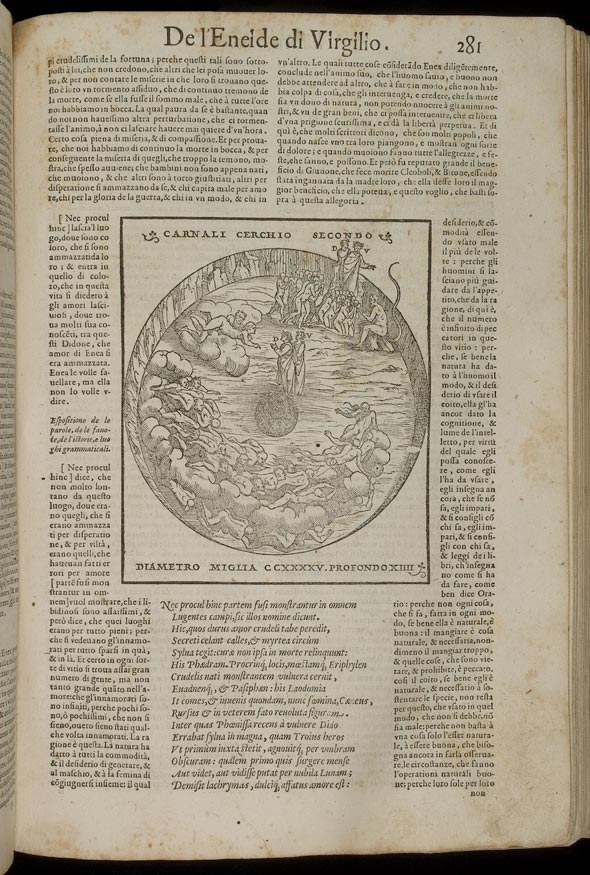 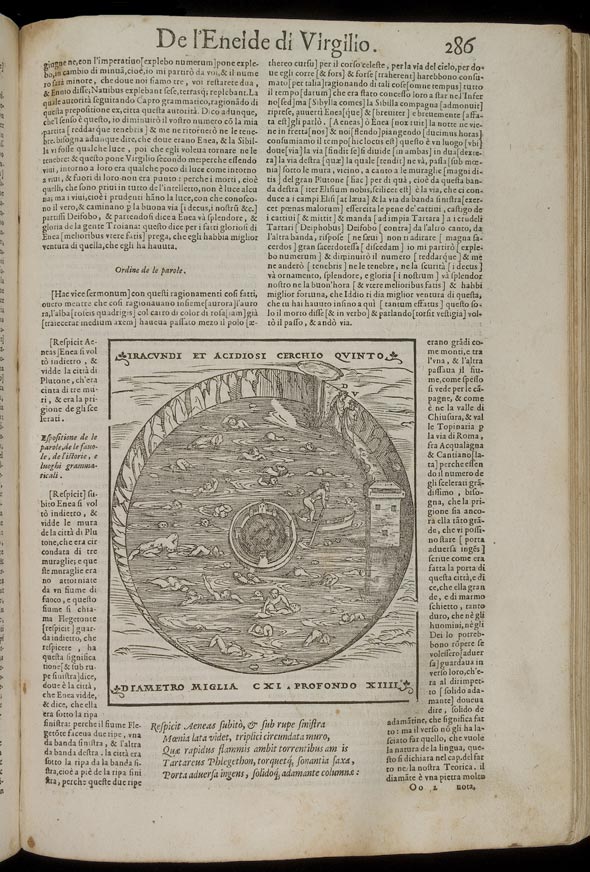 ________. Virgil and the Myth of Venice. Books and Readers in the Italian Renaissance. Oxford: Clarendon Press, 1999.