The astrologer Abū Ma‘shar (Albumasar) was born in Balkh (now northern Afghanistan), a city with a long history of cultural diversity... 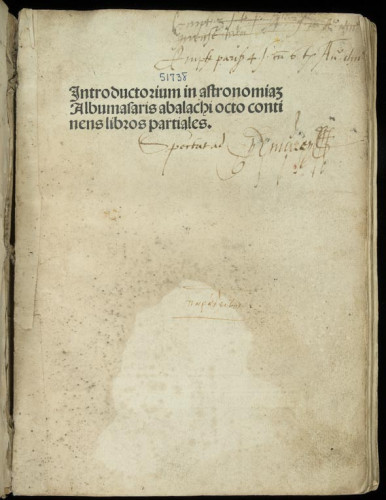 Our copy is bound in contemporary vellum. The pastedowns and endpapers contain manuscript annotations. There are also notes on the title page, and copious marking and marginalia in book 1. This book was bequeathed as part of The Harkness Scientific Library by Rear Admiral William Harkness, M. D., LL. D, Professor of Mathematics USN, Class of 1858, and founding member of the Cosmos Club.

The astrologer Abū Ma‘shar (Albumasar) was born in Balkh (now northern Afghanistan), a city with a long history of cultural diversity, from the third century B.C. as a vibrant outpost of Hellenism throughout the years of the Sassanian Dynasty (205-651), when Indians, Chinese, Scythians, Greco-Syrians and Iranians lived together. During the Caliphate of ‘Uthmān (644-656), when the city fell to the Arabs, the religious communities of Balkh included Jews, Nestorians, Manichaeans, Buddhists, Hindus, and Zoroastrians. In the eighth century Balkh along with other cities of the historic region of Khurasan (a large area east and north-east of the Sassanian Persian Empire) provided the Caliphate of the Abbasids (750-1258) with intellectuals who were politically inclined towards Iranism, were often against their Arab masters, and were religiously disposed to join various heresies such as the Shī ‘a sect. Despite their controversial opinions, these intellectuals from the regions of the former Sassanian Empire actively participated in the cultural life of Baghdad and managed to turn the Sassanian legacy of science and philosophy into an essential part of the Muslim tradition. Committed to the idea of Iranian intellectual superiority, and relying on translations of Sassanian scientific works, Abū Ma‘shar re-examined the Persian intellectual heritage within the broader context of the Greek and Indian traditions of natural philosophy as was common in the intellectual circles of Baghdad at that time. He moved to Baghdad at the beginning of the Caliphate of al-Ma’mūn (813-866), and eventually gained an extraordinary reputation as an astrologer (Pingree, 2008: 32-39). Philosophically, Abū Ma‘shar endorsed the Neoplatonic emanationist view that all systems of thought ultimately derive from a single revelation. As an astrologer, he is best known for his theory that the universe, formed when the seven planets were in conjunction in the first degree of Aries, will end at a similar conjunction in the last degree of Pisces. Abū Ma‘shar's works were originally written in Arabic, and his most influential treatises were Kitāb al-Madkhal al-kabīr ‘alā ‘ilm akḥām al-nujūm (Great Introduction to the Science of Astrology), Kitāb al-qirānāt (Book of Conjunctions), and Kitāb taḥāwīl sinī al-‘ālam (Book of Revolutions of the World-Years).

Written in 849-850, the Great Introduction to the Science of Astrology (Introductorium in astronomiam) consists of eight books dealing with the following subjects: 1) the philosophical and historical truth of the validity of astrology; 2) the numbers and features of the fixed stars and the zodiacal signs; 3) the influence of the seven planets on earth; 4) the astrological nature of the planets; 5) the connection between planets and their zodiacal signs; 6) the relations between zodiacal signs; 7) the strengths of the planets and their relations with each other; and 8) the astrological lots (Pingree, 2008: 35). Around the year 1000 large portions of the Great Introduction were translated into Greek, and the entire treatise was translated into Latin by Johannes Hispalensis (John of Seville) (Robinson. 2003: 443-70) in 1133 and, with some abridgements, by Hermannus Dalmata (Hermann of Carinthia) in 1140. The latter translation was first printed by the German printer Erhard Ratdolt in 1489, of which our Collection Highlight is an example, and then again in 1495. In the image displayed below, we can appreciate how the printer has carefully designed the layout of the text so the reader is introduced to the different topics (capitula) within each of the eight books (libri). For the first book, for example, we have five chapters that cover the following topics: on the invention of astrology (Primum de inuentione astrologie), on the effect of the movements of the stars (Secundum de siderarum motus effectu), on the quality of their effect (Tercium de effectus qualitate), on the confirmation of astrology (Quartum de confirmatione astrologie), and on the usefulness of astrology (Quintum de utilitate astrologie). 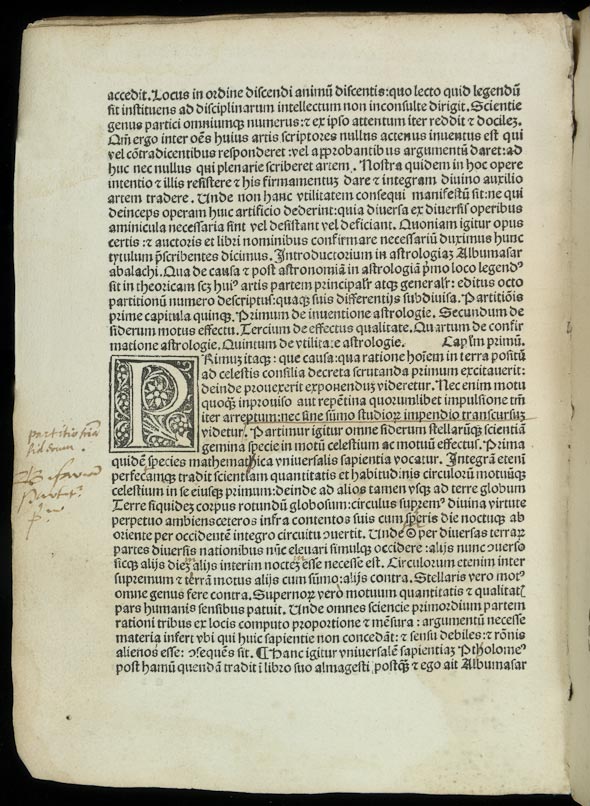 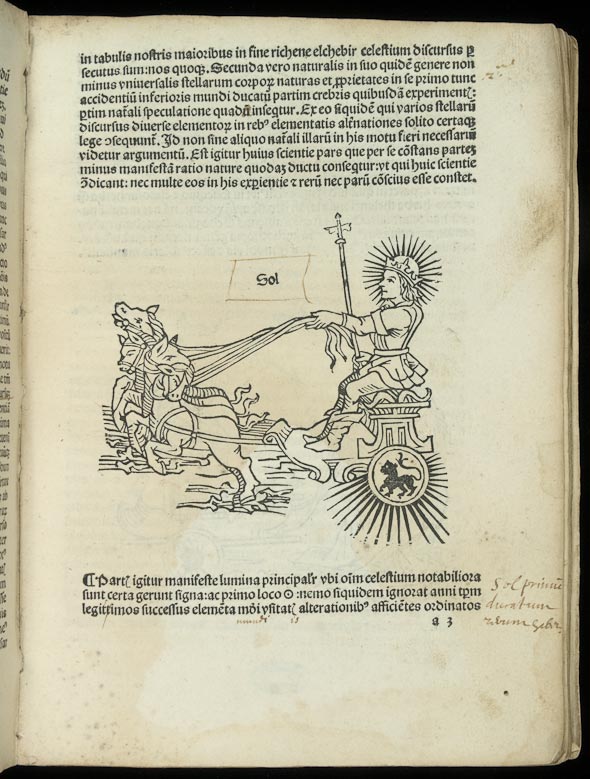 A striking feature of this edition is the large number of woodcuts representing astrological graphics, zodiac signs, and planets. Many of them are personifications wearing fifteenth-century garments, probably as an attempt of the publisher to present the subject of astrology in an educational context as it was often done with works of literature such as Virgil's Aeneid. 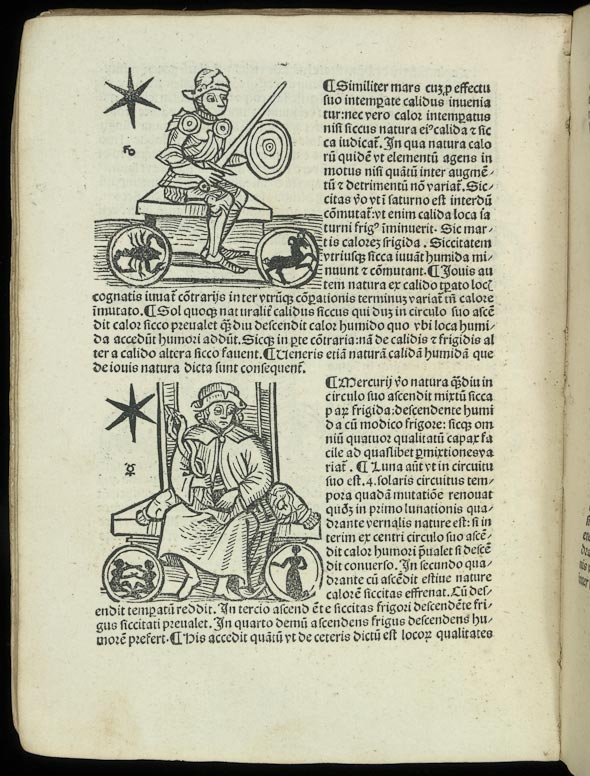 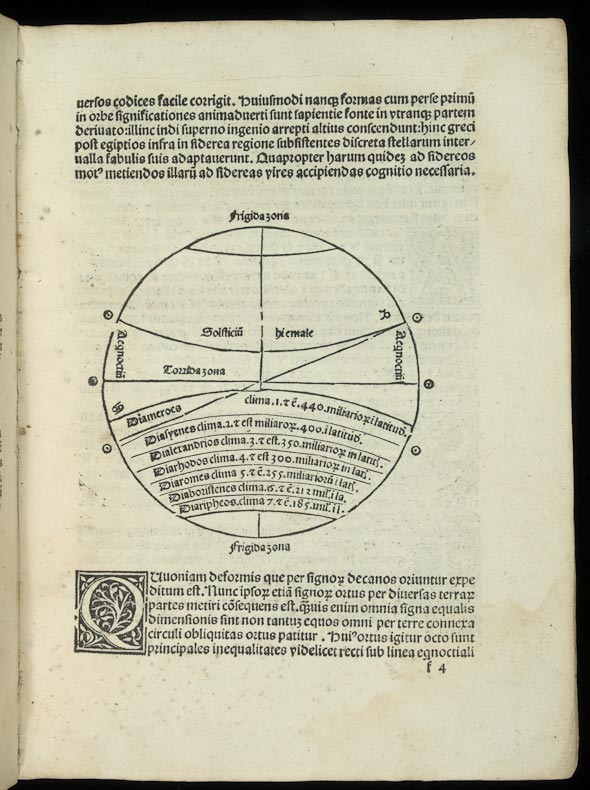 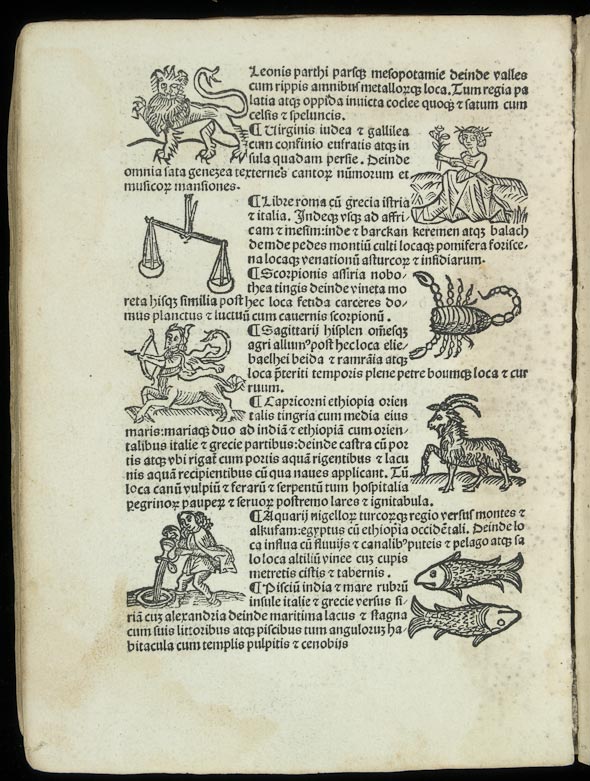