The production of the first edition of Pope’s translation of the Iliad was commercially pioneering. 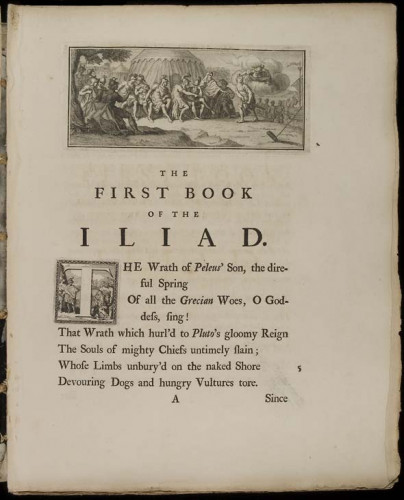 The editio princeps of the text of the Iliad and the Odyssey appeared in 1488: Opera. Florence: Bernardo and Nerius Nerlius; Batolommeo Di Libri, 1488. The editor was the Byzantine scholar Demetrius Chalcondylas (1423-1511), who was born in Athens and educated in Constantinople. In the first five decades following the appearance of the Gutenberg Bible, a total of 25 editions of the Homeric texts were printed. However, this figure was still comparatively small if we think of the 552 editions of Aristotle, or the 202 of Virgil (Young, 2003: 96; Jones, 2004:1-23).

The demand for Homer considerably increased in the sixteenth century. A total of 246 editions gives an average of two and half per year. For instance, the Aldine Press produced three editions, in 1504, 1517, and 1524. Four editions appeared in Strasbourg between 1525 and 1550, and two editions in Basle in 1535 and 1541. Undoubtedly, Homer eventually became the leading Greek author in the Renaissance curriculum, as he had enjoyed a similar primacy in the scholarly tradition of antiquity. The first English translation of Homer consisted of the first ten books of the Iliad by Arthur Hall in 1581, although instead of using the original Greek text, he based his version on the French translation of Hugues Salel printed in 1555. It seems that Hall’s motivation for undertaking this task was to please his patrons, the Cecil family, as a tool to obtain protection in a life that was notorious for troubles with the law (Young, 2003:97-101).

George Chapman (1559-1634) was the first renowned translator of Homer into English. Editions of his version have continued until today! Chapman actually used the edition of Jean Sponde published in Basle in 1583, which, like many early editions, contained a Latin translation along with the Greek text. Chapman also consulted lexicons, commentaries, and translations in other languages with the result that, rather than engaging with the original Greek, his translation was a compilation of various sources (Young, 2003: 101-6). 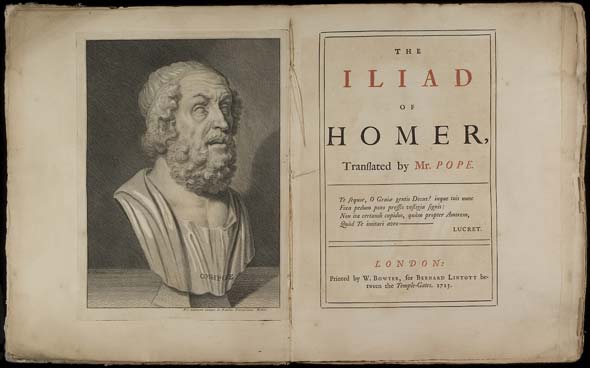 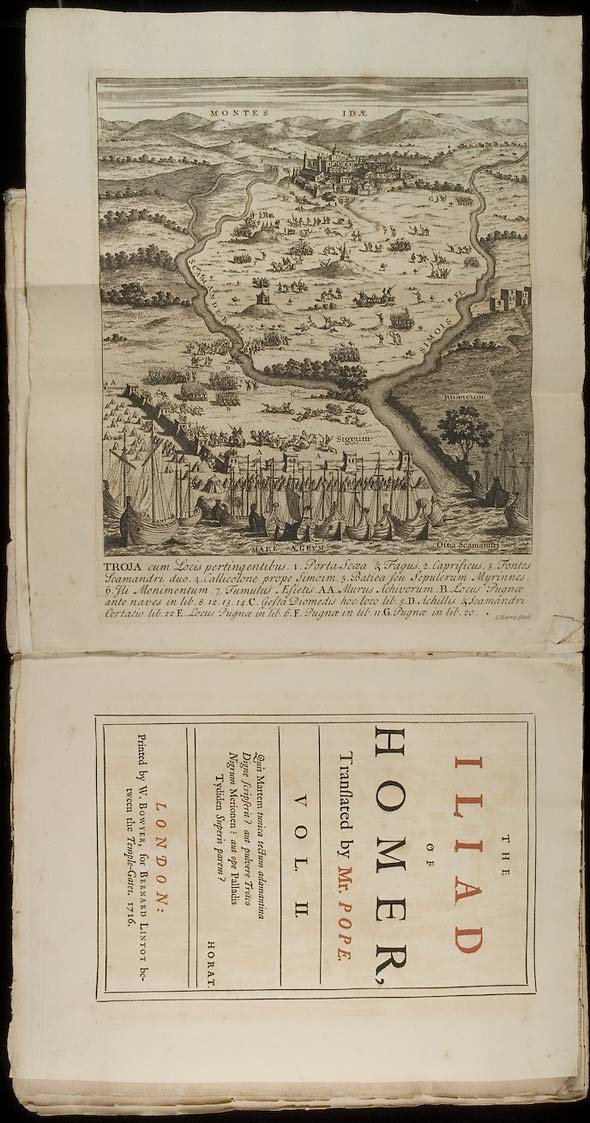 All of the major facts of Pope’s life suggest that he was an outsider in his own society, struggling for acceptance and using his literary talents to obtain financial independence. From childhood he suffered from tuberculosis of the spine (Pott’s disease), which resulted in physical deformity and stunted growth. Being a Catholic barred him from attending English universities or from taking positions reserved for men of his own class, such as naval or military commissions. Besides, his poor health and financial difficulties, due to penalties imposed upon Catholics, prevented him from enrolling in a European university. To make matters more complicated, he was a Tory in an era of long Whig political hegemony.

Pope’s method of translating the Iliad to a great extent resembles that of Chapman’s. In the eighteenth century, except for the professional scholar, any educated person would use a bilingual edition, with the Greek on one page and a word-by-word Latin translation on the other. The Latin version worked as a guide that artificially replicated the Greek word order and compounds. Additionally, Pope consulted all the available translations as well as scholarly commentaries that had been written on the Homeric poems since the twelfth century. From this scholarly apparatus he borrowed the notes on Homer’s life, geography, history, and morals. The translation was immediately received as a literary masterpiece. Actually, instead of attempting to compose a scientifically accurate version of the original Greek, Pope did not hesitate to take liberties with the Homeric text, using a fashionable style and a poetic form greatly admired by his contemporaries: the iambic pentameter couplet (Young, 2003: 113-119).

The production of the first edition of Pope’s translation of the Iliad was commercially pioneering. Surely, these six volumes were published annually at a time when the publication of works in installments was becoming popular. However, the idea of publishing a canonical opus in six annual volumes rather than in one or two large folios, as had been done in the preceding decades —see, for instance, Ogilby’s translation of the Iliad and Dryden’s translation of the works of Virgil in previous features of the Book of the Month—was an extraordinary novelty in the publishing industry. Designed to reduce capital investment significantly, this method allowed the publisher, Bernard Lintot (1675-1736), to pay for the production of only one volume, the sales of which would eventually provide the capital for the second volume, and so on to the sixth and last. Indeed, the success of this system depended on the abilities of authors and publishers to gather a fair number of subscribers in order to finance the projected volumes.

There are two extant copies of the Iliad contract signed by Pope and Lintot on 23 March 1713/14. Pope’s copy is currently held at the British Library (Egerton Charter 128) and the one kept by Lintot is at the Bodleian Library (MS Don. a. 6) (McLaverty, 1993: 207-8). Specifically, the contract stipulated that Pope would translate the Iliad into English verse and provide the scholarly apparatus for an edition of six volumes. In return, Lintot agreed to provide Pope with 750 copies of each volume on a royal paper; they would be printed in a new typeface, whose kind and size would be selected by Pope:

Lintot also agreed not to print other copies on the same paper, or with any sort of engravings:

Lintot could not sell other copies through the usual mechanism of the trade until one month after Pope’s 750 special subscribers’ copies had been delivered:

Lintot also agreed to pay 200 guineas for each volume as copyright money.  100 would be paid in advance, and 100 on delivery of the copy. Overall, the contract predicted that Pope would receive a total of ₤1,290 copyright money, and ₤ 4,837 from the sale of the 750 copies of each volume. Pope made around ₤ 5,000, enabling him to lease his villa at Twickenham and to establish a life of retirement:

192. I had once a design of giving a taste of all the most celebrated Greek poets by translating one of their best short pieces, at least, from each of them: a hymn of Homer, another of Callimachus, an ode or two from Pindar, and so on. And should have done so had not engaged in the translation of the Iliad.What led me into that, which was a work so much more laborious and less suited to my inclination, was purely the want of money. I had then none—not even to buy books (Spence, ed. Osborn, 1966: 82).

Details of the subscription scheme were first published as part of a two-page advertisement inserted at the end of Lintot’s third edition of Pope’s The Rape of the Lock(1714) (Griffith 35; Foxon P944):

Proposals for printing, by Subscription, a Translation of Homer’s Iliad into Verse and Rhime. By Mr. Pope. To which will be added, explanatory and critical Notes; wherein the most curious and useful Observations, either of the Ancients or Moderns, in relation to this Author in general, or to any Passages in particular, shall be collected and placed under their proper Heads.

This Work shall be printed in six Volumes in Quarto, on the finest Paper, and on a letter new Cast on purpose; with Ornaments and initial Letters engraven on Copper. Each Volume containing four Books of the Iliad; with Notes to each Book.

It is proposed at the rate of one Guinea for each Volume; The first Volume to be deliver’d in Quires within the space of a Year from the Date of this Proposal, and the rest in like manner annually; Only the Subscribers are to pay two Guineas in hand, advancing one in regard of the Expence the Undertaker must be at in collecting the several Editions, Criticks and Commentators, which are very numerous upon this Author.

A third Guinea to be given upon delivery of the second Volume; and so on to the sixth, for which nothing will be required, on consideration of the Guinea advanced at first. Subscriptions are taken in by Bernard Lintott.

The subscription list reads like an eighteenth-century version of Who’s Who in Britain. Her Royal Highness the Princess is listed, along with seventeen dukes, three marquises, forty-nine earls, seven duchesses, one marchioness, and eight countesses. This list is also evidence of how newly printed books could become useful tools for patronage. Some subscribers financially supported Pope’s enterprise by purchasing several sets of copies but accepting only one or two. Others bought two or more sets because they wished to use these luxury volumes as gifts to friends or potential patrons (Rogers, 1978: 7-36; Mack, 1985: 266-72; Foxon, 1991: 51-63). 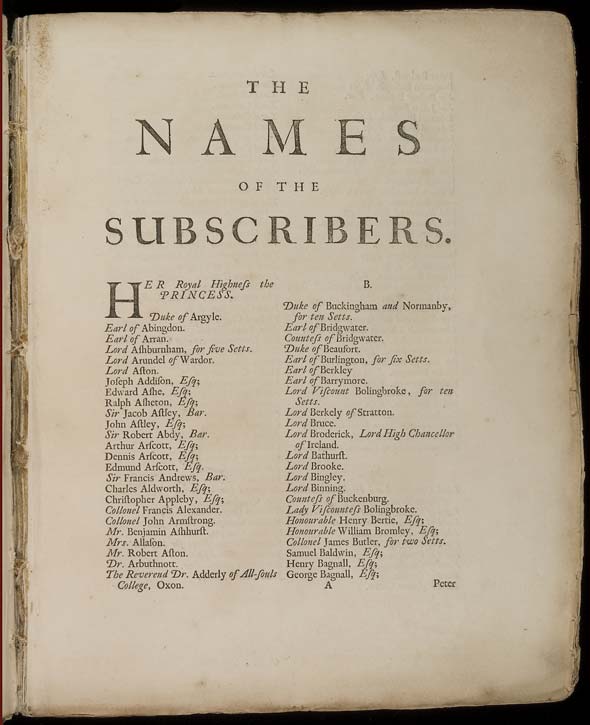 Pope and the printer William Bowyer (1663-1737) together planned the design of the page, which follows a regular pattern through the six volumes. Each book of the Iliad opens with two engravings, a pictorial headpiece and an initial letter. Facing this is a page containing “The Argument,” or brief summary of the book, with a headpiece composed of varying designs of printer’s flowery ornaments. Next, the “Observations”, or scholarly commentaries on each book, would follow a similar pattern. 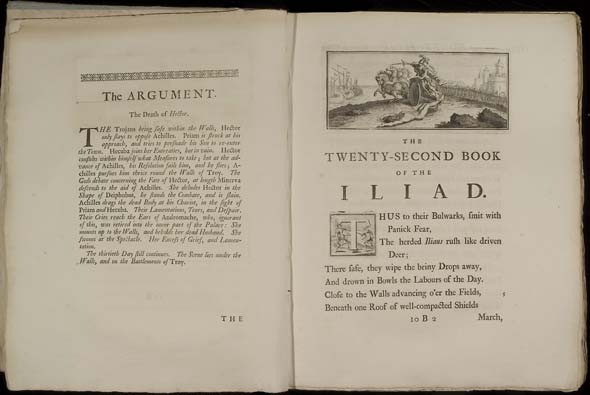 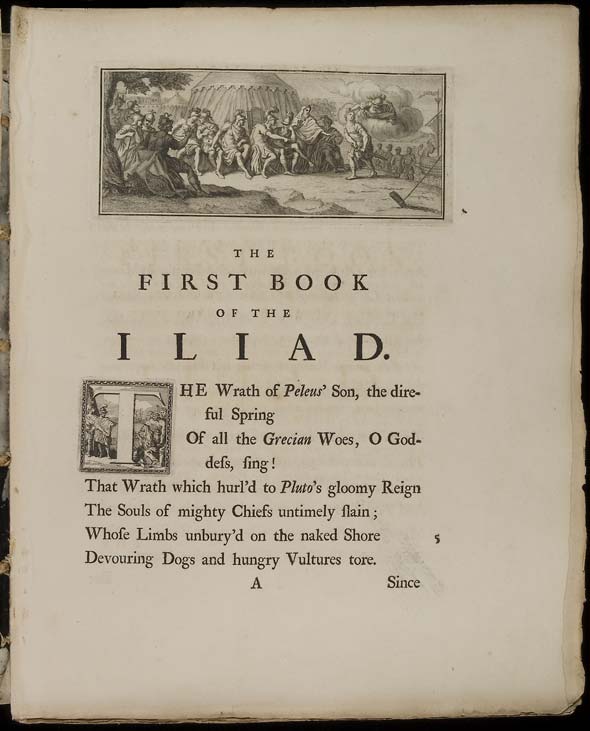 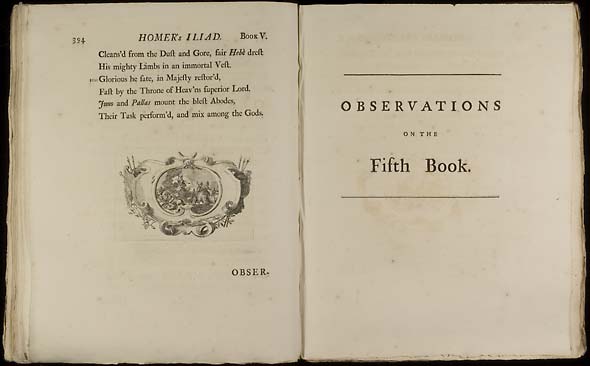 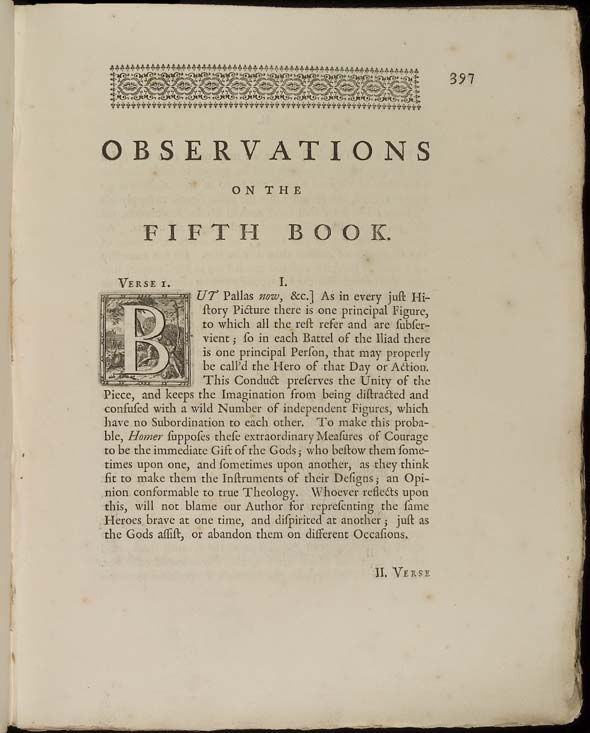 While the traditional layout included a full page engraving facing a page with an engraved headpiece and initial—as we can see in Ogilby’s publications—Pope placed the engraved illustration within the headpiece itself, bringing engraving and letterpress into a close relationship. Many of these headpieces were inspired by the illustrations of Ogilby’s edition. For instance, the engraved initials from book one and twenty-two of Pope’s Iliad are based on the plates illustrating the respective books in Ogilby’s Iliad. Regarding these borrowings, we should remember that Ogilby’s translations were greatly admired by Pope and his contemporaries. According to Joseph Spence’s collections of anecdotes, Pope read Homer at the age of eight:

30. Ogilby's translation of Homer was one of the first large poems that ever Mr. Pope read, and he still spoke of the pleasure it then gave him, with a sort of rapture only on reflecting on it.
"It was that great edition with pictures. I was then about eight years old. This led me to Sandy 's Ovid, which I liked extremely, and so I did a translation of part of Statius by some very bad hand" (Spence, ed. Osborn, 1966: 14).

Finally, this edition represents a major aesthetic innovation in the history of English printing: A canonical work is published in a quarto format! In England, the complete works of major writers such as Chaucer, Ben Jonson, and Shakespeare had been traditionally printed in folio. By choosing the quarto format for the translations of the Iliad and, eventually, the Odyssey, Pope was introducing a new trend that had already taken place in France around the middle of the seventeenth century. In truth, Jacob Tonson (1655/6-1736) had anticipated this evolution in taste by publishing some illustrated editions of the classics in octavo and quarto formats (McKenzie, 2002: 122-5). In this context, it is not surprising that the quarto format would be also chosen for the publication of the four-volume edition of Don Quixote in London in 1738. Furthermore, one can easily appreciate how this edition of the Spanish novel overall echoes the typographical design of Pope’s Iliad, a good example of how the aesthetics of printing can contribute to the intellectual agenda behind this publication: the canonization of Cervantes.

McLaverty, James. “The Contract for Pope’s Translation of Homer’s Iliad: An Introduction and Transcription.” The Library: Transactions of the Bibliographical Society (15:3, Sept. 1993): 206-25.

Young, Philip H. The Printed Homer: a 3,000 Year Publishing and Translation History of the Iliad and the Odyssey. Jefferson, NC, and London: McFarlane & Company, Inc., Publishers, 2003.