Collection Highlight: Francis Bacon's History of the Reigns of...

The History of Reading is a relatively new field that has generated an increasing number of followers, especially among those interested in reception.

The History of Reading is a relatively new field that has generated an increasing number of followers, especially among those interested in reception theory and book culture in general. However, there are critics who seriously challenge the idea that we will ever be able to evaluate readers' responses through the ages accurately. They are certainly right in emphasizing the fact that only a small portion of manuscript and printed books contain marginalia revealing the reader's reactions to the text. Nevertheless, admitting the limitations of the extant evidence, it is still worth analyzing those examples that consistently reflect reading habits in a particular period. For instance, it seems clear that there were certain expectations about how sixteenth-century scholars would engage with the text. After the introduction of printing in the second half of the fifteenth century, the availability of books considerably increased, obliging readers to create strategies to cope with what we would now describe as "information overload". Marginalia, manicules, brackets, and underlinings, are just the most vivid examples of marks especially designed to remind the reader which quotations or passages to use in the sometimes overheated scientific and religious debates of the sixteenth century. Thus, detaching himself from a medieval model of education based on a complex system of mnemonics, in his De ratione studii Erasmus of Rotterdam prescribed the following method for indexing books:

"Informed then by all this you will carefully observe when reading writers whether any striking word occurs, if diction is archaic or novel, if some argument shows brilliant invention or has been skillfully adapted from elsewhere, if there is any brilliance in the style, if there is any adage, historical parallel, or maxim worth committing to memory. Such a passage should be indicated by some appropriate mark. For not only must a variety of marks be employed but appropriate ones at that, so that they will immediately indicate their purpose (Thompson, 1978: 670)." 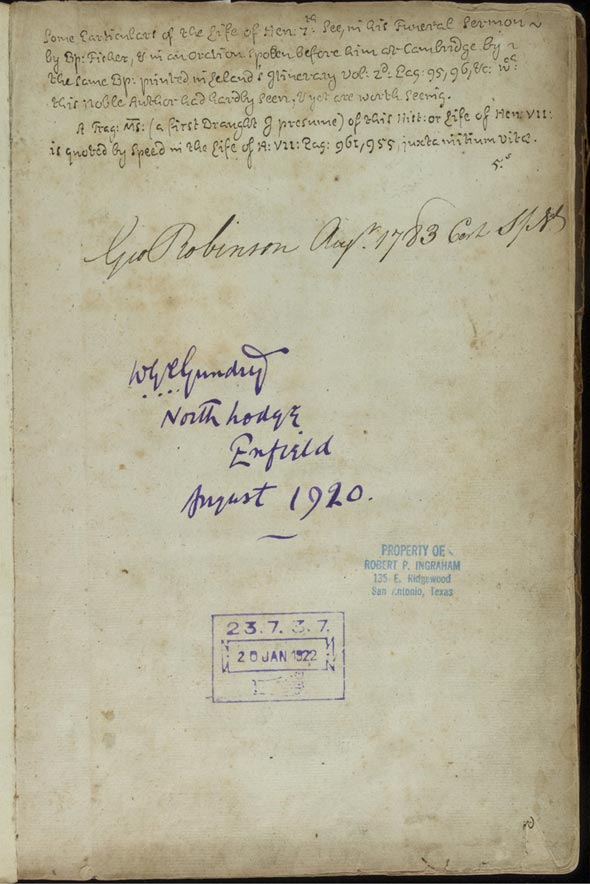 Moreover, even if we only encounter brief ownership notes or the markings of official censorship, these annotations can be still useful to reveal fascinating stories regarding literary taste and the social and religious backgrounds of previous owners. Notes could be formal, like those dedications found in prize books awarded to the best student of a particular class, or extremely controversial, such as the notes William Blake included in his copy of the first edition of The Works of Sir Joshua Reynolds(1797). In the title page of the first of two volumes, Blake wrote: "This Man was Hired to Depress Art. This is the Opinion of Will Blake; my Proofs of this Opinion are given in the following Notes."

Our Collection Highlight was extensively annotated by the nonjuring Church of England clergyman and antiquary Thomas Baker (1656-1740). To be precise, within this volume he exclusively annotated Francis Bacon's The History of the Reign of Henry the Seventh. 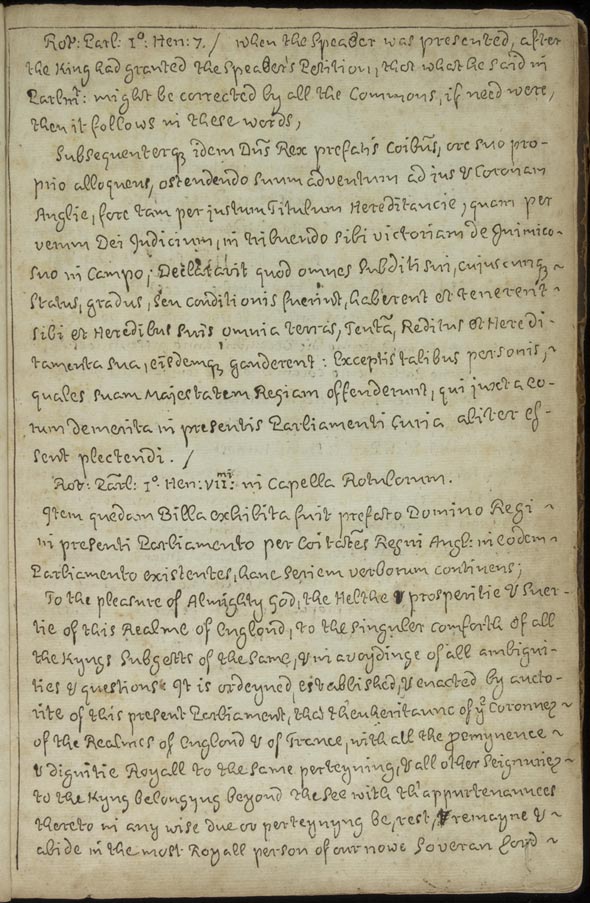 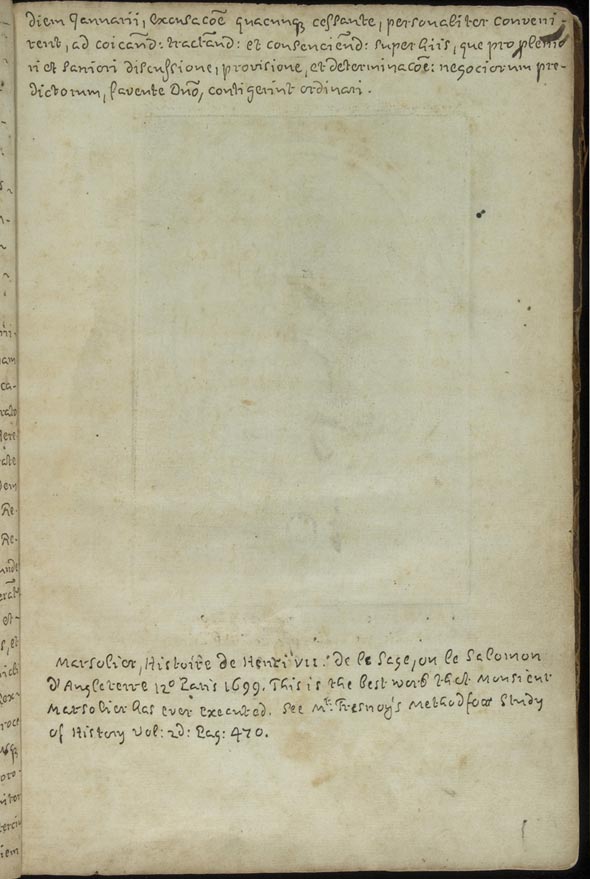 At the age of seventeen, Thomas Baker went up to St John's College, Cambridge, where, apart from an absence of three years, he would spend the rest of his life. He graduated BA in 1678, was elected Ashton fellow in 1680, and received his MA in the following year. Along with Joshua Barnes (1654-1712) and Matthew Prior (1664-1721), Baker contributed to a collection of poems by members of the University of Cambridge to commemorate the death of Charles II and the accession of James II:Moestissimae ac Laetissimae Academiae Cantabrigiensis Affectus, Decedente Carolo II. Sucedente Jacobo II (Cambridge: Joan. Hayes, 1685). He was ordained priest on 9 December 1686, and in June 1687 he was appointed rector of Long Newton in the diocese of Durham by Bishop Nathaniel Crewe, a position he had to abandon on 1 August 1690 because he refused to swear loyalty to the new king William III, arguing that his oath to James II was sacred. While he remained a nonjuror until his death, he was not a Jacobite as he strongly criticized James' attempts to restore Catholicism in England (Korsten, 1990: xi-xii).

Since Baker obtained his BD degree shortly before the so-called Glorious Revolution of 1688, he managed to keep his fellowship at Cambridge. Over the next decade, he became increasingly alarmed by the opinions of those scientists and philosophers who were challenging the role of divine revelation in the acquisition of knowledge. In order to show the view that human knowledge is fundamentally defective without the intervention of God, Baker wrote Reflections upon Learning, wherein is shewn the insufficiency thereof, in its several particulars. In order to evince the usefulness and necessity of revelation. By a gentleman (London: A. Bosvile, 1699). It became an extremely popular book that saw eight editions before 1760. During the first decade of the eighteenth century he fully engaged in historical and antiquarian research, especially in studies related to the history of his college and the university. However, he never published his history of St John's College, of which he had finished a draft by the end of 1705. In fact, his only publication as a historian and antiquarian was a long preface to a reprint of Bishop John Fisher's The Funeral Sermon of Margaret, Countless of Richmond and Derby, mother to King Henry VII, and foundress of Christ's, and St. John's College in Cambridge (London: A. Bosvile, 1708). On 21 January 1717 Baker was deprived of his Cambridge fellowship as he again refused to take the oath of abjuration. Between 1717 and his death in 1740, he went through all his manuscript and books to add the following words as a testimony of what he considered the ultimate betrayal by his alma mater: Thomas Baker Collegii Johannis Socius Ejectus. Indeed, these words were also inscribed in the title page of our copy (Korsten, 1990, xiii-xxxii).

Despite his modest resources as a university fellow, Baker managed to accumulate an extensive library of around 5000 volumes. Like our copy, many of his books bear his annotations, revealing Baker's skills as a bibliophile and historian. Essentially, he intended his annotations to be a guide for future readers. They echo his verdict on the book in question, being especially critical of those historians who, like Francis Bacon himself, neglected the close scrutiny of primary sources and wrote in an highly rhetorical style. For instance, regarding our copy, Baker used several blank leaves, probably added when the book was bound, to include advice on further reading: "Some particulars of the life of Hen: 7th: See, in his Funeral Sermon/ by Bp: Fischer, & in an oration spoken before him at Cambridge by/ the same Bp."; He transcribed parliamentary documents, which apparently Bacon failed to use, and highly recommended Jacques Marsollier's Histoire de Henry VII: "This is the best work that monsieur Marsolier ever executed." Furthermore, he offered his blunt opinion on Bacon's book:
"This History, tho' finely wrote, yet I always look upon it,/ rather as a Picture drawn of a Political Prince, then a History/ exactly true. More vouchers, & fewer speeches would have given it more strength, tho' less beauty." 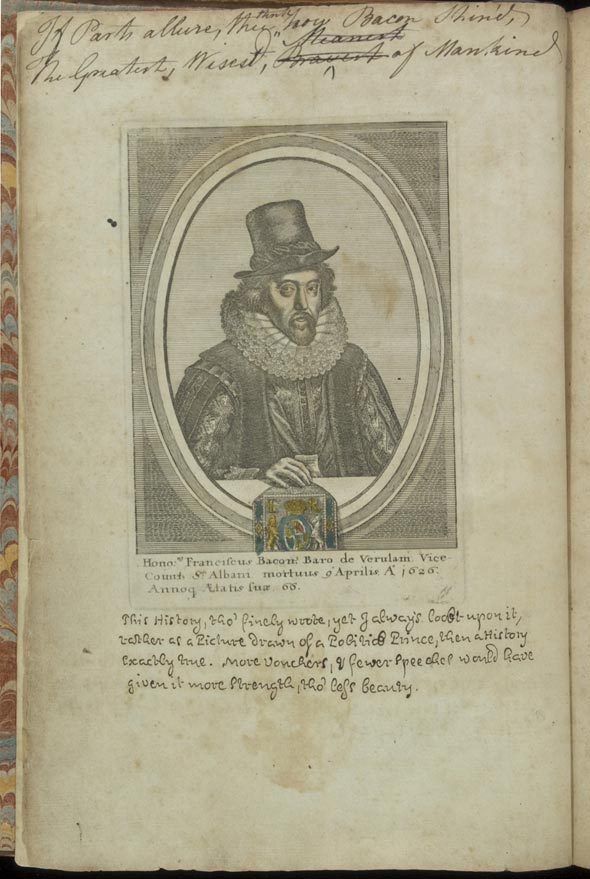 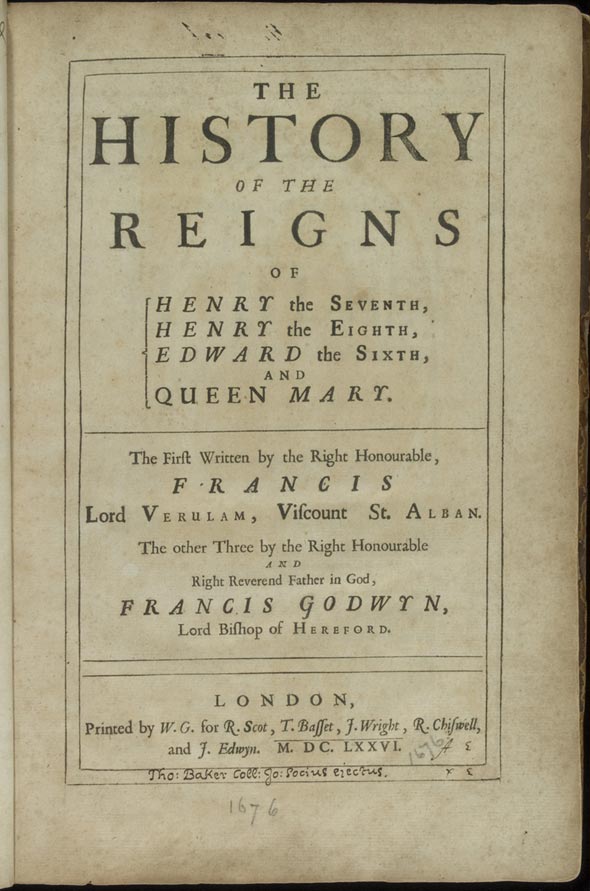 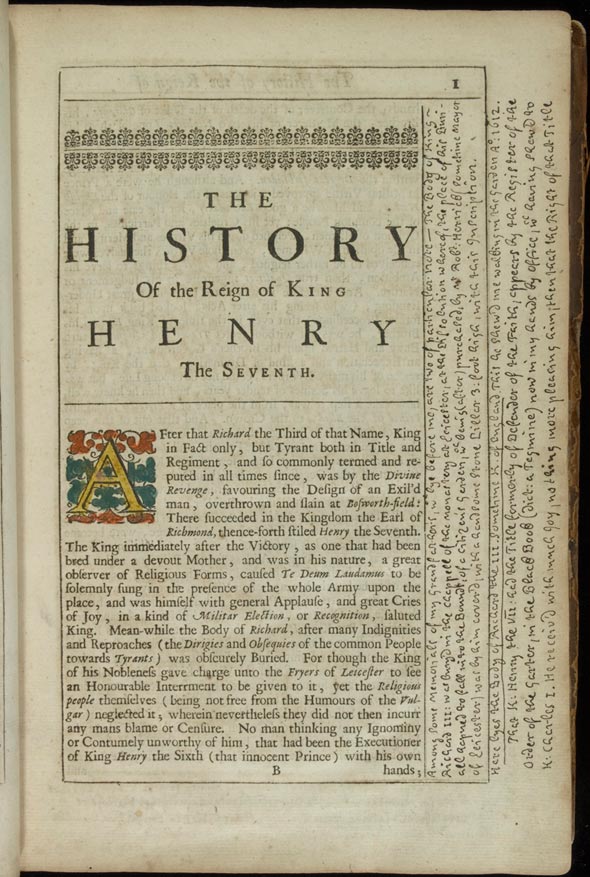 In their search for a History of Reading, scholars will need to decide whether this and other examples of Thomas Baker's marginalia are evidence of a distinctive intellectual practice widely spread in the seventeenth and eighteenth centuries. To what extent was Baker a follower of Erasmus's precepts?

Dennis, Rodney G., Elizabeth A. Falsey & Houghton Library, ed. The Marks in the Fields: Essays on the Uses of Manuscripts. Cambridge, MA: Houghton Library: Distributed by the Harvard University Press, 1992.

________. "The Humanist as Reader." In A History of Reading in the West. Ed. Guglielmo Cavallo & Roger Chartier. Trans. Lydia G. Cochrane. Studies in Print Culture and the History of the Book. 179-212. Amherst, MA: University of Massachusetts Press, 1999.